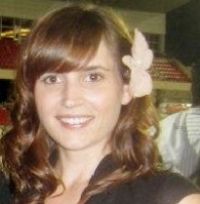 I am Kandace Hawley from Kentucky, U.S.A. I am a graduate student at the University of Oulu in Finland. I study international educational policy. I travel quite a bit and I do not plan on returning to the U.S.A to settle upon graduating or anytime soon. Although my identity rests in America, I hardly adhere to the American lifestyle or dream. My expat journey has just recently begun.

The story of how I ended up in Finland is unique. I had never expected that I would move here. While living and working in Mexico, I met a handsome Finnish lad on his vacation on Christmas night. We started a relationship in Mexico and departed for our home countries (my stay in Mexico was ending at that point).We had a skype relationship for five months in the spring of 2013. I came to Finland to spend the summer with him and during that summer, I decided to stay and study here. I had originally planned on returning to study at a very prestigious university in my home country but the thought of settling two years in the United States was not to my liking (amongst the thought of leaving the handsome Finnish lad).

I started my graduate studies in the city of Oulu in September and my summer here ended up being a minimum of two years.

Funding. Although it is quite cheap to be a student here with government subsidized living and food, it is still expensive to live in Finland. Also in my case, I did not plan on staying here so I had not prepared myself financially. I have exhausted many resources to stay here and that was the biggest challenge I have faced.

Another small challenge was obtaining the residence permit or the student visa. However, I believe in comparison to other countries, I didn’t have to jump through as many hoops. Nonetheless, gathering all the documents and submitting them was no simple task, especially when Finns highly rely and refer many to their “well explained” websites to get information or instructions.

At the beginning of my stay, I lived with my boyfriend. However, when it came time to move to the city in which I would study, we both were clueless on housing. At that point, I contacted my school and my student tutors (they are responsible for handling all issues/concerns with incoming students). I was referred to a student housing company. I filled out an application and they reserved housing for me. My apartment is awesome. I am super pleased with it.

I must say that I have not met many expats in my area. It is a cold, expensive country in which the people speak a very difficult language. So I would assume, it is rather difficult to expatriate to Finland which in-turn, defers many expats. The American expats that I have met have similar stories as I do. They moved for love.

However, at school, I am in a program with other international students. I would hardly call them expats. They are here to study and take full advantage of the educational system which doesn’t charge a dime of tuition, even for internationals. Many that I have met plan to leave Finland after their studies.

My relationship with the locals is more fruitful than the ones many international students create with the locals here. This is due to the relationship that I have with a Finn. My boyfriend and his family have become my Finnish family. Thus, I have a higher sense of cultural awareness than most internationals that come here. For that reason, I believe that I find Finns more approachable than most.

However, the close friends that I have made here are not Finnish but are international students. I have many Finnish acquaintances but I have not created any deep friendships with any local here. It is quite difficult because Finns, in general, are very shy and it takes some time to create a strong friendship with one.

Three words: nature, truthfulness, and sauna. Finns are nature-loving folk and regardless of the weather, they are outside. There is a deep appreciation for nature. Finns believe that nature is a human right, so regardless if it is private property, the owners tend to share that same sense of rightfulness and allow people to roam freely on their land. Also the country is loaded with lakes, forest, and fresh air.

Furthermore, Finns are very genuine and honest. They say what they mean and always choose their words carefully. I highly admire the culture for that.

Lastly … SAUNA! The sauna is highly Finnish. The Finnish home is not complete without a sauna. I was introduced to the ritual the week I arrived and there is nothing more invigorating and relaxing than sitting naked with strangers in a sauna. True story.

I dislike certain inconveniences that come with being a non-citizen. In the U.S., I could find a job easily and make some income for I am a citizen. However, it is difficult to find employment if you’re not a Finn. Many foreigners do not speak Finnish and it is a difficult language to learn, thus language affects employability. I am very dependent on outside help to be here which I wouldn’t be in the U.S.

Also the language barrier does create a sense of exclusion. Most Finns speak English but it is hard to feel included in the culture without knowing Finnish. My boyfriend really tries to make me feel included with his friends because he knows that Finns can be relatively closed-off individuals.

I would advise Finland-bound expats to review their finances and to not depend on the notion of “finding employment once there.”

Although all the aforementioned statements about Finnish culture may seem scary, I promise it is not so bad. Yes, many Finns are shy and in a shell, so to speak, but they are extremely nice people. In order to have better relationships with Finns, I suggest the following, “You go to Finns, for Finns do not come to you.” Parties and drinking events are the best way to get social with Finns. Although in my opinion this is quite sad, the truth is that Finns drink in order to be social unlike many other cultures that simply drink socially.

Lastly, learn some Finnish. Finns appreciate it and it will give those coming to this cold country a sense of cultural inclusion. It is a difficult language but if I can do it, I believe anyone can.

I have a future here in Finland. I plan to graduate and find employment here. It will be hard but I am optimistic because I speak some Finnish and I will have obtained a master’s degree in the country. Therefore, those two aspects are in my favor for finding a job. However, I do not think I will stay in Finland for long. My boyfriend and I love Finland, but are not the settling type. So I believe upon his completion of studies, we will move elsewhere that is neither home country and create our first headquarters.