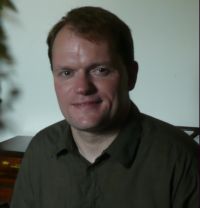 I’m a musician and writer from Britain with a background in 18th Century music, trumpet performance and creative writing. My folks instilled a love of traveling and before even starting university I had been all over Europe, visited Florida and crossed the date line to explore the Pacific. After finishing my Oxford degree and spending a year in London for my Master’s, I decided to volunteer with VSO and work in China. A two-year contract became five years in Asia, traveling and writing throughout, toward the end of which I met Jenny, my wife-to-be.

Jenny and I set up home in England in 2006, had a fantastic wedding and petitioned the USCIS for a Green Card.We both intended to start doctoral studies in the US and applied to many cities, hoping that one would have a place for us both; Boston came to the rescue. Every British kid growing up in the 1980s wanted to live in the US; all of our cultural icons were American: Schwarzenegger, Rambo, the Space Shuttle and downtown Manhattan proved an inexorable draw, although I didn’t consider emigrating until I had met Jenny. After that, the decision made itself; to be with her, I had to both come to the US and move towards making my stay here permanent.

Applying for a Green Card was not nearly as fast and stress-free as some had predicted. In the end, Jenny had to wait on her own for a year while USCIS minutely examined the ream of documents I needed to send, including police reports from China confirming that I had not been arrested there! The delay was hard for us both; no timescale information was provided and the system was as impenetrable as it was frustrating. Powerless, I had to wait in England, taking a series of temporary jobs and counting the days.

Even after arriving, I had hassle every time I traveled; this was the main reason for electing to take US citizenship last year, as it now means I’ll never have to deal with the USCIS again!

My wife is a genius and immediately found the perfect apartment. It’s toward the top end of our price range but within easy reach of BU and public transport. We live in a semi-basement, not the most desirable of configurations, so for our area we’ve been paying way below the typical rent; families upstairs from us are paying twice as much! It’s the ideal area; the shops are within walking distance (three cheers for Trader Joe’s!), two MBTA subway lines flank our street, there is a direct bus to my job and we can be at the airport in 40 minutes for $1.75. Beat that, London!

When I arrived at BU and attended the new ‘international students’ meeting, I immediately picked out the distinctive accents of two other British musicians who were pursuing Masters’ Degrees. Boston’s enormous student population has one of the highest proportions of foreign students in the country; many are from South Korea, China and Taiwan, but there’s someone from everywhere. Brookline, where we live, is a strongly Jewish area with migrants from Russia, both old and new. In China, I gravitated towards westerners, Brits in particular, but in Boston that need to herd with my fellow Britons isn’t so strong; perhaps there’s enough that’s familiar here without the necessity of harking back to ‘Old Blighty’.

I’ve found Americans to be generally warm, friendly and very curious about Britain, the ‘Old Country’ for which they still retain a great fondness. I was endlessly questioned about the Royal wedding and the arrival of baby George, sometimes as if I it were assumed I had connections to the aristocracy! The biggest cultural difference, at least for me, has been the ‘can-do’ attitude; Britain disappointed me greatly during the 2000s, failing to make its mark on the world stage through what I saw as a lack of ambition and confidence, two things Americans possess in abundance. Many Americans have also found it necessary to apologize for past administrations’ misdeeds, and none that I’ve met carry a grudge from 1776 or 1812. The icing on the cake has been that my accent – an unreconstructed Received Pronunciation straight from the BBC radio news – is always a real hit.

We have pretty much all that we need. Public transport is good enough, and both shops and employment are so close that we don’t need a car; we can easily rent a Zip car for weekends away, weddings and the like. The area is quiet and virtually crime-free. Should we decide to have children, the local schools are well regarded and there’s no shortage of cultural and sporting events in Boston. The spring and summer are gorgeous, as is the early fall (I’ve stopped calling it autumn!) when the leaves famously change; the colors in our local parks are stunning this week (early October).

I really wouldn’t change my lifestyle, but having become a citizen now I feel a certain responsibility for, and certainly a more personal connection with the shameful, bizarre goings-on in Washington. I voted in 2012 and may never vote again, given how disappointing congressional performance has been. It gives me a way to sympathize with my neighbors and friends, all of whom feel subject to the stalemate and stupidity of their politicians. As far as Boston is concerned, my only complaint would be the winters, which are absolutely bitter, with high winds, feet of snow and that damp, continuous cold which goes right through to the bone. It’s the price we pay, but some February mornings, it feels like a bad deal!

Read, read, and read again the advice from others about immigration, especially if you’re applying through marriage to a US person, or if your case might be complicated by past divorces, crimes, deportations and such. Don’t shirk from hiring a lawyer; we didn’t, and I wish we had. I’d advise getting married in the US, keeping abundant paperwork on your background as a couple and the application process itself, keeping dates constantly in mind and assuring each other, from the outset, that this will be a battle fought together. If you plan to both marry and study, get the Green Card before commencing your course, as you’d be unable to borrow without it. Finally, keep in touch with your friends as well as you can, and encourage them to visit; you may see them so infrequently that they begin to forget who you are!

I’m teaching English now, a return to my previous career before I was more active as a musician, and in the future I’d like to combine both of these with writing and editing through freelance websites. I’ve written several works of science fiction and more are on the way; I’d love to make writing my full-time job. Jenny graduates next year and we’ll be moving on from Boston; the ‘where’ depends entirely on the availability of teaching and excavation work in Maya archaeology, so we may have to be very open minded about where we end up. It’s going to be an exciting year of change and opportunities, and I feel confident in our ability to stick together, get ahead and be happy, wherever we are.