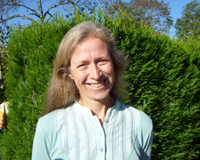 I’m Katrien David and was born and raised in Belgium. As most of the Belgians, I walked through the educational system from kindergarden through University. After obtaining a degree in Bio-engineering in Belgium, I decided to go for another MSc degree in Food Science at the University of Minnesota (USA). Even though I was more attracted by science in general, I’ve always liked speaking foreign languages (mainly French and English) allowing me to talk to people from all over the world and share experiences of life.

Beginning 2000, after my first professional experiences back in Belgium, something inside of me was longing again for another experience abroad.As I am a mountain and nature lover, I started to wonder if it would be possible to go live in or close to the mountains, while making a living with a “regular job”. As the hazards in life sometimes answer our prayers, I found a Belgian pharmaceutical company that just started a production facility in Switzerland and was looking for someone to operate in technology transfer. The ideal person for them would be trained in Belgium for 6 months and move to Switzerland afterwards (on a Swiss contract, not an expat position). As I was still living in Belgium, willing to move to Switzerland, I was the ideal person for them and they were the ideal company for me. That’s when I started working for UCB in 2001 and moved to Switzerland to the area of Gruyère (French speaking part) in 2002.

The challenge of moving to Switzerland is mainly that you are still in Europe, but you move out of the European Community. This means quite a bit of paper work and the need for a work permit that allows you to live and work in Switzerland. On top of that, Switzerland is a federal state composed of 26 cantons with each their own tax system, school system, etc… so it’s like 26 different countries in one. The work or residence permit you receive is valid only for the canton you move to. The day you move from one canton to another within Switzerland, you need to exchange you permit (mainly buy a new one) and change license plates on your car. For the move into Switzerland, you need to have all the papers ready for your furniture to be declared at the custom’s and the proof that you have a place to stay, a job, etc…

Most people who move to Switzerland after they were hired there by a company, receive help to find a living from some expat service assigned by the company. As I was the one who wanted to move, I didn’t have that help. So, during a first visit, I entered the first retail agency I found and asked for a list with all available apartments they had for rent. In the tourist office I got a detailed map of the area. I selected a couple of apartments from the list and drove around looking what the places actually looked like. After one day, I had a better idea about what side of the city, or what area I wanted to live in. From then on, I continued my search on Internet specifically in those areas or villages. For a second visit, I had a couple of appointments ready to visit apartments within my budget. I finally ended up in a beautiful village within the pre-Alps, surrounded by the mountains and at about 12 km from work. It was what they call in French a “coup de Coeur”. For 7 years I lived there, telling myself every day “No, I am not on vacation, I actually live here” and every day I felt blessed.

20% of the people living in Switzerland are not Swiss, so it is normally not that difficult to find other expats around. In my company, there were people working from 17 different nationalities, so it was easy to get in touch with other expats. It was nice to share experiences and to discover the country together. Even though the canton of Fribourg was still in economic expansion, the percentage of foreign people arriving in the area increased tremendously during the first decade of the century.

The Swiss don’t have the reputation to be very open and welcoming. In the beginning it was hard to find real friends. People were friendly and helpful, but it is very clear that you are not one of them. I had the best contacts with people who had some experience in living abroad. Most of the locals stay with the locals and they stick to the people they’ve known since childhood. Even Swiss people moving in from a different valley experience the same problem.

The best way to build up a network is through work (colleagues) or by joining a group of people who share the same interest. I registered for a massage course and found real friends there. You might also join a sportsclub, skiclub or follow a personal development course. However, once you have a Swiss as a friend, you have a friend for life! Out of sight, out of mind is not what I experienced with the real friends I have there. I also discovered that what might appear like a distant attitude, is also a form of respect of privacy. It might seem like they don’t care about you, but they will not judge you either.

Nobody puts his nose in your business, no heads turn if you are dressed in a certain way and rumors are rather rare.

As I mentioned before, I’m a nature lover and I love the mountains. Being able to live in a beautiful area, surrounded by mountains, was a dream come true. I love skiing, but in Belgium it was a one-week-a-year activity that was prepared long in advance. In Switzerland it became a weekend activity during winters. Surprisingly I adapted to the Swiss habit of becoming picky on weather conditions, so I waited for sunny and perfect snow conditions in order to go glide the slopes.

In the summer, it was possible to go walk in nature after a busy working day, relaxing with the sound of the wind in the trees and the water of a cascade… I also grabbed the occasion to obtain my pilot license in paragliding. For those interested in soft medicine, there are plenty of courses offered on all levels from massage to essential oils or naturopathy. It is true that the living standard in Switzerland is higher. Even though the cost of living is significantly higher, the salaries match the need.

Life was pretty easy en straightforward the time I was single, but at a certain point in time, I had children and that complicated life quite a bit. Unfortunately, the Swiss system is still pretty conservative and based on a philosophy where the man goes to work and the woman raises the children, staying home or working part-time. Little women in Switzerland work 100% after they become a mother and a lot of Swiss women longing for a career choose not to have children at all.

There are day-care centers, but it is hard to obtain a place in a subsidized one and the private day cares are very expensive. There are also possibilities for a “day mam” or a woman keeping children at home, but as an expat with no family around to take care of the kids when she is ill or on vacation, an official day care with a guarantee of 240 days a year, was more appropriate. However, as I had changed jobs by that time, we moved to the canton of Neuchatel in the Swiss Jura during my first pregnancy. Therefore I only started to look for a day care during the 4th month of the pregnancy. Everywhere I got the answer that the waiting lists were extremely long.

I was lucky to find a place in a (private) day care close to work and for the second child there was an opportunity there as well. But paying 3400 Swiss francs (equivalent of 2500 Euros) a month to keep 2 children (also for the days the kids were on vacation), really made us wonder what we were working for and if that was the life we wanted to continue. Moreover, children start school only at the age of 4, and only 2 to 3 hours a day… so you need to find another day care for them by that time.

At work, I started to receive reproaches for having 2 children and my (female) boss started to make remarks like “you don’t deserve the manager title anymore, now that you have 2 little children”… All this together made us decide that it was time to close the chapter in Switzerland and move back into the European Community.

If you love nature, you’re willing to work hard (official working week in Switzerland is still 42.5 hrs), Switzerland might be the right place for you. Don’t expect people to welcome you with open arms, but if you respect them, they will give you respect in return. Try to connect with those who have similar interests.

Don’t stress out. Administration is relatively efficient in Switzerland and a lot is still based on trust. A word is a word and if you are told that your permit will be sent, you may count on it. Even if you haven’t paid yet. Be on time if you have an appointment and give a sign if you think you will arrive late or at least apologize… 5 minutes late is late!

As health insurance is a private matter in Switzerland, it might be interesting to compare prices and services before you sign a contract with a company. Try to estimate the risk you can take, it might make a big difference in the monthly fee you pay.

An interesting and funny piece of literature to learn about the country and its culture is: “The Xenophobe’s guide to the Swiss.”

In 2012 we decided to move out of the country as a family and to change life completely. Our oldest child was almost 3 and could start school in France right away (in Switzerland that would have been 2 years later!). I bought a house in the French Auvergne where I run a bed & breakfast now, far away from any industry. There are still some hills around, but by moments I miss the mountains. It is nice not to have to worry about child care anymore and to be able to be with the children when they return from school and during their vacation, because they grow up fast enough. It’s was a choice and one I don’t regret… but one day, when the children are big enough to understand, we’ll visit again to show them the beauty of the country where they were born.