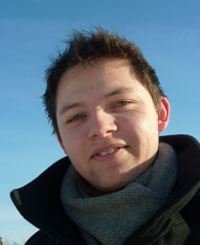 My name is Tom and I am a 25 year old Dutchman. I have studied international business and it is through these studies that I eventually ended up in Finland, where I still reside to date.

I enjoy participating in and watching a variety of sports, from with football in particular. I also like outdoors activities such as fishing, hiking and the Finnish traditions of collecting mushrooms and wild berries.

I moved to Helsinki in the autumn of 2008 for what was supposed to be a 10 month stay as part of a student exchange program.Now, 5 years later, I still find myself living here and I have even started to call the country home.

To be honest I did not known a lot about Finland prior to deciding to move here. To a certain degree this was also part of the appeal. The things I did know about the country, that it is very clean and organized and has one of the best education systems on the planet, certainly made me want to find out more.

Moving to Finland was surprisingly easy, something which holds especially true for EU citizens as I understand. Of course there is the usual paperwork to fill out, but all official authorities were able to provide their services in English and they have also made the required information available online.

Daily choirs such as grocery shopping and just getting around proved to be somewhat of a challenge for the first few weeks, mainly because I struggled with the Finnish language. Luckily most signs have a Swedish translation as well, which makes life a little easier since the words show strong familiarity with their German and English counterparts.

When I initially moved to Finland the university provided housing. However, when I decided to prolong my stay I had to start looking for something more long-term.

As with most things in Finland, the best way of finding what you are looking for is by consulting local friends. While this led to some potential apartments, my girlfriend and I eventually ended up finding a place by visiting local realtors.

During our search the one thing we noticed is that the housing market in Helsinki is very competitive, with above average prices as a result. There are many Finns who are also looking to move to Helsinki since this is where all the employment opportunities lie, as well as the majority of the universities.

Helsinki as a whole probably holds the highest number of expats in Finland, but I personally know hardly any in the area that I live in. That said, it is not very difficult to meet expats in the city and people can frequently be heard speaking English. Because Finns keep to themselves you will be quick to spot the foreigner who is politely greeting people or pardoning himself when asking to get past, this holds especially true in public places like gyms or bars.

Lately I have also noticed that a lot more multicultural events are being organized. At the last pop up restaurant day the stands ranged from Mexican tortilla stands to a Syrian salad bar and even a Dutch waffle house.

Finns are well known for keeping to themselves. Neighbors greet each other, but overall there is very little interaction. This is not just something between foreigners and locals, but also among each other you rarely hear any chatting other than people who are on the phone. I cannot remember when I last made small talk here with a random stranger.

However, once you get to know some Finns, most likely either through hobbies or work, they will have no problem opening up. In fact, I would consider some of my closest friends to be some of the locals I have met over the years.

Even though the city center is just a few bus stops away, there is just so much nature around as well. This means that the surroundings are perfect for a good cycling trip or a long hike, while at the same time all modern facilities are just a stone’s throw away.

Public transportation is also very organized and affordable. You can get to pretty much anywhere in the capital area either by train, tram, bus or metro. In many cases the public transport may actually be quicker than a trip by car.

Finns are, in general, not very welcoming to strangers. This makes it a little more difficult to befriend people and also means there is not much chit-chat. While I am sure that it also has something to do with Helsinki being the capital, but people can come across as distant and anti-social at times, especially during the cold winter months when everyone is in a hurry.

And while long winters are something you sign up for when moving to the Nordics, it is hard not to get affected by the dark days, combined with low temperatures, cutting winds and an icy sidewalk.

I would advise anyone who wants to move here to take some basic Finnish lessons as soon as possible. Pretty much everyone in Helsinki speaks English, but Finnish is unlike any other language so even basic signs can be tough to read at first. Finns also highly appreciate it
when foreigners try to make an effort and try to speak their language.

Finland is also a fairly expensive country, so make sure you have built up some savings prior to moving and anticipate on higher monthly expenses, especially if you plan on working here but have not found a job yet.

Although nothing in life is certain, I could definitely see myself staying in Finland for the foreseeable future, albeit perhaps a bit further north. Everything here is very neat and organized.

Yes, it is a little more expensive here and the taxes are quite high, but in return you get a fantastic social system in which nobody is left behind. This creates a particularly appealing environment for those who are seeking for a country to settle down and start a family.