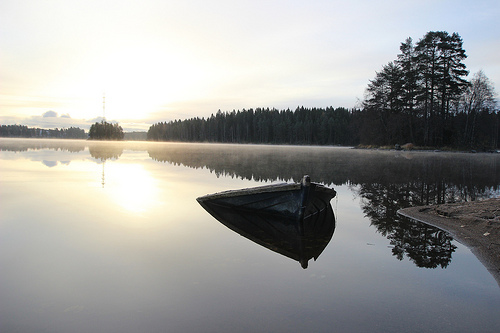 When it comes to getting used to a new culture, humor is one of the trickiest things to figure out. You can explain customs and beliefs, but humor is hard to explain.

Finland is a Nordic country in the north of Europe, with Sweden, Russia, Norway, and Estonia (beyond the Gulf of Finland) to its west, east, north, and south respectively. Although the country is often called ‘Scandinavian’, even by some tourist guide books, it actually isn’t – Sweden, Norway, and Denmark are the only Scandinavian countries.The larger group, which includes the Scandinavian countries as well as Finland and Iceland, is called ‘Nordic’. Of course, there’s a bit of fluidity and disagreement over these terms, at least in colloquial use. There’s also the fact that Finland was part of Sweden for several hundred years, and Swedish is still quite widely spoken there today (it’s even one of the official languages). Naturally, there’s also a considerable amount of cultural similarity between the two countries.

On the other hand, there are also plenty of cultural differences – in many ways, Finland differs from the other Nordic countries. Finland also has similarities to Greenland, some amount of Russian influence, and has been described as ‘Arctic’ rather than Nordic. So what does this mean for the expat? Perhaps that Finland is rather unique, and no matter where in the world you have lived before, there’ll be plenty to discover and plenty to get used to. The Finnish sense of humor is one of these things.

There’s a lot that’s been said about Finnish seriousness, their slowness to make make friends, and their comfort with silence. However, this does not of course mean that the Finns don’t laugh. The Finns love a good joke just as much as anyone else in the world, but their humor is usually dry and subtle, with plenty of sarcasm. For many expats, this can be rather confusing – you take a Finn’s statement literally and at face value, and only start to wonder if it was a joke several minutes later. However, this kind of humor isn’t unique to the Finns, so it’s not too hard to get once you know to expect it.

We asked Louis Zezeran from Comedy Finland to tell us more about the Finnish sense of humour.

“Finnish humor is pretty dark, very sarcastic. Finns have almost a national lack of self confidence, they are a country of smart engineers, not flashy managers. So jokes about themselves and their place in the world go down great. Having said that, there is a pride growing, especially with the rise of the right in Finland, where many good people are mobilising to say “finland is good, immigrants are good and we dont want to be a racist backward nation”, it’s really lovely to see.”

There’s often a lot of wordplay and punning in Finnish humor, and this can be particularly difficult for expats. In any language, it takes a high level of fluency to appreciate jokes that rely on wordplay. Even if you speak Finnish, it’s quite likely that most jokes of this kind will go over your head. It’s easy to miss a joke when you’re translating into your native language while someone is speaking. But don’t worry, with time and practice, your fluency will improve and you might even manage some Finnish wordplay yourself.

There is also some Finnish humor that relies on confusion and misunderstanding for the punchline, and this is probably the most difficult for outsiders to appreciate. Unless you have Finnish relatives and have heard such humor before, this is something that might take you a long time to get.

Topics to joke about and topics to avoid

The other thing worth mentioning is the topics that Finns like to laugh about and the ones that are best avoided. Here again, the Finnish reticence might lead you to believe that their humor is extremely proper, with a great number of taboos. However, the Finns are actually quite comfortable laughing about most things.

Due to Finland’s history with Sweden, jokes about the Swedes are especially popular, and will always go down well, no matter how silly the joke. At the same time, the Finns are quite capable of laughing at themselves too. However, it’s advisable to not get too personal, unless you know the person really well.

Louis adds a few more tips for people who are planning to move to Finland:

“Expectations are most important when moving to Finland I think. Finland is quite an international place but still has many of its own quirks. Maybe spend some time in Finland first, just to get an idea for what it’s like. Finland can be frustrating for some foreigners who are not used to the socialistic system, government does have a say in many aspects of your life. Finns are also not big on self boasting. In America you are encouraged to publicly celebrate your life achievements, in Finland, don’t flash whatever money you have around, keep it humble and simple (maybe good advice for life at anytime). None of these things I have listed are bad, but if you know what to expect I think dealing with them will be much easier.”