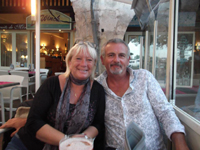 I moved to France in 2005. I had always wanted to move to France, I wanted to move home anyway, that’s how the dream became reality. We put our house in the UK on the market and after selling we came on an extended holiday to Brittany, the plan was to look round, if we found some where great but we could always return to the UK and buy there if we didn’t.

At first our eldest stayed in the UK, I admit I cried on the ferry, but our youngest who was with us reminded us we hadn’t committed to anything, didn’t stop the tears though, my parents weren’t in good health and also admit to feeling guilty, but do you put your own life on hold in these situations?I wasn’t sure at the time if I was doing the right thing, but now I’m sure I did. We gave ourselves 8 months to find somewhere and was tempted to go further south, but although I had closed my business my husband kept his going, he knew he could commute if he was close enough to an airport with links to the UK, so was happy to look around and south of Rennes. Remembering what house prices were like on our last holiday to France we was shocked to see how prices had risen, and houses we had looked at on the internet that were available when we were in the UK became sold sometime between us getting on and getting off the ferry. The house we settled on wasn’t our ideal but ticked enough boxes, we all had to agree on a property if one said no we walked away. I was sold on my home on the south facing view across the valley.

There’s quite a few expats locally as we live not far from La Gacilly, indeed when we moved here there was 2 English owned houses we could see from ours on the other side of the valley, but we wasn’t bothered about searching out other expats. We get on with our life and make friends along the way regardless of nationality. Our relationship with the locals is very good; we go to theirs and they come to ours so it’s not really any different from being in the UK. Although people do tend to hibernate during the winter, wake up for Xmas and new year, then gone again.

We like everything about life where we are, we have enough land but to much, 2500sqm and we have nice neighbours. If I have one complaint it’s not seeing gritters on the road anywhere near us so winters with the ice and snow on to what the farmers leave on the road can make for hairy driving. Oh yes, living near a farm, bloody flies!!!! I dislike the way services are run, the way your billed, and food prices until you learn can be very expensive, but then you remember the size of your garden and start growing a lot of your veg and keeping your own poultry.

One of the biggest differences to me living in France to the UK was the lack of any feeling of being threatened. A group of youngsters together will wish you a good morning/afternoon, but as in the UK, there are drunks on the streets in major cities.

The French can be terrible drivers although they are less likely to get road rage.

Shopping can be a lot more expensive, but then that’s what the internet is for. Plenty of outlets throughout the world post to France, so I only buy clothes in France during the sales.

The young French eat too much rubbish, they either want to be American or English, but the older French still know to eat. They find some English foods strange; that’s funny coming from someone who eats pig’s bums and tripe.

The only advice I can give to others and I don’t want to be negative, but, if you haven’t got a rock solid relationship it will fail. France is littered with separated women with kids and no money, ’cause when the going got tough the man got going. He’s now back in the UK and the woman is struggling. To many oldies maybe young retired come to France, buy a rural property, have no French language skills, possibly he is the only driver and often not entitled to any French health care.

What if one of you is taken ill, maybe hospital, and inevitably we all die. Imagine a English speaking female OAP, who cant speak French and can’t drive living out in the sticks in a house without central heating, I hear you say, no one would do that, but they do.

Many dreams fail when the Expat becomes a grand parent of a child in the UK, they sell up to “be closer to the grandkids”, In the future I would like to win the lottery, but until then, my husband will continue to go to work at 3.30 am and I will continue to look after the house and my animals and try to build my website, I’m fortunate to have my sons, my french daughters-in-laws and my two grandchildren near by. My sons have been a credit to me, lovely lads who work hard, have bought their own house, bigger and better than I could afford in the UK and now, 4 bed detached houses on new estates, garages and good sized gardens. I doubt that they could have afforded the same in the UK, no way they would have earned so much and gotten their mortgages. Would I return to the UK, no, everything important to me, except maybe my sister, is here in France with me.

Rosie lives in Brittany, France and shares recipes, videos and more through her popular blog Rosie's Home Kitchen. You can also catch up with Rosie on Facebook and Twitter.