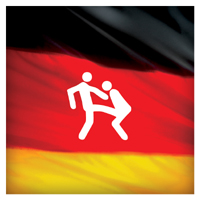 I am an American expat from Portland, Oregon, now living in Hannover, Germany. I am a freelance graphic designer and copywriter, and an avid blogger of all things humorous (though I most often take aim at subjects like Germany, expat life, culture shock and my beautiful – and unintentionally hilarious – German wife.)

My wife and I lived together in Portland before we moved to Germany, and in that last year, we were both working full-time jobs, planning our destination wedding, arranging for my wife’s future career in Hannover, and worrying about how I was going to continue my own career in Germany without speaking the language. It was probably the most stressful year of our lives thus far, and we dealt with it by eating cake, pizza and drinking copious amounts of beer. (My wife looked amazing in our wedding pictures. I looked like a bloated veal calf.)

Our location was determined by my wife’s job; she’s a Gymnasium teacher (and a fantastic one at that), and she landed a job at a school in Hannover. Finding an apartment in any German city can be stressful, and we were prepared to hire a broker if necessary. Luckily, we knew a friend of a friend in Hannover, so we were able to figure out the kind of neighborhood we wanted and what we could afford. But finding an apartment is rarely a pleasant experience, and no matter the country, moving sucks.

Yes, there are actually quite a few expats in Hannover. There is even an expat group called Hannover4EnglishSpeakers, which meets up a few times each month for drinks, sporting activities and to watch movies in English. (I think they even have a group for expat parents, so their little English-speaking trolls can roll around in the mud together and give each other the flu.) There are expat groups like this in every major city in Germany, and they can be very useful for things like making friends, getting recommendations for doctors and dentists, buying and selling furniture, and complaining about how the German language uses gender-based articles, making every noun either a ‘he,’ ‘she’ or an ‘it.’ (And all added together, between the 4 cases, Germans use a total of 16 definite articles. Sixteen.)

I work at home in front of the computer all day, which makes me both a geek and a shut-in. And like the rest of my pale-skinned brethren, I only leave my coffin when the bloodlust takes me and I am forced to venture out into the night to feed. Just kidding. We have a lot of friends, and I’m also taking a German language class, so we mingle with the locals quite a bit. (Though never with drunken soccer fans. Those guys are scary.)

Germany feels safe. I like the pace of life here. And Hannover is similar to Portland in that it feels like a big, little city. Or a little, big city. However you say that. Also, as an expat, you’re always challenged. The people, the culture, the godforsaken and unnecessarily difficult language – everything is new. You’re like a perpetual student, so there’s no time for boredom or plateau. You gotta get up every day and launch yourself into that alien landscape like an astronaut about to pee in his space suit.

Having two families on either side of the globe. You’re always bouncing between them for the holidays, and one side always misses you while the other gets to bask in the radiant splendor of your company.

Customer service. In America, strangers are sickeningly sweet to you, especially in places of business or over the phone. Sure, the person being nice to your face might actually loathe you right down to your very soul, but at least they ensure a smooth, professional transaction. Not in Germany. Oh no, here, customer service falls into two main categories: standoffish and downright abusive. Naturally there are exceptions to this rule, but even my wife agrees, saying "Americans are like peaches and Germans are like coconuts." Americans are sweet on the outside but hard on the inside, and Germans are hard on the outside but sweet on the inside.” (While I try not to take offense at the notion of having a foreign object at my center that is stone-like and unfeeling, I think she makes a fine point.)

Traditional German food is heavy, fatty and served with beer. I love it! I am gleefully eating and drinking my way toward my first heart attack.

I plan to ace my B2 level German language exam, which will certify me to work as a graphic designer for a German agency. I will then leave my home office and rejoin the lemmings on their great but inevitable plunge into the quagmire of despair that is working life. I jest, but I will miss making a living in my underwear. (Wait, that made me sound like a stripper, didn’t it.)

Learn the language of the county in which you plan to live. I feel so passionate about this, I must repeat myself:

For the love of all that is holy. For the love of God and Jesus H. Christ on rice, learn the language of the foreign country in which you plan to live. Every single word you learn, written or spoken, will make your life easier. Be glad you are starting now, rather than later. Feel angry you weren’t born a native speaker, but be grateful you can learn to become fluent. Learn as much of the language as you can before you get there. Keep on learning while you’re there. If you return to your home country, keep on learning it anyway. Throw yourself into that language like a fat kid at the deep end of the pool.

I took classes, bought books and software programs, practiced with my wife and taught myself as much German as I possibly could before I moved here. This added up to exactly 1.5 years of language training, and I still depended upon my wife to translate any interaction more complex than, “Would you like another beer, Sir?” Answer: “HELL yes.”

If I could download the entire German language into my brain like in The Matrix, but it would cost my entire life’s savings, I would do it. I would do it right now. If I had to pay my entire life savings and then kick a puppy too, I would hand over the cash and punt that little doggie like a football.

'Oh God, My Wife Is German' shares more stories about expat life through his popular blog www.ohgodmywifeisgerman.com, Facebook and Twitter.