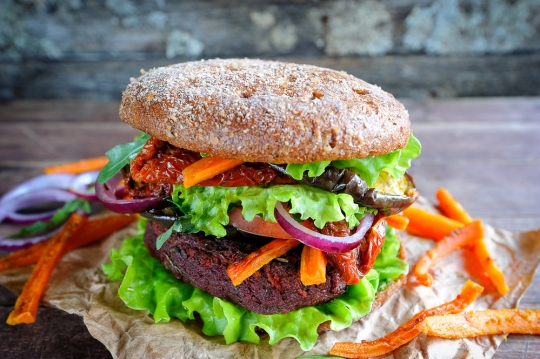 Paris has changed. The city looks much the same as it has for the past 100 years, but the French capital is experiencing somewhat of a renaissance when it comes to the humble vegetable. What once was a destination recognised for being one of the most difficult places in the world to be vegetarian or vegan now boasts a booming veggie scene.In the past, vegetarians or vegans living in Paris would be relegated to side salads and pommes frites at a French café, or falafel from the historic Jewish quarter in the Marais. Now you can treat yourself to lunch at an entirely meat-free brasserie followed by an elaborate cake purchased at the vegan patisserie. French cuisine is well-known for its traditional pastries and creamy, sauce-laden meat dishes, but there is change in the air.

Parisian cooks, led by famed Michelin-starred chefs Alain Passard and Alain Ducasse are embracing plant-based cooking. Passard threw meat off his restaurant’s menu in the early 2000s (although small amounts of meat have later made their way back onto the menu), and Ducasse revealed a similarly meat-free menu several years ago.

If you’ve recently relocated to Paris, here’s where you can find vegetarian and vegan food.

If you’re after a Michelin experience, then Alain Passard’s three Michelin star L’Arpège and Alain Ducasse’s three Michelin star Plaza Athénée are your top choices. Neither restaurant is 100 percent vegetarian, but both are vegetable-focused and offer vegetarian and vegan tasting menus. Be sure to request the vegetarian/vegan menu in advance. Both restaurants must be booked well ahead of your visit.

Looking for French food, albeit sans bœuf? There are now a number of completely vegetarian French restaurants in Paris.

Brasserie 2ème ART
https://www.facebook.com/brasserie2emeartparis/
If you’re looking for a brasserie, but are frustrated that many of the more traditional establishments still haven’t expanded their vegetarian and vegan options, then you need to go to Brasserie 2ème ART. This vegan spot serves a range of international and local dishes, from leeks in vinaigrette to pad Thai.

VG Patisserie
https://www.vgpatisserie.fr
Those with a sweet tooth aren’t left out at this all-vegan patisserie (which also has gluten-free options). Try vegan versions of French favourites such as macarons, croissants and pain au chocolat. At breakfast time, you can get an espresso and croissant to go for just €3.20. VG Patisserie also offers more fantastical creations such as the ‘white pompom’ cake, a rich white chocolate and coconut mousse cake with passionfruit cream filling.

At the other end of the spectrum from haute cuisine, Paris has a surprising number of vegetarian burger places. Choose from Hank Burgers, East Side Burgers and VG.

Paris is a cosmopolitan city represented by a multitude of different international cuisines. The city now offers an ever-increasing number of vegetarian and vegan international restaurants.

Apulia
http://www.apulia.fr
This vegetarian restaurant is a family-run eatery specialising in food from the Puglia region of Italy. Expect to taste Puglian dishes such as orecchiette pasta with broccoli, chickpea and rosemary pasta or chocolate cake made with olive oil.

Vietnam in Paris
https://www.facebook.com/vip.saveursduvietnam/
This Vietnamese restaurant is vegan and serves pho, tofu curry and pad Viet, among a selection of other plant-based Vietnamese specialties.

Krishna Bhavan
http://www.krishna-bhavan.com
This vegetarian Indian restaurant has several locations in Paris. Vegans should inform their server of their dietary preferences when ordering. Expect a range of curries, dosa and other delightful Indian dishes.

Paris is increasingly home to vegetarian supermarkets and specialty shops, so you won’t have trouble stocking your kitchen. Of course, you can visit one of the many food markets for vegetables and fruits, but if you require more specialty ingredients, you can go to your local health food shop or a vegetarian/vegan supermarket.

There are many chains of health food stores in Paris, such as Biocoop, La Vie Claire, Bio C Bon and Naturalia, and your neighbourhood likely has one of these shops.

For more specialty ingredients, Un Monde Vegan, Mon Epicerie Paris and Naturalia Vegan (which has several locations) are 100 percent vegan supermarkets. They stock a wider range of plant-based meats, cheeses and other ingredients than most supermarkets and health food shops.

Jay & Joy sells the artisan vegan cheese which is made in store. If you’re in need of chocolates (and who isn’t?), Ara Chocolat is a highly-rated, all-vegan chocolate shop.

Non-leather shoes and bags and vegan cosmetics can be purchased at vegan shops such as Lamazuna (cosmetics), Veganie (cosmetics) and Manifeste011 (fashion).

With an array of vegetarian and vegan restaurants, shops and more, Paris is a veritable veggie heaven these days. No matter where you’re from, you’ll likely find that Paris is on par with your hometown when it comes to vegetarian dining. Utilising the array of health food shops, food markets overflowing with seasonal vegetables and specialty vegan supermarkets, you’ll be able to use your own kitchen to create whatever plant-based foods you desire. Whether you’re after haute cuisine at a Michelin-starred restaurant, a culinary tour of the world or a forkful of French pastry, these days you’ll find a veggie version of it in Paris. Bon Appétit!

Have you lived in Paris? Share your experiences in the comments below, or answer the questions here to be featured in an interview!