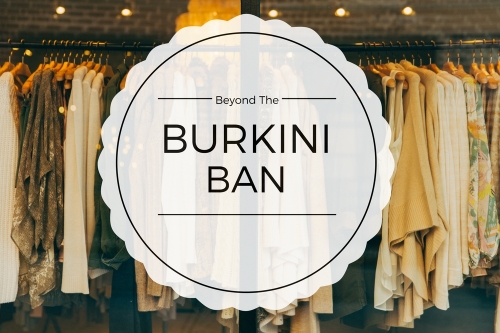 Paris is often referred to as the Fashion Capital of the World. This is one of the reasons why people from all around the world dream of living in France. Moreover, the French are known to be extremely open-minded when it comes to dress codes, especially the women. This is evident in the fact that the country is home to some of the most prominent topless and nude seaside resorts in the world.As a matter of fact, the men and women don’t always bother to cover up even when they visit a regular beach. However, all beaches have different rules about going topless or nude, and it is essential for people to find out what is acceptable before they go bathing in the buff. In fact, some of the regulations may come as a bit of a surprise to you. For example, did you know that being “overdressed” on a beach in this country could actually get you into a spot of trouble?

France was in the news recently after a controversial summer when some of the mayors tried to impose a ban on the conservative swimwear that is worn by some Muslim women. The burkini became taboo in several parts of the country after it was interpreted as a symbol of religiosity, which could be against France’s secular code.

French officials claim that this piece of clothing is not in line with the country’s secular views. More than two thirds of the citizens (67%) also support the ban since they believe that the burkini is a sign of oppression and enslavement of women. Around 15 towns along the Riviera, including Cannes and Nice, went ahead with the implementation of the ban; women were not allowed to wear the burkini at a public beach or in the sea. In fact, women wearing a tunic, leggings and a headscarf on the beach were asked to shed layers by the police. Anyone on the oceanfront who did not follow this rule or covered up excessively could be fined up to € 38 (US $ 42.62, £ 33.16) for “not wearing an outfit that respects good morals and secularism”.

However, Muslim women around the world strongly opposed the ban, stating that the burkini enables them to keep their modesty intact, follow their faith and at the same time, participate in regular activities like swimming in a public place. They believe that they can be integrated into Western culture using this garment, instead of excluding themselves from it.

The original inventor of the burkini, Aheda Zanetti, a Lebanese-born Australian Fashion Designer, claims that several non-Muslim women also choose to wear the swimsuit she designed for reasons that have nothing to do with religion. Her clientele comprises British chef Nigella Lawson among other women, including lifeguards, skin cancer survivors and those who are highly conscious about their body image.

After a lot of anger from Muslims around the world and a global protest, on August 26, 2016, France’s top administrative court overturned the ban that had been imposed on the swimsuit. While the authorities maintain that they are highly concerned about radicalization, they also believe that burkinis are not causing the problem.

Supporters of the ban are unhappy with this decision and those in power are still trying their best to get it implemented. Unfortunately, this is not the first time that an Islamic piece of clothing has been frowned upon in this country. Headscarves have also been prohibited in public schools in France.

Not Just The Burkini

In 2004, a ban under the French law on secularity and conspicuous religious symbols in schools affected the donning of veils, turbans, headscarves and other similar distinctive items of clothing. This law was challenged by some in the European Court of Human Rights but was upheld on July 1, 2014.

After that, on September 14, 2010, the Law of 2010-1192, the Act prohibiting concealment of the face in a public space was passed by the French Senate as an act of the parliament. This meant that men and women would no longer be allowed to wear a face-covering headgear or a niqab in any kind of public place (streets, shops, parks, museums, malls, schools, buses, trains, etc) with effect from April 11, 2011. Women traveling by private transport or praying in a religious place could be exempt from this law for that duration.

Reactions to the Bans

France is home to a huge Muslim population, the largest in Europe. It is estimated that around 5 to 6 million people in this nation – around 8% of the total population – follow Islam. Such policies are bound to make them believe that they are being targeted by the local authorities and citizens. French Muslims therefore feel discriminated against and the attitude of the country’s officials has prompted a debate. Followers of Islam claim that they are subjected to a disproportionate amount of intolerance by the locals, especially in comparison to the French Christians and Jews. Many of them go as far as saying that the people of their community have been ostracized by the locals.

Despite the ongoing debate, it might not be the case that the French authorities are trying to stigmatize Islamic people. France is one of the most secular nations worldwide. It is almost militant in its approach to the separation of the Church and the State. They strictly follow neutrality in religious affairs and imposing a ban on the burkini is arguably just their way of preserving their secularism.

It is also important to bear in mind that France is not the first country to take a stand against the burkini. There was a debate around this garment in Morocco too, which thrives on tourism. Certain hotels in Egypt have stopped women from wearing burkini-style swimwear in the pools. Some of the Egyptian restaurants and elite clubs have also imposed a ban against veils.

If you are planning to move to France it is important that you know about the different Fashion options that will be available to you. Also, with all the rules and regulations on dressing in this country, you need to educate yourself on what you can wear in public a place and which items of clothing could land you in trouble.

French women are among the classiest and most stylish worldwide, when it comes to fashion. Yet, contrary to the common belief, a majority of the female population in France dress in an understated way.

Muslim women in the country have embraced French haute couture while maintaining the values of their own customs and traditions. French Islamic women often blend right in with the rest of the female population by donning Western clothes that keep them covered from neck to toe, with only their faces and hands showing. They often dress up in articles of Western clothing such as full-length dresses and suits, or wear long skirts, trousers, jeans and leggings. These are normally paired with loose-fitting tops or tunics.

Jackets are a great way to accessorize, add variety to a wardrobe and dress modestly. You will often see Islamic women don an extra layer on their usual attire by putting on a long coat or blazer that covers their hips, knees or calves. Those who wear leggings, skinny jeans or tight-fitting skirts generally put on a loose overcoat to hide the shapes of their bodies.

Scarves are a very common accessory seen in the wardrobes of most French women; you can use this item to enhance what you are wearing, hide a low neckline or keep your head covered. While it is acceptable to wear a headscarf in certain areas of France, make sure that your face is visible at all times. Wearing a veil or keeping even a part of your face covered in public is against French law and you could get into trouble with the local authorities for doing so. Do keep in mind that not all Muslim women in France, or even other nations, keep their head covered at all times.

Stoles are another great way of using Western clothing to maintain the modest look. During the warmer climates they are a great replacement for jackets. Women put a light stole on their shoulders and head to keep their skin covered, without getting too hot.

A few international, renowned fashion houses in Europe have now realized the market potential of catering to Muslim women and have started designing clothes that don’t just make them look chic but also preserve their modesty, keeping their religious sentiments in mind. More Muslim girls and women in Europe are therefore finding it easier to buy an appropriate style of clothing.

In places such as Great Britain, some of the major brands actually have a “Ramadan” Collection, which has been designed keeping in mind the dressing preferences of their Muslim consumers. Unfortunately, in a secular country like France, purchasing items that adhere to Muslimah Fashion may be a bit more challenging. Those who can afford it travel from France to the United Kingdom just for a couple of days, to go on a shopping trip during the festive season and take advantage of the various discounts, offers and sales. They bring back bags full of clothes that last them for up to a year, after which it will be time for them to make another trip. Of course, traveling to the UK and shopping (even when there is a sale) isn’t exactly easy on the pocket.

There are a few upcoming fashion designers in France who are trying to start their own lines of clothing for Islamic women. However, they are facing challenges with the authorities as well as with French citizens and it may be a while before they achieve their objective.

The good news is that there are numerous personal fashion designers and couturiers in France that can cater to your specific needs and preferences. These professionals not only guide you on the different patterns of clothes keeping your faith in mind; they can also recommend colors, fits and fabrics that will suit you in general. Many of them may also coordinate with their tailors to get the outfits stitched and will hand over the finished product to you. However, do keep in mind that this option is quite expensive. Designers charge a lot for their time as well as their expertise and getting clothes stitched exclusively is bound to come at a high premium.

Another option is to purchase clothes that are long, loose-fitting, high-necked, and have full sleeves from regular apparel stores. Every store has a fair-sized stock of full-length dresses, ankle-length skirts, culottes and wide-leg trousers as well as long tops, t-shirts and tunics. Jackets, scarves and stoles of different varieties are also easily available in almost every clothing store.

Online shopping has definitely been a boon for men and women worldwide. A simple online search will take you to hundreds of online stores that specialize in Muslimah Fashion and deliver to any address. You can browse through thousands of options, choose the outfits that you like best and mention the size you want it in. While some sites expect you to pay beforehand, the most common online shopping portals (like Amazon and Ebay) have the Cash on Delivery (COD) option. The delivery time may vary from one site to another and could range anywhere between 24 hours and two weeks. While shopping for clothes and accessories online is usually more economical, there may be an additional shipping charge, which increases the overall price of the product. Do check for any such hidden costs before placing your order online.