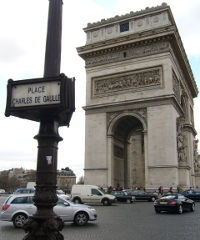 Driving in Paris can be a nerve-wracking experience for many. The Étoile, for example, is the intersection of twelve major Parisian roads, and maneuvering a vehicle through this junction alone has given many foreigners the jitters. Most holiday-goers are advised to avoid driving in Paris at all costs because of the numerous hassles one is likely to face. But for those who are in the process of making the city their home, driving may become a necessity. While Parisians may have mastered the art of navigating the bustling streets, expats could do with a few survival tips.

Renting a carIf you want to rent a vehicle, you will be able to find a car rental service at any airport or railroad station. It’s a good idea to reserve a car in advance, before you arrive in France.

If you are bringing your own vehicle into France, you need to bring along its registration and insurance documents. You will enter Paris through the Périphérique, the huge ring road that people use to come in and out of the city, which is usually quite congested. You can avail of a parking space at some hotels that charge by the hour or day. If you’re travelling during peak holiday season, you will be handed a brochure at the toll gates by the Bison Futé, which recommends routes that are less congested.

In France, vehicles drive on the right. The speed limits are 110 km/h on national highways, 130 km/h on autoroutes, 80 km/h on the Périphérique, and 50km/h in towns. The rules for yield right-of-way or priorité à droite are that a vehicle entering from the right gets priority in towns and cities. In other areas, vehicles on the major roads have priority. You are not allowed to take U-turns or cross a solid white line. Other rules include wearing of seat belts by all occupants in the vehicle, use of approved child seats for children, and wearing of helmets for drivers and passengers on scooters and motorcycles.

Traffic in Paris is mostly congested from 7:30 am to 9 am and from 5:30 pm to 7:30 pm. Over the weekend too, the streets are likely to be busy from 4 pm onwards on Fridays, and on Sunday evenings as people return home. Autoroutes such as the A5, A6, A7 and A20, which connect Paris to the south of France, are likely to be filled with traffic with vacationers during school holidays.

There are strict regulations for parking in urban areas. Parking is allowed only in the designated white spaces. You can pick up or drop someone off at the yellow curbs, but parking isn’t allowed there. If you see the sign Payant, it means that you have to pay for parking. At Horodateurs or payment machines, you can buy coupons for anywhere between 15 minutes to two hours of parking time. Those who don’t pay up are liable to pay a fine of 17 €. If by chance you park your vehicle in the wrong place, it is likely to be impounded. In such cases, you can call the Préfecture de Police, which serves Paris and some surrounding suburban areas. They will instruct you on how to get your vehicle back after paying a towing fee and a fine.

According to French law, in case of a breakdown on a toll road, drivers can’t seek assistance from their own assistance providers. They need to use the orange emergency phones, which are found at regular intervals on main roads and toll roads, to request for help from the police or the official breakdown service that operates in that specific area. Once the vehicle is moved to a safe designated area, they can receive assistance from their breakdown provider.