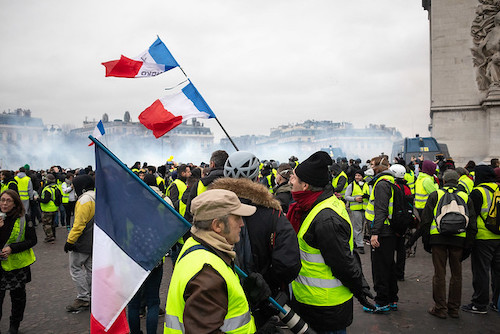 A widespread movement across France has gained global attention and been dominating the news. In fact, the protests organised and carried out by the gilets jaunes have become so colossal that the mouvement des gilets jaunes has become the longest running protest in France since the 1940s. The protests have been increasing in scale and violence since the end of last year, but they have undeniably produced tangible results from a government that had no choice but to listen to the unrest.So who exactly are the gilets jaunes and what’s behind these protests? Why did they start, what is the likely aftermath, and will these ongoing demonstrations have any effect on the expat community in France?

Who Are The Gilets Jaunes?

The gilets jaunes, or in English ‘yellow vests’, are a collection of people from predominantly working- and middle-class backgrounds. There is no hierarchy or leadership structure in the gilets jaunes, but it can be traced back to an online petition. The petition, which called out the government for high fuel taxes, accumulated more than one million signatures.

There is no typical ‘type’ or person who is involved in this movement. Despite some accusations of racism and far-right tendencies, the movement claims to be inclusive of all ethnicities, backgrounds, ages and genders. What initially started as a protest about high fuel taxes has eventually snowballed into a wider political movement, one that called for an increase to the minimum wage, a reintroduction to the solidarity wealth tax, and the resignations of President Emmanuel Macron and his government.

What Are The Effects Of The Protests?

Some of the protests spiraled into mass riots that saw high levels of violence and harsh counterattacks from the French police force, resulting in multiple injuries (both to protestors and police), with some people blinded by the non-lethal weapons ammunition used to keep protests under control. Despite these injuries and the destruction of public property, the protests have seen results. President Macron was forced to cancel the fuel taxes and implement a six-month suspension on diesel and petrol price changes. It was also announced that there would be an increase to the national minimum wage, while taxes on overtime and end-of-year bonuses were eliminated.

The French economy suffered as a result of the protests, with many business owners in Paris being affected in some shape or form. France’s retail federation claimed that the protests had cost its members up to €1bn. Shopkeepers in the centre of Paris saw their stores heavily damaged during protests and some even looted, while others noticed a nosedive in business as tourists fled the area. In fact, the Paris tourist board estimated that there had been a rise of five to six percent of international visitors cancelling flights. It was also estimated that hotels and restaurants would be losing 30 to 60 percent of their revenues during the yellow vests’ protests.

What Does This Mean For Expats?

So far, no specific effects have hit expats any differently to local people. Aside from general concerns for safety during the violent protests and the inconvenience caused by the road blockades, expats in France have reported not being directly affected. Some industries were hit harder than others; if you own a small business in France (particularly in or near Paris), then you may have noticed an impact of gilets jaunes on your trading.

Any future action will continue much in the same way, with businesses in the centre of Paris seeing the most repercussions from the continuing protests. While the movement is somewhat waning, and despite the concessions offered, it is expected that the protests will continue and that the yellow vests will push forward with calling for Macron’s resignation.