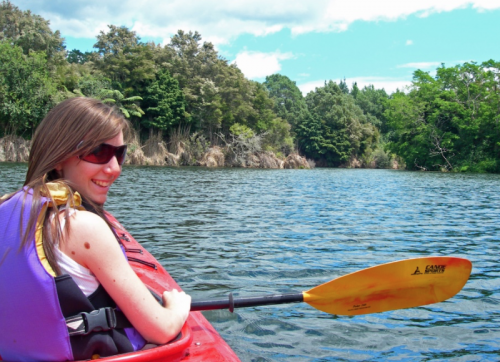 First, let me paint you a picture… of a very capable, very confident young english woman living in France, who has conquered parking in very tiny spaces, mastered most of the accepted french hand gestures, perfected her ‘moelleux chocolat’, and has an A-Level in french don’t you know!

So finding the pneumologist’s office in a french hospital should be easy, yes? Having rehearsed the line all the way there in the car all that was needed was the finest “Fleur Delacour” accent and all would be well… ‘Je cherche le noomologeeste, s’il vous plait.’ The lady at the help desk looks at me… tut… so I show her the letter with the appointment on it…. ‘Ah le Pnoomolog!!’Who knew?… The French pronounce the ‘P’!!

I had turned from a confident franglophone into a seven year old learning to read! On days like this it feels like I’m no closer to speaking french than the day I arrived 4 years ago. I tried to comfort myself in hearing french friends trying to come the other way.

My husband has a friend who is french and damn near fluent in english too (ugh!). But he still stumbles with the odd idiom…

‘That’ll do the work’

Of course the french use the same word for ‘job’ as they do for ‘work’ so you can see his mix-up. The thing is, I actually prefer his way of saying it and often find myself copying him instead of using the english version!

And I have to admit the french just seem to be better at learning english than I am at grasping french. A friend of mine claims to have very rudimentary english, but speaking with her the other day she told me about a fox who was coming into her garden and eating the apples that fell from her apple tree.

‘A sneaky vegetarian fox’ isn’t a phrase I have mastered in french yet!

It doesn’t help my confidence much when my five year old (who has been going to a french school for two years) jabbers away in the back of the car with his petits amis. How long until he figures out I can only understand 60%… ok 50% of what he is saying? At least my youngest son still levels with me. At three years old he has only been going to school for 6 weeks or so….

And I think he is making it up as he goes along!

The other day he told me he needed to go to the toilet while they were having lunch. I asked him what did he do? How did he ask the teacher? He said ‘Grrrrrundinerplay’!…. Hmm. I had to laugh, bless him. But hey it worked! He didn’t have wet pants on so someone must have figured out what he wanted.

That’s the thing with smaller children, they have an adorable innocent quality. My friends who moved here a year after me have older children… a son who is twelve and a daughter who was eight at the time. She proudly came home after a week in her new french school and told her mum that she had been singing french songs in the playground with some of the other girls. A little nervous her mum asked which song she had sung…

Lady Marmalade has some explaining to do! But no letters were sent home and she is doing very well in school. She has lots of friends and helps her mum by doing all the translating when french workmen come to the front door!

So there it is! Will I ever get over this language barrier or will I just go on as I am now? It’s not so bad I suppose. The people in our village are very friendly, they like having someone they can practise their english on. And whenever my husband and I walk into the Notaires a cry goes out…

Don’t get me wrong, I knew it was going to be a challenge when we decided to make the move and I’m so glad we did! It’s all part of the fun, the adventure, the achievement. And it’s not like I haven’t had any successes along the way… we’ve navigated the healthcare system through a pregnancy, overcome the mountain of red tape to buy a house, coordinated major renovations to that house, jumped through hoops to make an insurance claim when storms ravaged the house, and recently won planning permission to build a garage for the house (can you tell where most of our energy has been spent?)

Sure, anyone can do most of those things in their own country, in their own language…. but we did it in French!

About the author
Dani lives in rural France with her family and thinks the best part of an expat community is the mutual understanding that says we know how difficult it can be but you’ve done it and we applaud you! And it’s the challenges that make the reward even greater… but sometimes it could be just a little easier. So she co-founded setlr.com.