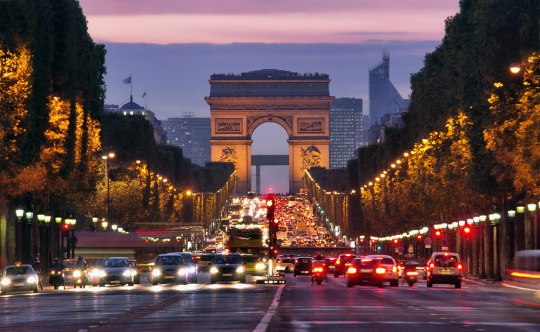 Few cities have the romantic allure of the City of Lights. The French capital has made names, broken hearts and inspired geniuses. Ernest Hemingway, Pablo Picasso and George Orwell all found their artistic feet in Paris, the city they adopted as home.Perhaps this is why more than 20 percent of the city’s population were born outside France. The city’s glittering reputation draws expats in their thousands every year.

Paris is not only the home of art and government but business and, with the Sorbonne and 16 other universities in the greater city area, of academia. It’s hardly surprising that so many expats in France settle in the capital and make it their home.

But like any grand old lady, Paris has her quirks and compulsions. The city has its unwritten rules and some strongly enforced regulations. The city’s native people have little patience for those who stumble through Metro passageways in the wrong direction or misjudge the office dress code.

It’s no coincidence that the phrase faux pas has crossed cultural boundaries, since the French hold etiquette in high regard. Paris might be a bustling, busy metropolis, but there is always time to greet the waiter and use the proper conjugation of verbs.

Part of the fun of expat life is learning the traditions and culture of your new home, and Paris will keep the game going for longer than most cities. There are rules for the office, talking to the neighbours and even for sitting in the park.

But don’t let that put you off, the city richly rewards those who take the time to get to know her and treat her right. Those who have spent any amount of time living in Paris will soon find themselves with new habits and a uniquely Parisian outlook on life.

If you find yourself doing any of the ten things listed below, you might just have been in Paris for too long.

10. You will happily sit outside in any weather

Is there anything more Parisian than sitting at a table on the pavement, sipping wine and watching the world go by? Well, yes – resolutely staying there in inclement weather.

Whether they are there to show off their chic, urban style or watch the street-side catwalk show, Parisians love to sit outside. And they will do so come rain or shine.

A big part of this may be the indoor smoking ban. In a city with an astounding number of smokers, it’s pretty common for meetups to end up accommodating the smokers in the group, even if it means everyone shivering.

9. You stay off the grass

Paris is a big, crowded city, with most people living in apartments. So it’s hardly surprising that Parisians flock to the city’s parks in droves, enjoying their ordered landscaping and carefully manicured lawns.

But don’t be fooled; the park is not a playground. Most of Paris’ parks have strict rules about what you can and can’t get away with. A hot day in London sees Brits of all shapes and sizes stripping away shirts and sipping beers on the grass whilst the sun blisters their pasty hides, often with a loyal hound by their side.

Doing this in Parisian parks could land you in serious trouble. Rules banning alcohol, dogs, nudity and grass-sitting can incur the wrath of park wardens, so make sure you get to know what’s permitted and what isn’t.

8. You can navigate through a crowd

Paris is packed with people; 12 million residents plus many more visitors every year.

The newly-arrived expat stumbles through these crowds bewildered and overwhelmed. But native people deftly steer through the masses, moving at a quick-time march.

Expats will quickly learn that parts of the city are best left alone during busy times of the day as they will be choked with tourists.

7. You have a favourite bakery

Food is important in French culture, with laws stipulating that there must always be a bakery open to serve a hungry populous.

Expats will quickly develop the taste for fresh bread and pastries, with supermarket substitutes being unacceptable.

After spending enough time in the neighbourhood you’ll find you favour one bakery, and that no other will do.

6. You dress the part

Paris is a famous fashion hub. Even the most casual of dress codes will see the locals dress to impress, with style and grace that the rest of the world saves for special occasions.

The little black dress and or the gent’s blazer are timeless classics that work in the office, on a date, or strutting through the marketplace. If you own more than one of these, you might be starting to dress the part.

Parisians are big on manners. It’s not just greeting each other or saying ‘merci’, but using the formal grammar as required.

This is especially important in the workplace, where hierarchy matters.

4. You aren’t bothered about customer service

Politeness is important, but service with a smile is seen as sycophancy. Don’t expect shop staff to engage in small talk or bend over backwards to help.

3. You no longer get stressed about bureaucracy

Every expat has conquered a mountain of paperwork, but the red tape involved in moving to France is particularly headache-inducing.

You’ll have to gather all sorts of bits and pieces to apply for visas and work permits, medical cover and job applications. Expect a lot of this to require appointments with various officials and lots of queuing in bland government offices.

With strict deadlines, this bureaucracy can be a highly stressful, Sisyphean task. One office will demand paperwork that can only be issued by another office, and only when shown the form you were originally chasing.

A few times running this gauntlet quickly numb expats to this stress.

2. You have a ‘c’est la vie’ attitudes toward strikes

Some things just can’t be helped. There will be days when the roads are clogged with protestors, while everyone in Paris seems to have their turn at going on strike.

France has a long, proud tradition of workers’ unions and they still hold real power. Everyone from farmers to truck drivers, fishermen to firefighters will go on noisy, disruptive strikes. Expect transport to shut down at short notice and companies to be closed for business.

1. You forget about the rest of France

The City of Lights is more than just the capital of the country, it is its beating heart and cultural hub. Politics, art, history and entertainment are all tied inextricably to Paris, meaning it’s easy to forget about the rest of the country.

Despite being the largest EU country by area, there is a habit amongst Parisians to limit their horizons to the 20 arrondissements. Anything outside that may as well be on the dark side of the moon.

If you’ve been in Paris for long enough to forget about the rest of France, you might have become a true Parisian.