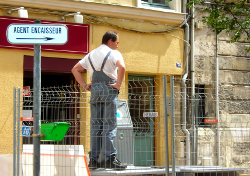 So many British citizens are now moving to France or buying a holiday home here that the demand is steadily growing for tradespeople, or artisans as they are known in France, to work on their houses, carry out groundwork or do any other job that may be needed. We Brits often prefer to buy virtually derelict or ancient dwellings and while this can be a happily symbiotic arrangement because a lot of French people yearn for clean, modern houses on neat estates while we Brits long to escape that and to live in the older, stone-built houses that have been left behind and have often been empty for years, there can be problems.

One of the problems can be that while we want to live in and renovate these houses, many Brits find that they have neither the knowledge nor skills required and often cannot speak sufficient French, so finding an artisan to do any work can be tricky. Many give up trying to find a French artisan because of the language barrier and can be tempted to employ someone who hasn’t registered here but was in the building trade back in the UK or dabbled in electrics or put in a bathroom in their own house etc.A great many Brits are apparently working illegally or ‘on the black’ here. In the UK, it is extremely easy to set up in business, as a sole trader especially. You just let the tax office know and print a few business cards and away you go. Not so here in France. In fact, it is illegal to work here without registering and because so many people are risking it, the law is being tightened up and gendarmes have even been known to swoop on illegal workers in dawn raids, seizing computers and bank records of those who often think that they are legal because they are registered in the UK.

Registered artisans in France should have their Siret number and/or UK registered company number clearly printed on their advertisements, quotes, flyers or bills. The SIRET number is an identification number for each French business. It is unique to that business and legally linked to a particular person. The words “Siret en cours” may be displayed if the Siret number is being processed – to find out more, you need to ask the artisan if you can see proof as all are supplied with documentation if the process is underway or with papers if they are registered and you can also check direct with the Chambres de Metiers. If the bulk of the artisan’s work is carried out in France or if they are resident here, then a UK number won’t usually suffice. Also, if the business is registered only in the UK, customers will not be allowed to offset the cost of an artisan’s work against capital gains taxes when they sell, which is quite a big deal if thousands of Euros are spent. Equally, customers won’t benefit from the ten-year guarantee on work or the 5.5% TVA instead of the normal 19.5% on work and materials.

If you would like to check if a number is valid, try the website www.artisan-anglais.com which has several pages with explanations about how the numbers are constructed, publishes artisans’ cautionary experiences and gives details of websites to check the Siret or Siren numbers of artisans. Artisan Anglais will only accept artisans who are legally registered or who are in the process of becoming registered and attempts to make it clear to both customers and unregistered artisans that there are penalties to be paid by both sides plus you can be reassured that ALL the artisans found on the website have stated that they are legally registered.

On a website like www.recherchez-vous.com, who are part of Artisan Anglais and who will also only accept legally registered traders providing a service in English, the numbers may appear different to Siret numbers but can still be checked out with the appropriate authorities in the region where they are based. All registered workers should be immatriculated with the Centres de Formalites des Entreprises (CFE) at their local Chambres de Commerce, Chambre de Metiers, Tribunaux de Commerce, or the URSSAF, Services Fiscaux, or regional office of the INSEE.

Insurance is just as important, as if the legal artisan isn’t actually registered for the particular type of work that he or she is doing then the work won’t be covered by insurance. It is wise to ask to see insurance documents for responsabilite civile and decennial, which are the two obligatory insurances in France. The insurance document will show and list the items or trades which the artisan is insured to undertake.

The penalty for an unregistered worker can be up to 3 years in prison and a 45,000 Euro fine, not to mention the payment of back taxes, social charges and associated penalties for overdue payment. The customer may also end up in court if they have knowingly employed someone who is working illegally and could face hefty fines and a criminal record.

It really isn’t worth the risk – the gendarmes who may be on their way tomorrow night to carry out a dawn raid on your unregistered, illegal artisan may call on you as well!