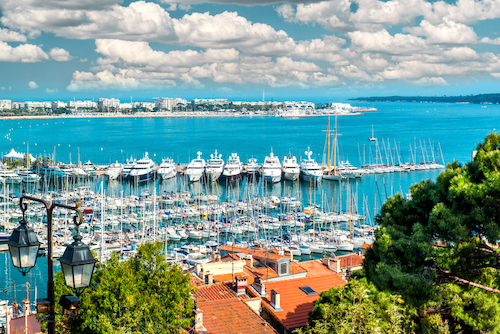 The French port of Cannes is a legendarily lovely place to live, with its silver screen associations and glamorous image. For many people, it’s the first place that comes to mind when they think of the South of France: yachts, beaches, sophisticated dining and shopping as well as the classic Mediterranean climate. It’s a place for which many people have a hankering – but is that just a pipe dream? How easy is it to find accommodation in the town?Obviously, this depends on what you have on mind. Are you looking for a permanent place in the sun or just a short-term apartment let?

If you’re renting, you’ll find many websites dedicated to property in Cannes, which may not be as expensive as you fear. What you opt for will, of course, depend on your budget. Small unfurnished apartments and private rooms are available from £700 per month, and we found a few for less than this online.

Buying property will cost a lot more. However, as the Wall Street Journal pointed out in 2017, prices in Cannes have not yet regained their peak of a decade ago. French austerity policies, recession and the Eurozone debt crisis have all had an impact on property in Cannes. Real estate company Beauchamp Estates, who also have offices in Mayfair and who deal with the high-end property market, says that cost per square metre in luxury accommodation is comparable to prices in London, Paris and New York, meaning it won’t be cheap. Investors prefer two- or three-bedroom apartments with a sea view, so there’s a lot of competition.

“City-wide, the real estate market has remained relatively stable thanks to Cannes’ idyllic location on the Riviera and its wonderful Mediterranean climate.”

Fred Lilloe, of Knight Frank in Cannes, has reported that “…an Indian-American family paid $39.4 million for an apartment in the upscale Californie neighbourhood. And earlier [in 2017, we] sold a modern eight-bedroom villa on the city’s fringes to a Norwegian family for $30.3 million.”

However, assuming you’re not a multi-millionaire, you will still be able to find some more affordable options. A search on property website fineandcountry.com brought up some pleasant, central single bedroom apartments – with sea views – for under €300K, although we didn’t find anything below €250K.

Expats report successful property searches by scouring websites such as aplaceinthesun.com, fineandcountry.com or seecannes.com. Some of these agencies also have branches in the UK and the USA; if you’re looking to buy, you might prefer to use an estate agent who has a base in your home nation as well as expertise in selling French properties to expats. Such an agent will be able to guide you through the buying process and advise you on any idiosyncrasies that are specific to the French mortgage process.

What Are The Downsides?

A post on one of the French property forums recently alerted us to a scam targeted at people looking for in Cannes. The poster put an ad on popular website Leboncoin, which got a response from someone offering her a two-bedroom flat for €550. As she said, it seemed ‘too good to be true’ – and offers that look too good to be true, usually are. The respondent said that her husband was moving to Corsica and the family wanted someone to look after their apartment for the year. Wisely, the original poster was reluctant to visit the apartment on her own – and in any case, the location of the apartment was not given. She was concerned that this might be a scam.

In reply, a number of people said that they’d come across a similar offer, revealing that this is indeed a scam – probably involving the appropriation of a deposit. A number of websites have also raised concerns about booking scams for rentals in Cannes – when you get to the location, having paid your booking fee, you find that your apartment mysteriously isn’t there. Check out bookings companies on social media, and phone them directly. Make sure that any company you deal with has a terms and conditions page on their site as these are legally binding.

Basically, we recommend that you check out any online agency via one of the many expat forums dedicated to living in France. Word of mouth recommendations are usually a solid way of finding accommodation, and in this age of social media, it’s easy enough to find someone who has the experience you need.

Will I Be Able To Find Work?

Most jobs in Cannes are based in the service sector. Expats might work in tourism, film, or the tech companies in the Sophia Antipolis technology park, such as Orange and Hewlett Packard. Unless you have extensive savings, if you’re planning to move out there, it’s well worth sorting out your job prospects before you go – and in any case, you won’t be granted a long stay work visa unless you already have a job.

Will I Need A Visa?

If you’re an EU citizen, then no, you won’t. However, if you’re British – as the UK teeters on the verge of Brexit – it’s a good idea to check out all the ramifications first, as you may need a carte de sejour. The French authorities have been dealing with applications from British expats, and some prefectures say they’re struggling with a backlog, so this might not be the best time to relocate. In addition, there have been worrying reports recently that some French prefectures have started to enforce income checks on British residents as Brexit creeps closer, with some expats being given a 30-day notice to leave the country even if they’re homeowners.

So let’s hope that the political situation soon settles down and that the words of Mark, an expat Cannes resident, remain true: “To sum up our experience living in Cannes so far, we would have to say… exciting, warm & cosmopolitan!”

Have you lived in Cannes? Share your thoughts in the comments below, or answer the questions here to be featured in an interview!