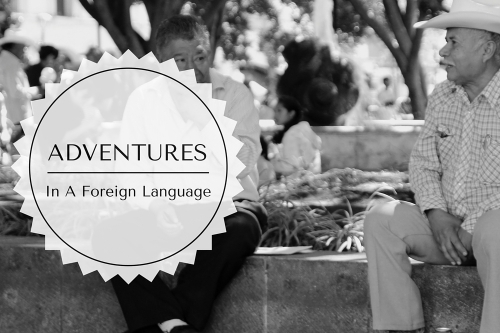 Even the most unprepared expat usually learns a few helpful phrases if their destination country uses a different language. Armed with ‘do you speak English’ and a winning smile, plucky monolingual expats can usually bluff their way through most troubles or be rescued by a more skilled linguist.

That’s not to say those moving overseas with diplomas, certificates, and hours of classroom study aren’t also caught out by dialect dramas. Simple mistakes or misunderstandings can trip up even the most skilled of linguists.A wonky accent, a mispronounced vowel, or an innocent word with rude connotations can make all the difference between clear communication and accidentally insulting your boss.

We’ve polled our readers to find their most toe-curlingly embarrassing moments when attempting to communicate in a language that is not their mother tongue.

Your card has been de-nein-ed
Holly Kooi
Austria

When I first moved to Vienna, I lived by a “nein” philosophy, meaning if someone in a store asked me a question, I would always respond with “nein” so as not to accidentally sign up for a card or subscription. My philosophy backfired at an IKEA checkout when I said “nein” to the cashier who just wanted to make sure the credit card with which I was paying was actually mine.

She wound up calling management, I was super confused, everyone in line behind me was getting impatient… It was a nightmare. Finally, something clicked and I realized what happened and showed the cashier every picture and form of I.D. I had on me to prove it was in fact my credit card. It was incredibly embarrassing.

My Tica wife and myself were visiting my mother in the States and my wife was feeling faint or sick. A couple of hours later I asked my wife “eres mejor?” (are you better). My mother started yelling at me saying that I should not disrespect my wife by speaking to her like that.

I went to a graduation party and shook everyone’s hand who had just graduated. “Tanti Auguri” means ‘congratulations’, but I said “tante anguria”, which basically translates happy watermelon!

I still get reminded of it 25 years later.

We were just learning Spanish and our housekeeper was over with her daughter. They moved the couch to reveal a huge spider on the wall.

My wife asked the young girl if she was afraid. But she said, “tiene mierda?” (have you sh*t?), instead of “tiene miedo?” (are you afraid?) We all had a good laugh.

While in Denmark last summer, I asked if we were having “killing” for dinner. I meant to say “kylling”, which means chicken. “Killing” means kitten.

The kids were horrified, until my daughter explained what I meant to say. I need to work on my pronunciation!

I live in Egypt and a few months after I moved here I had learnt a few Arabic words so was eager to try them out.

I needed to buy a few things for my flat so went to the furniture store and with all the confidence in the world I said to the man “ana ayza toofah”, which translates to I want an apple.

He just looked at me then walked away (possibly to go find me an apple from a nearby shop). I realised what I had said and called after him to say I wanted a pillow not an apple!

I was in Paris once, asking the hotel clerk where the nearest laundromat was. Her English and my French were poor, but we figured out that both our Spanish was pretty good and mission accomplished.

Kimi and I arrived for the first time in the town where we had bought our house the previous year and went to check in at the local family-run hotel.

Exhausted from the trip, we were anxious to check in and walk up to the house for our first one-on-one glimpse of our “new baby.”

We had both practiced a very basic conversation that would be common in checking in at a hotel and we felt ready as we entered the lobby. To our surprise, having been expected, numerous people were in the lobby waiting and surrounded us!

Hugging, kissing, shaking hands and everyone asking something in Italian. Kimi and I found ourselves back to back trying to accommodate everyone for every reason, talking and answering as fast as we could. All seemed to be going along famously until everybody went quiet and was staring at me.

Kimi started laughing and told me that in my enthusiasm I had reverted to Spanish!

A Spanish guy once messaged me before I was fluent in Spanish, he wrote “hola linda” (hello pretty).

Offended, I replied that my name is Eva. I only realized months later…

I was talking to my mother-in-law about the preservatives in food. She kept laughing because I kept saying “preservativi” which means condoms.

I called a Portuguese friend ‘yellow’ for months when her name is Mareilia.

I went to the local butchers and asked for half a kilo of “cane trittata”. The woman looked at me strangely as I mimed cutting up meat with scissors while asking for minced dog.

She finally called for her husband who explained the difference between carne (meat) and cane (dog).

I went to the supermarket and decided to look like a ‘local’, so I said to the cashier “derrière” (bum) instead of “de rien” (you’re welcome).
The place was full and everybody around looked at me straight away. My son simply vanished.

I realized what I said when I got home and found my son in his bedroom, laughing.

I used to work in Health & Safety for a Tour Operator in Italy.

I once asked a hotelier if I could see his “culo” (bum) instead of “culla” (baby cot). There was an awkward silence…

Every Sunday, my fiancé and I only speak Spanish, no English words allowed!

Went to hotel reception and asked for “sopa” (soup) instead of soap.

Some 40 years ago, before I had learned the difference between “tetti” (roofs) and “tette” (tits), I told my friend, the local priest, that my new apartment had a great view across all the roofs of the village – at least, that’s what I thought I’d said.

In his praise, I must record that he didn’t bat an eyelid; it was another friend with us who cracked up laughing and later explained.

I was working in a sandwich shop with my Polish colleague, Klaudia, and she was serving a customer who obviously didn’t speak much English.

He asked her for a “hot tula sub”. Knowing he meant “tuna”, Klaudia made him the hot tuna sandwich, but held in giggles, as “tula” translates to “dick” in Polish. He’d ordered a dick sandwich.

You’re going to put what in your drink?
Michaella Brown
Portugal

My husband had been asking for ‘pilinha’ in bars and restaurants for years until my son (aged about 6 at the time) corrected him one day.

We always wondered why the question was often met with confusion, bewilderment, hilarity, and once even anger…it didn’t help that he used to try and mime it.

Worse again was when my daughter was old enough to drink through a straw and he then began asking the person at the bar if they had two ‘pilinhas’. This went on for literally YEARS until we realised.

A bit of a balls-up…
Jo Bruce
Spain

I’ve never lived it down.

Don’t even ask about the time I asked for “polla con patatas” (penis with potatoes) at a takeaway place in Spain.

I embarrassed myself pretty often during my first few months in the UK.

I once ordered a “chocolate mouse” instead of mousse. When I broke my ankle I said, “oh my god, my uncle”.

When I was nine years old and starting to learn English, I was telling one of my dad’s friends how our trip to London went.

I told him my dad had taken me to a “topless bus”. He stared at me shocked and asked me what I meant. I told him that it was super fun and we didn’t have that in Costa Rica. I said that you can ride in the topless bus and see the city.

He eventually understood what I was talking about and told me that it was a double decker bus. He later asked my father to explain what topless meant. We both laughed at the thought of riding topless in London!

Last year, I went to Marbella, Spain, for a short trip before going to the very diverse area of Southampton, England.

I walked into a cafe in Southampton and asked the barista, an Italian girl, for a coffee – in Spanish.

I then apologized in Italian, apologized again in English, and the barista was so surprised that she replied “what?” in Italian. We were both a tad confused, as was the customer behind me, to say the least.

When learning American Sign Language, I once said that the night sky was full of popcorn instead of stars.

My friend asked for a lesbian doughnut instead of a lemon one.

Living in the Netherlands, I went into a shop and told the shopkeeper “I am a frog” in Dutch, intending to say “I’m having a little look around.” The words for “little look” and “frog” are quite similar.

In France, I intended to compliment the restaurant owner on his restaurant, and ended up telling him how handsome he was, by accident. “Bon” and “beau” sound similar to American ears, but not to French ones! He was late middle-aged, average looking, and he blushed bright red.