Home » General » Are UK Nationals Moving Abroad Because Of The Brexit Vote? 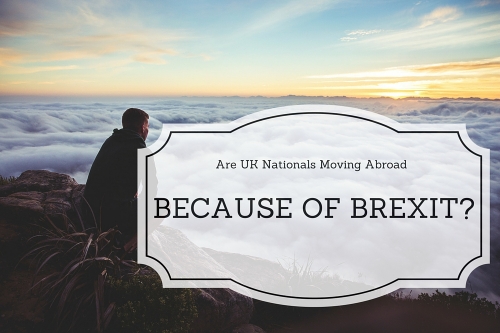 The European Union, more commonly referred to as the EU, is an economic and political partnership involving 28 different countries across the continent. It was formally established in November 1993. The United Kingdom became a part of this alliance in 1973, when it was still known as the European Economic Committee (EEC).Other member nations of the EU include Austria, Belgium, Bulgaria, Croatia, Cyprus, Czech Republic, Denmark, Estonia, Finland, France, Germany, Greece, Hungary, Ireland, Italy, Latvia, Lithuania, Luxemburg, Malta, The Netherlands, Poland, Portugal, Romania, Slovakia, Slovenia, Spain and Sweden. A few of these nations are on par with the UK in terms of living standards, welfare, job opportunities, education, healthcare and other benefits. However, many EU citizens, mainly from Eastern and Southern Europe, move to the UK in search of a chance to lead a better quality of life.

Membership of the European Union has been a bone of contention among the Brits since the beginning. Moreover, the objective of the partnership has undergone a significant number of changes in the last several years, which has caused the British electorate to further question the feasibility of continuing their membership. In fact, over the years, two plebiscites have been held across the country, giving people the chance to vote on this issue.

The most recent plebiscite was held when, in an attempt to resolve matters once and for all, the then Prime Minster of the UK, David Cameron, decided to hold another referendum across the UK and Gibraltar, asking people, “Should the United Kingdom remain a member of the European Union or leave the European Union?” Voters could choose to “Remain” in or “Leave” the EU.

Any British national above the age of 18, who was on the electoral roll and was living in the UK, could register for participation in the referendum. This right was also extended to the citizens of Ireland, Malta, Cyprus and the Commonwealth Countries, living in the UK as permanent residents. British expats who had been residing overseas for under 15 years were also allowed to participate in the referendum. However, UK nationals who had been living overseas for more than 15 years were not given the chance to vote, in spite of several appeals. This rule goes against the voting rights of several nations, including the US. British expats believe that they should be given the right to vote for as long as they retain their nationality.

Unlike in the past, the June 23, 2016 poll showed that a small majority of the British voters were in favor of “Brexit”; they wanted Britain to exit the EU. This sentiment has been attributed to a number of different factors:

Part of the local population believes that the membership weakens the parliamentary sovereignty of the country.

Surveys show that the net migration issue was one of the main reasons people wanted to exit the EU; some Brits are of the opinion that leaving the EU is one way to curb the rising immigration to the country.

This step would also allegedly lead to an immediate saving of around 12 billion pound sterling per year, as the UK would no longer have to contribute towards the Union’s budget.

Some exit lobbyists also suggest that Britain may reinvest itself in the form of a supercharged economy, like Singapore, once it is free of the rules and regulations set by the EU.

Of course, there are bound to be some repercussions of quitting an alliance like the EU. Currently, citizens of all 28 members enjoy the right to free movement as no state can expel or bar any national of another member. As a result, a huge number of Brits have chosen to study, retire or take up jobs in other European states. However, after the exit, British citizens will not find it as easy to move to some of their favorite European expat destinations like Spain, Ireland, France, Italy and Greece. At the same time, EU nationals will face several restrictions when it comes to relocating to the UK.

In the present situation, British citizens residing in the EU can own property, work without an employment visa, access the same healthcare as the locals and get their state pensions after their retirement. Unless the UK manages to come to a feasible agreement with all the nations, the position of their expats will be exactly the same as foreigners from the American, Asian and African continents.

Both David Cameron and Boris Johnson have shown a strong desire for the UK to stay with the European Union’s Single Market. However, Donald Tusk, President of the European Council, asserted that there cannot be an “a la carte” access to the Single Market once Britain exits the EU. He stated that choosing market access isn’t possible if the authorities and citizens don’t adhere to freedom of movement. The whole situation has lead to a sense of foreboding, not just for EU nationals, but also the British and especially those live, have retired or are planning to relocate within the EU boundaries.

A recent study conducted by the London School of Economics showed that the number of Brits looking to move overseas has gone up by 30% since the referendum, with Spain being the most popular choice. About 10% of the Remain supporters considering relocation to Spain are aged between 18 and 25.

According to The Local, these findings are further backed by a popular Spanish real estate agency’s claims. Lucas Fox International Properties revealed that it had received an increase in enquiries from UK-based clients after the referendum.

The three biggest cities in Spain – Barcelona, Madrid and Valencia – seem to generate the most interest from UK nationals, probably because they offer the most in terms of career opportunities. This shows that instead of being unsure of their rights and wary about living in the EU, Brits are seriously thinking about moving in the near future.

Even though real estate prices in Spain have gone up slightly after the Leave Vote, many Brits believe that they will benefit if they buy property and settle down in this country. Brexit may therefore have a positive impact on the real estate market in Spain.

A week after the Brexit vote, Mariano Rajoy, Spain’s Interim Prime Minister, issued a statement saying nothing would change for British expats in their country during the negotiation of the exit. For this period, Brits would have the same rights they enjoyed as EU members.

Many British expats who have been living for years in other EU nations because of the right to live agreement and have purchased property or set up their businesses have been considering dual citizenship or even a change in citizenship, just so that they do not have to make any major changes to their lives.

Being married to an EU national or having invested in a country through a business or a property makes it easier for them to obtain citizenship. Of course, this means that they will have to go through the immigration formalities, including language tests in some cases, before they are granted the citizenship.

The reasons for Brits to relocate

According to the United Nations, there are currently more than 5 million UK citizens living overseas and around 1.3 million of them are settled in various countries that are a part of the EU. The top 3 destinations for expats from the UK in the EU are Spain (with about 319,000 Britons), Ireland (with 249,000 Britons), and France (with 171,000 Britons). Italy and Greece are not very far behind.

Many of the expats consider their country of residence to be their first home and are actually planning to apply for citizenship to that place and switching nationalities, just so that they aren’t made to leave.

The Brexit vote brought about immediate problems like economic instability across the UK. Several foreign companies and investors have shut down their establishments, increasing unemployment across the country, which has an adverse impact not just on foreigners, but also on the locals. As a result, a huge number of young professionals from the UK are seeking job opportunities in other nations. The Brexit vote has therefore caused not just EU nationals, but some Britons to move overseas too.

There has also been a lot of fluctuation in the Pound Sterling as investors are concerned about the risks of Brexit. Soon after the referendum, the Pound fell precipitously. For those who get paid in British Pounds but spend in a different currency, this decline could be disastrous, as it undermines their spending power. British pensioners, who make up the biggest group of expats living in various EU countries, are the most severely hit by these currency swings.

It is a well-known fact that the outcome of the referendum was a close one, where 48% were in favor of Remain, whereas 52% opted to Leave. Many Remain supporters claim to feel disconnected with the UK after the decision to leave. In fact, the incomprehension of UK’s rejection of the EU is widely shared by many locals and expats.

The people that wanted to remain a part of the EU are worried that their country may suffer in several ways because of the exit, which will have a cascading effect on the residents. Some are also considering relocation as a way to escape the problems they foresee.

David Cameron and the Prime Ministers of other European countries have done their best to calm the anxieties of British and EU nationals by reiterating that there will be no immediate changes in their circumstances. Unfortunately, the word “immediate” hardly helps reassure anyone. Instead, what people do see are inevitable problems in the future.

In the next 2 years or so, the UK will initiate Article 50 of the Lisbon Treaty, during which the terms and conditions of Brexit will be negotiated. The fate of British expats in Europe and EU citizens in the UK will gradually become clearer during this process.

Fortunately, there are a few international laws that offer some degree of protection to the citizens on both sides. According to the Vienna Convention of 1969, all those who owned property within an EU nation before the Brexit should not be at any risk of losing the rights to their personal property. However, after the exit there are likely to be changes in the property taxation and inheritance laws. It is essential for people to seek complete information on these policy revisions.

Since the UK will continue to remain a part of the EU during this period, British expats living abroad will enjoy the right to free movement. They can also own property at this time and there is a strong possibility that they’ll be able to continue to do so. After two years, Brits could lose their right to work across Europe and may have to apply for their Blue Cards. Some host countries may ask UK nationals to comply with rules that are more restrictive in terms of work permits and setting up a business. There is a rule followed by 15 of the EU Member States, which says that a foreigner can only be hired if no suitable professional from the EU can be found. This worked in favor of the Brits before Brexit. However, after leaving the EU, British expats may find it more difficult to get employment in other European nations.

However, all this is just speculation as no country has ever invoked the exit clause before this and what really happens once Britain leaves the European Union will depend entirely on the type of deal both the parties strike. If the UK government implements policies targeting EU workers, they are likely to trigger some kind of retaliation against their citizens overseas. Changes in the rights and status of British citizens in EU countries may actually be decided on a country-by-country basis.