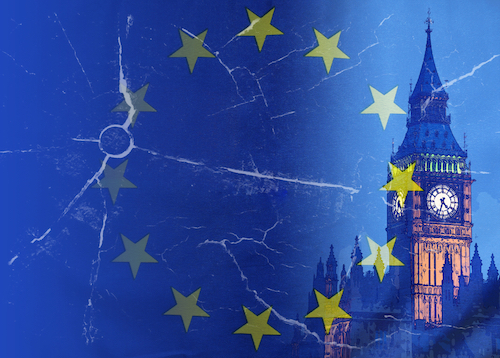 Brexit is still with us, but Theresa May herself is (just about) not, having now stepped down from the leadership of the Conservative Party. This has precipitated the inevitable leadership race, featuring everything from wild promises from the front-runner, Boris Johnson, to accusations of espionage (whether Rory Stewart will become the next James Bond rather than Tory party leader remains to be seen). At the time of writing, of the remaining candidates, Johnson has been bullish about making the Brexit deadline and Hunt is more cautious and say extra time may be needed. The Defence Minister, Tobias Ellwood, has told the BBC that a backbench rebellion might well take place to prevent a no deal Brexit.Ivan Rogers, the former UK ambassador to the EU (he resigned in 2017 after clashing with the PM), has commented to the Guardian that we are being led into Brexit by a political elite “which has great difficulties discerning and telling the truth,” an assessment which, by now, should surprise no-one. His belief is that the UK will leave the EU without a deal, in what he has described as an act of ‘economic lunacy.’

Part of this belief is shared by Boris Johnson, meanwhile, who has stated clearly that it is his intention for us to leave the EU on October 31st (it has not escaped anyone’s attention that this is also Hallowe’en), with or without a deal.

Germany’s EU affairs minister, Michael Roth, seems to have ruled out any possibility of a renegotiation, saying:

Basically, the message both at home and abroad is that everyone’s fed up with Brexit and no-one wants another dilatory period of tinkering with the deal that’s already on the table: the EU’s attitude is that a line has to be drawn under it. However, Ivan Rogers has also told the Guardian that a no deal is not overly feared in the EU capitals, so it might be that the expectation is that the new Tory leader, whoever he is, will find himself constrained by Parliamentary wrangling in the same way that Theresa May has been.

Meanwhile, British expats in the EU continue to remain in limbo, with a clash between EU officials and the British over a plea from the latter to ring-fence the rights of the thousands of Brits who are resident in Europe. Brexit Secretary Stephen Barclay is keen to secure an agreement from Brussels, to save having to negotiate separately with the 27 member states. But Michel Barnier has told him that although “no British national will be left in the dark,” the process is far from straightforward. The UK has secured the rights of EU citizens here, and the British government would like reciprocity so that things like health care are ensured for expat Brits. But Barnier’s priority remains the establishment of a deal.

Individual nation states have, however, proved more accommodating. Portugal, for example, has set up a Brexit task force, Portugal IN, incorporating a raft of measures to make sure that British expats and businesses in the country have as smooth a transition as possible. Britain and Portugal have had alliances since the 1300s: a large part of the Portuguese economy relies on expat or tourist input and the government is naturally keen to ensure that this is protected from any negative effects of Brexit as far as possible. Going forward, all UK expats in Portugal have been granted residence rights: if you’ve lived there for under 5 years, you’ll get a temporary residence card, but if you’ve lived there for more than that, you’ll be given either permanent residency or long-term resident status.

Businesses also have an eye on Portugal. According to according to FDI Intelligence, a Financial Times service, 22 UK companies have invested in the country over the last couple of years, making the UK the leader in foreign investment over China, the Netherlands and Spain, and bringing £117 million with them. Rui Boavista Marques, the director of the Portuguese Trade and Investment Office (AICEP), told website Internationalinvestment.net:

"Our market quotas here are strong but we want to consolidate them. We want to build the level of trust with our British commercial partners because we believe that Brexit will create opportunities and we have to be ready."

Encouraging stuff – and Yourmoney.com estimates that the mood among Brits abroad remains based on a mixture of realism and optimism, saying that expats expect the economic climate to worsen for them over the next year, but that they also anticipate that their personal finances will be able to ride out the crisis.

Paul Byrne, CEO of money transfer service CurrencyFair, said: ”Expats believe the world has underestimated the financial implications of Brexit and they are proactively managing their personal finances in response.”

It’s this ‘proactive management’ which is key: relatively few British residents are trying to ‘Brexit-proof’ their finances, mainly because people really don’t know quite what’s likely to happen, but expats, up against the sharp end, are trying to safeguard savings and pensions as far as possible.

In the meantime, we urge people to do the obvious: keep an eye on developments relating to Brexit in their adopted nation, make sure you’re up to speed with any legislative changes concerning residency, and if you’re in the UK, do check your passport. A number of countries are asking for six monthly validity and you don’t want to be caught out if you’re travelling into the EU with documentation that’s close to expiry. As before, a great deal depends on whether we leave without a deal – a possibility which is looking increasingly likely. And this is likely to have an impact on things like freedom of movement, pet travel and the EHIC card: as Brexit approaches, make sure you’ve got travel insurance if you’re going to Europe, just in case.