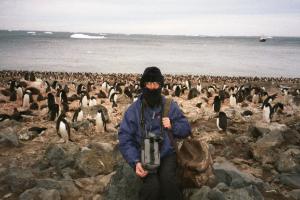 David Mundstock (username "IntrepBerkExplorer") is a regular contributor to the Expat Focus forums where he keeps us up to date with his latest adventures around the world. In this interview we get to know David a little better and discover what inspired him not only to travel but also to document his experiences for others.

Expat Focus: David, can you tell us something about your background?My parents were both born in Europe, so I grew up knowing there was much more to the world than San Francisco.

Expat Focus: What was the inspiration which led you to travel the world and share your experiences with others?

Cinerama movies from the 1950s are my earliest memories of seeing wonderful places that I hoped to visit some day. Other movies filmed on location provided similar incentives in later decades.

Michael Moore’s “Roger and Me” (1989) suggested that anyone can make a movie. I had received positive feedback on my still pictures of China and Russia, encouragement to try something more ambitious. Sony’s Hi8 format seemed to be the right camcorder to buy in 1990. By then I’d seen travel videos taken by people on my tours of Russia and China, and thought I could learn how to do these in a better way by excluding ordinary tourist activities.

Analog editing was to a wonderful VCR made for that purpose. Showing the earliest travel videos at home as S-VHS and at work proved they were popular right from the start. I also placed them on public access cable TV.

Getting my first computer in 1996, I became hooked on all the possibilities offered by free internet websites. By 1999 I had still pictures scanned to disk, creating the Intrepid Berkeley Explorer site, very small at first. I was also turning out better travel videos each year. It seemed a dream to connect the videos to my website.

After retiring in 2002, my objective was to buy a new computer intended for video editing, which I would learn, go broadband, and somehow get all the videos on line, expanding the Intrepid Berkeley Explorer site from still pictures to free, non-commercial travel videos.

Thanks to hard work, good luck, and essential help from Peter Larsen, whose site is AdventurePics.com, we pulled this off. Now 35 free Intrepid Berkeley Explorer videos from every continent are streamed over the internet, 10 of them with superior digital editing, better captions, and eye-catching transitions.

Expat Focus: What kind of feedback have you had from visitors to your website?

The stills have had well over a million viewers, the videos 460,000. I try to answer every e-mail, made possible since everyone does not send feedback.

Nearly all people who comment on Intrepid Berkeley Explorer videos and stills have been very encouraging. I’m referring to viewers who come to my actual websites. The most common criticism is that I mis-pronounce place names in foreign languages. Can’t help that, being a language horror. Have to get across that I’m not botching these words intentionally.

With 400 clips from the 35 videos up on YouTube, and over 7 million hits, there are far more hostile comments, insults directed at me and the subject matter. Never expected to become a censor, but ethnic hatreds and bigotry deserve to be removed. With clips there is also less tolerance for my sense of humor, which includes absolute nonsense and satire fairly often when I appear on camera.

It’s been a surprise that if I sound serious about some absurdity, such as a gorgeous Russian palace being moved to Disneyworld in Florida, this is accepted as truthful, with me getting expressions of regret. I’ve tried to become even more ridiculous, but hopefully never dull.

Expat Focus: Which destination did you enjoy most and why?

India, my longest trip way back in 1991. Here is a nation most unlike anything Westerners are familiar with. India is the cradle of ancient civilizations and religions that have remained intact, despite conquests and colonization. One adventure after another. Also helped that I love Indian food and got to stay in palaces now serving as hotels. Not my best video, since greater editing skills came after more experience and practice. An absolutely fabulous tour.

Expat Focus: What is the strangest experience you've had while traveling abroad?

Let’s try one that’s positive and another quite the opposite. In old Delhi, India, I encountered a large demonstration with people sitting in the street and holding banners. I was clueless about their cause and what the reaction might be to filming them. Since nobody spoke enough English to help, I decided to step out of the surrounding crowd and take this video shot.

Immediately sight of me and a camcorder caused the demonstrators to jump to their feet, waving banners, and offering such sudden enthusiasm that I must have been mistaken for a member of the press, not just a tourist. That was a most positive reaction, highly unexpected, but great video.

In Hangzhou, China, is a famous Buddhist Temple, with various rules as to where pictures are allowed or banned. I asked our guide what would happen if I tried taking video of a large statue of Buddha considered off-limits. She said a monk might yell at me to stop. Seemed an OK minor risk.

So I try to hide and started the camcorder. Almost immediately a monk grabbed the camcorder and would not let go. He was quickly followed by our tour group’s local guide and national guide who also grabbed the camcorder. Now there were four pairs of hands, including my own on the camera, and a heated argument being conducted in Chinese. This would have been wonderful to photograph as a spectator, but not so great as a participant.

Eventually the camcorder was released and I was advised to vacate the area. I still believe that monk failed to practice Buddhist compassion.

Expat Focus: Which countries do you still intend to explore?

I am going next to Canada’s Rocky Mountain National Parks, the Banff-Lake Louise area in August. My hopes are high for a scenic adventure that includes glaciers, other vistas, and animals.

After that perhaps Chiapas in Mexico and Palenque, the best Mayan site I missed back in 1995. I’m also thinking about Costa Rica and Bhutan.

Expat Focus: Do you think that most Americans are keen to travel abroad? If not, what makes you different?

I believe that Americans, like everyone else, enjoy foreign travel. I’ve already taken quite a few trips in the U.S., but that’s far too limiting. If I’m different, it’s because I really enjoy travel photography as fun, and like the hobby of trying to be creative in putting together my videos. Also I hardly ever get scared, regardless of where I am, and that includes setting off on my own, with or without a tour.

Expat Focus: What message would you have for those who are considering a permanent move to another country?

Fact is I am a tourist with cameras. I’m no source of ideas about moving anywhere, having lived in the same Berkeley house since 1975.

Expat Focus: Our favourite image is of you and the penguins in Antarctica – what is your favourite photo and why?

I think like a video camera, not a still camera. The penguins were wonderful, but the most remarkable video sequence I ever took was of an amazingly friendly whale in the San Ignacio Lagoon, Baja California, Mexico. This whale craved human contact and did everything short of jumping into our boat, a true highlight from “The Whale’s Tale” video.

Expat Focus: What do you like to do when you're not traveling abroad?

My other hobbies are hiking and movies, as a DVD addict, plus the internet in general. I have 3 websites on subjects totally unrelated to travel, including City of Berkeley politics, my major activity in the 1970s.

Expat Focus: David, many thanks for your time!