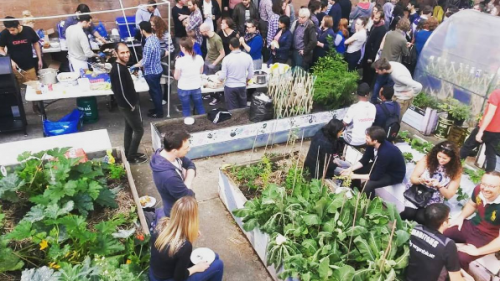 On Saturday 17th September, Expat Focus sponsored the Refuweegee Good Food, Good Mood barbeque in Glasgow. The following is a report from the event organisers.

The aim of the Good Food, Good Mood Barbeque was to host a community get together; a chance for people who might not normally socialise to share food and fun in the sunshine, celebrating and embracing our multi-cultural society.We were confident that we could pull all of this off with the exception of the sunshine. Manic checking of weather forecasts factored largely into the final stages of planning and turned out to be completely unnecessary.

The fates conspired to keep it not just dry but also basking in sunshine in the gardens of Kinning Park Complex in Glasgow’s Southside.

The star of the day was definitely the food. Delicious lamb and chicken kebabs on ‘the right type’ of flatbreads, were prepared and cooked to traditional Syrian and Iranian recipes by a team of hardworking Refuweegees who clearly took huge pride in sharing an aspect of their culture with us. There is something special about sharing food with people, it was clear that plenty of us loved the symbolism behind the breaking of the flatbreads.

That said, our Refuweegees had plenty to say about the way in which things had to be done. Getting the right type of flatbreads took on hints of a Herculean challenge and success was met with nothing more than a nodded “good”. Farid was less than impressed that we expected him to cook on a gas barbeque. He began the day grumbling that it couldn’t possibly be a barbeque without charcoal. Only to perform a complete u-turn, declaring his need for a gas barbeque by the end of a mammoth cooking session. Hannah, our Volunteer Co-ordinator, learnt the correct way to tear a flatbread. Unfortunately, first she learnt that there was a wrong way to tear a flatbread and the quiet fury that this will unleash from otherwise mild mannered and polite men.

Fatima was astounded to find Syrian men cooking and serving food and was delighted and amazed to see Scotland’s positive influence on her countrymen. She also mentioned taking lots of photos as evidence claiming that no one was going to believe her.

People were so generous with their time and food, the salad table was a thing of beauty, well for a wee while at least. It didn’t look quite so pretty once everybody had descended and extensively sampled what was on offer. This was less of the limp lettuce and roughly chopped tomato and cucumber style of salad and more pomegranate and lentil salad and Mediterranean cous-cous, even the potato salad went above and beyond with the inclusion of pesto.

The youngest attendees of the barbeque didn’t appear to be overly impressed with the salad table, what is it that kids have against nutritious food? But there were several small people caught in wide eyed wonder when looking at the cakes and sweet treats on offer. Needless to say there were no leftovers from this area and I think it would be very unfair to say that this was all the fault of the children.

Taking the mad sugar rush out of the equation didn’t leave the children at a loss, with face painting, balloon modelling, storytelling and giant bubbles to play with. What was even more impressive was the incredibly high standard of each of these. Have you ever seen a balloon My Little Pony before? Or for that matter a bubble over 2 metres in diameter?

Whilst no adults appeared to brave enough to invoke the ire of the children by queueing for their own balloon animal or face painting they were very quick to join in with the bubbling and were well catered for with The Mini Parsonage, The Jimmy Hoo Ha’s, The Eriskay Ponies, Paul Tasker and Lucy Cathcart Frödén providing beautiful music to accompany our eating and socialising. Many acts performed beautiful songs inspired by plight of displaced people, with Lucy performing “Draw Me A City” which she wrote for the album Flight, a collection of original songs written in response to the ‘Letters fae the Locals’ that Refuweegee collects and passes onto recently arrived people.

Hundreds of letters fae the locals were written on the day but most importantly the garden was packed with smiling faces, laughter and a shared belief in our community. It wasn’t about fundraising or shaking collection buckets so it came as a bit of a surprise to count up the money from merchandise sales, the raffle and donations and find there was over £1,700 to bank. However, the decision was taken not to shout this from the rooftops. The Good Food, Good Mood barbeque wasn’t about fundraising, the fact that people were generous with their cash is secondary to what we want to publicise. People came together donating their time, food and skills and enjoyed spending an afternoon sharing this food and each other’s company regardless of where they came from, the colour of their skin or their religious beliefs. People made the Good Food, Good Mood barbecue and it was a perfect showcase of the Glasgow we are so proud to be a part of. Busy, diverse, friendly and fun.