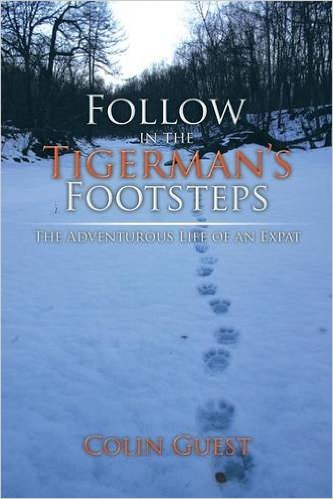 Colin Guest is an author and a serial expat. Having lived and worked in fifteen countries, including Iran, Saudi Arabia and Turkey, he has now compiled his extensive experience into a memoir which covers life in each place.The book begins with Colin’s first move abroad, to Iran. At the time he had a wife and a young family, and the move was not taken lightly. Something many expats who relocate abroad for work will understand is the difficult decisions that sometimes must be made. Colin speaks openly about why he chose to go abroad and how, for his family at the time, it was the best decision.

Working in the construction industry in various managerial roles, Colin’s first expat job was as a Section Foreman in Tehran. The opening chapter of Follow In The Tigerman’s Footsteps gives the reader an interesting look into what it was like to live in Tehran in a politically unstable period. Gradually throughout the chapter, Colin and his colleagues had to make various adjustments to living in an increasingly fractious city, moving from the centre of town to the outskirts when gunfire became a more prominent problem.

Another element that most expats will find relatable is the cultural gap that Colin describes. Moving to any country will encompass some kind of cultural difference, of course, but going from the UK to the Middle East – particularly during the period of time when Colin was there – perhaps serves to underline this even more.

As will be the case with any group of young men who work, eat and spend most of their time together, there were a lot of high jinks involved. Sometimes this caused problems in ways that they may not have initially expected. For example, two members of the group enjoyed dancing together after they’d had a few beers, but in Tehran, men were not allowed to dance with other men. In the first chapter, Colin is open about some of the cultural faux pas made by members of the group, and throughout the book there is the sense of a person who is gradually coming to understand the cultural nuances of the various places to which he moves.

From Tehran, Colin and the company he was working for moved to Qatar. Once again, the challenges presented themselves as soon as the group arrived: from not being able to take alcohol into the country past the customs officials, to cockroaches in the beds once they had reached their hotel rooms.

Follow In The Tigerman’s Footsteps adequately describes the stark differences between the lives of the expats and those of local people who were working on similar projects. In Iran, for example, some of the local workers slept outside on the ground, surrounded by cardboard until they were eventually given tents. In Qatar, the workers wore no shoes, although an amusing incident with some wellington boots demonstrated the explanation for this!

From Qatar, Colin went to Saudi Arabia, and then on through various countries in the Middle East, including a second Qatar trip some years later. Chapter nine describes Colin’s adventures in Algeria, his first post in Africa. From difficult managers to dead sheep on the roads, Algeria was evidently a bit of a challenge. However, the descriptions of the scenery are very interesting, particularly when the group decided to drive down to the canyon and around the site of the King Herald the Great hot springs, which are well below sea level. Likewise, Colin and his colleagues learned a bit about the history of the area, including a visit to the ancient ruined city of Timgad, which was built and inhabited by the Romans.

After the stint in Qatar, Colin found himself refurbishing the King of Jordan’s Raghadan Palace in Petra. Although he was only there for a relatively brief period, Colin’s descriptions of exploring the area, of driving along the Devil’s Highway, and of camping in the open air will almost certainly make you want to add a visit to Jordan to your bucket list.

Having now taken several jobs which required him to be away from his wife and family for extended periods of time – a situation with which many other expats will no doubt be able to empathise – Colin was finally offered a married status contract, meaning that his wife was able to join him on his next assignment in Turkey.

Colin’s stay in Turkey coincided with an interesting time in the life of Kemer, the town in which he was living. Much of the area was being developed, with old buildings being taken down and new ones being built in their place. Watching this happen anywhere is always an interesting experience, but in particular being able to view it from the eyes of an outsider must have been quite exciting.

Colin’s wife Jen quickly fell in love with Turkey, and they decided to buy a piece of land there and build their own house. They found a plot in a rural area surrounded by fruit trees, with views of the mountains. Luckily things went smoothly with the construction of the house and they were soon able to move in.

Another relatable incident happened while Colin and Jen were living in Turkey. Having injured his back, Colin needed to go to a hospital, but soon discovered that the quality of medical care was not the same as it is in the UK. Having driven around to two different hospitals, both of which were rejected by their friend Ahmed as not being good enough, Colin ended up in a private hospital and was then flown to the UK to complete his treatment. Having to fly abroad while you are injured is undoubtedly not the most positive of experiences, but it is one that must be taken into account when moving to a new country!

After living in Turkey for a couple of years, Chris, by now an accomplished country-hopper, moved to Cyprus and accepted a new contract there. Unfortunately all did not go quite as planned, and just three and a half months later, he found himself relocating again to Turkmenistan, then to Indonesia and Malaysia.

In Malaysia, Colin received a series of bad news from family back in the UK. As any expat who has spent an extended period of time abroad will know, one of the hardest things is being so far removed from family and friends as to be unable to quickly drop everything and rush to their side in an emergency. Ultimately, in the face of waves of bad news followed by financial difficulties, Colin decided to leave Malaysia, after which he relocated once again to the Philippines.

Another African chapter follows the Philippines adventure, with Colin living in Morocco and working as an Interior Finishing Advisor on a site roughly halfway between Casablanca and Rabat. His African adventure concludes the trips abroad, and brings the book to a close.

On the whole, I found Follow in the Tigerman’s Footsteps to be an interesting and eye-opening read. If you are considering a move abroad, and especially if you are relocating for work but leaving your family in your home country, Colin’s book will no doubt give you confidence. His wealth of experience of working throughout much of the Middle East and North Africa will be of great interest, particularly as these are regions that have been growing in popularity for work-based expat relocations over the past few years.

Colin encourages everyone to consider life abroad, and to understand that the norm of a 9-to-5 in one’s home country does not have to describe your own life. He ends the book with an exhortation to have a positive mindset rather than a negative one – a sentiment many of us would do well to follow.

Follow In The Tigerman's Footsteps is available to buy on Amazon, either as a paperback or an ebook. You can find out more and order your own copy here.