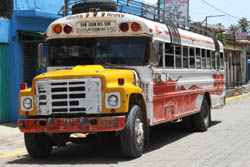 I had to go back to Granada this week to take care of some unfinished business. Getting there from San Juan Del Sur is an adventure in itself. There are only two options: hire a car for us$50 or take the Chicken Bus for us$2. Given that I’m on a strict budget at this time, I opted for the Chicken Bus.

My adventure began at 8am. It was relatively uneventful, except for the random stops to let people on or off. A Chicken Bus, unlike an express bus, will stop whenever someone wants to get on or off. It’s my only option for public transportation to Granada from San Juan Del Sur, because the only express bus from here goes to Managua.

We got to Rivas, the main city of the Province, in just under an hour. There I had to change buses.

The bus terminal in Rivas, if you can call it that, is located in the middle of the Mercado. Mercados are akin to open-air market places where one can buy anything from fruits and vegetables to knock-off watches and cheap electronics.I had an hour and a half before my connecting bus departed; a lot of time to waste in a place which offered nothing to fill it. If I had my iPod, I could have passed the time listening to music, but it was stolen a couple of months ago. So all I could do was people watch.

There are a lot of characters that populate the mercado. One in particular caught my attention. Here they call them maricons- where I’m from we call them effeminate gays. What caught my attention was not his mannerisms, it was his unending pursuit of people who wouldn’t give him the time of day. If someone ignored him, he became more aggressive. When he approached me, I said ‘Hola, como estas?’ He replied, ‘Bien, y tu? Quieres hacer algo conmigo?’ to which I replied, ‘gracias, pero no.’ With that he left.

I boarded my connecting bus and found a seat near the rear. While waiting, the parade of vendors selling food, drinks, watches, and dvds was endless. As one got off the bus, another one boarded. There was still 20 minutes before the bus departed, and there must have been a dozen vendors that passed through in that time.

Finally, we departed. It’s an hour and a half to Granada from Rivas, but it seemed like much more. Chicken Buses are old School Buses from the United States that have been given new lives as public transportation in Nicaragua. As such, the leg room leaves a lot to be desired. I stand just a hair under 6 feet tall, and the seats in these buses are meant for kids no taller than 5 feet. To say it was cramped is an understatement. Add to that, on Nicaraguan Chicken Buses there are no ‘maximum capacities’; the driver will keep stopping whenever some one flags him down. It’s often less than standing-room only.

I admit now that I don’t like crowds; they make me very nervous, very uncomfortable. I don’t like people pushing up against me. I need my space- at least an arms length around me. On a Chicken Bus that’s not going to happen. It wouldn’t have been so bad if I had a seat by the window, but I’m too tall to fit there, so I had to sit on the aisle. And of course, as is my luck, I got the displeasure of having not one but two obese travellers standing beside me, their bellies pushing into my shoulder and arm. And if that wasn’t enough, the boy sitting next to me fell asleep, his head falling onto my other shoulder!

We arrived in Granada at 12 noon. I quickly got off the bus and headed off to take care of business. I assumed that I could catch a 2pm bus back to Rivas, so I took my time running my errands. What I didn’t know is that the last direct bus to Rivas from Granada departed at 12:30pm.

At 1:30pm I made my way back to the bus terminal. Upon arrival, I searched for the Rivas bus. Unable to locate it, I feared that I had already missed it. Preparing myself for the thought of having to wait an hour and a half for the next bus, I took a seat at the ‘diner’ at the entrance to the terminal and ordered a coke. Diner is not really the proper term to use- it’s more like a tin-roofed shack with an outdoor grill.

I was sitting at a table near the entrance to the shack, sipping my cola and taking in the sights and sounds when two North American tourists, backpackers, entered the diner. They too were heading to Rivas and were seeking help finding the bus. That’s when I learned that there were no more buses to Rivas that day. We would have to take a bus to Nandaime and transfer to another bus to Rivas. That made me nervous; the last bus from Rivas to San Juan Del Sur was at 4pm; if I missed it, I would have to take a taxi which costs 3 times as much.

I boarded the bus to Nandaime along with the backpackers and a hoard of school children, vendors, and shoppers carrying bags of groceries. Many of these people live along the route to Nandaime and go into Granada to stock up on supplies, so the ride was going to be extra slow as we would stop thrice as often.

We departed Granada at 2:15pm. I was doing the math in my head—it’s an hour to Nandaime and 45 minutes from Nandaime bus terminal to Rivas. If I was going to catch the last bus to San Juan Del Sur, my transfer of buses would have to be fast! I was nervous about the time, but for once, luck was on my side!

When we approach the entrance to Mombachu Volcanic Park, where the highway to Rivas meets the highway to Jinotepe, there was a Managua to Rivas express bus waiting. Our driver pulled in behind it at the side of the road, and all of us heading to Rivas changed buses. I wasn’t going to miss my bus to San Juan Del Sur after all!

5km from where we boarded this second bus, the driver was pulled over by the Federal Police. I was in the back of the bus, so I couldn’t hear what was going on, but I could see in the rear-view mirror that it wasn’t just a routine stop; the driver’s arms were flailing, he was getting animated and angry. 5 minutes into the discussion, the driver got up out of his seat and exited the bus. He was gone for almost 10 minutes; it was going to be close in Rivas!

We started off again. 2km farther down the road, the driver decided to pull into a gas station. He didn’t need gas, he needed to use the bathroom!!! So much for the ‘express’ in the term ‘express bus’. Now I was getting anxious!

As we pulled into the terminal in Rivas, my bus to San Juan Del Sur was pulling out. I jumped off the bus and made a mad dash through the terminal, weaving my way through the vendors and waiting passengers to the other side. This wasn’t easy, not just because of all the people I had to get passed, but because I’m still recuperating from an accident I had a few weeks before- the week before I moved from Granada to San Juan Del Sur, I was hit by a horse-drawn carriage while riding my bicycle. I suffered bruised ribs, a gash in my forehead, cuts on my knees, and a deep cut and sprain on my arm where the carriage wheel rode over me. Needless to say, every step I took hurt!

Just as the bus to San Juan Del Sur was exiting the terminal, I caught up to it. One of the boys that works on the bus handling cargo saw me and opened the rear door. I climbed on and took a seat on some bags of rice as this bus too was standing room only. Sitting on the rice was actually the most comfortable I’ve been riding on a Chicken Bus!!!

Finally, we reached my destination. 9 hours after first departing San Juan Del Sur, 7 of which were in transit, I was back home!

Paul Schlindwein is a freelance photojournalist living in San Juan Del Sur, Nicaragua. He has worked for such news outlets as CNN, NBC, BBC and CBC Canada, and continues to cover news and feature stories for these agencies in Central and South America. Prior to coming to Nicaragua, Paul lived for 6 and ½ years in Buenos Aires, Argentina.