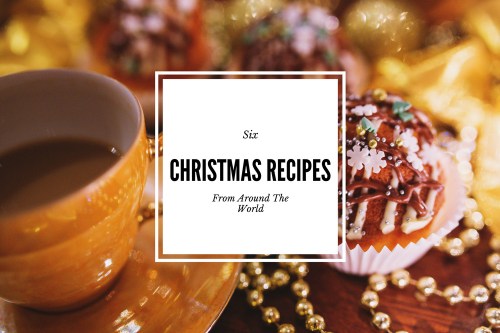 Every culture has its own unique way of celebrating the holidays. Christmas, in particular, is celebrated by countries across the globe. It is the time for family, friends and festive cheer. Food also plays an important role in Christmas celebrations. If you’re hosting a Christmas party and want to impress your guests, why not take inspiration from around the world and serve up some culturally diverse fare.From the traditional Finnish baked ham to Puerto Rican eggnog, here are five Christmas recipes to make your holiday party extra special.

Known as Laufabrauð in Iceland, this is a traditional dish that is mostly eaten at Christmas time. It is a crisp flatbread that families start preparing a few days before Christmas. The bread is first cut into detailed geometric patterns and then deep-fried. It is served as an accompaniment to Christmas dinner. There is even a special tool to cut the patterns, known as a leaf bread iron. If you don’t have one, you can use a paring knife.

Directions
Add the flour, baking powder, sugar and salt in a bowl and whisk. Add the butter and cut it into the flour mixture using your fingers or a fork until crumbly.

Heat the milk (do not boil), and stir it to form the dough. Place the dough onto a lightly floured flat surface and knead until it becomes smooth.

Break the dough into small balls and taking one ball at a time, roll it out into a disc shape, of 1/16th thickness. To keep the rest of the dough from drying out, cover it with a damp towel.

Using the leaf bread iron or a paring knife, cut rows of nested V’s working outwards from the center. The V’s should be about a quarter inch apart. Lift the tip of every other V with the knife and fold each one back to cross over the V behind it. Press the dough gently into place.

Place the dough discs between parchment paper and cover with a damp towel until they are ready for frying. Heat oil in a saucepan and fry one disc at a time, turning them over, until crisp on both sides. Place them on paper towels to drain the oil.

When they cool, decorate with powdered sugar if desired. Store the leaf bread in an airtight container and keep in a cool place until ready to serve.

This dish is the ultimate comfort food for those wintery days. This traditional Mexican recipe is a perfect meal with which to begin the Christmas season. Many families make it in large amounts and then invite family and friends over for a kind of feast. You can even make smaller batches, but preparing larger amounts makes sense due to the long cooking time. Posole or pozole is also often served on Christmas Eve and in some parts of the country, on Thursdays and Saturdays throughout the year. Pork posole and corn bread stew is a humble dish, but one that is packed with flavor. The hominy (coarsely ground corn used to make grits) is the star of the dish as it adds a delicious chewy texture.

Directions
Add salt and pepper to the pork. Heat the oil in a large skillet and cook the pork for five minutes over medium-high heat. Stir often until browned and transfer to slow cooker.

Cut the carrots into quarter inch pieces and along with onions add to the skillet with salt and pepper. Cook for five minutes and then add the flour, chili powder, minced garlic and oregano.

Cover and cook for 4 ½ hours on high, and for 6 ½ hours on low. With an hour of cooking time left, stir in the eggs, corn muffin mix, 1 teaspoon cilantro and quarter cup of water.

Add the hominy, lime juice and two tablespoons of cilantro. Add the corn muffin mixture on top and place a cotton dishtowel over the cooker bowl and close the lid on top. Cook for the remainder of the time or until the top is firm.

Lebkuchen, or Pfefferkuchen, is a traditional German baked treat. It is similar to gingerbread. Lebkuchen is easy to make and is served during Christmas. The cookies are deeply spiced and since this recipe calls for honey, they take on a soft, chewy texture.

Directions
To make the candied fruit, add the sugar and water in a saucepan. Heat over medium-high flame and stir until the sugar is completely dissolved and the syrup comes to a boil.

Add the orange and lemon slices and cook for ten minutes. Remove from heat and drain.

Chop the drained fruit after discarding the seeds and set aside.

To make the fruit mixture, add ½ cup of the candied citrus to the dried fruit and set aside.

In a mixer bowl, use a paddle attachment to beat together the butter, honey and brown sugar for five minutes. Add the eggs one at a time and mix in the dry ingredients until blended.

Add the fruit mixture and fold into the mixture, until just blended. Cover the dough in a plastic film and roll out to form a half-inch thick disc. Keep in the refrigerator for an hour.

Next, preheat the oven. Place the unwrapped dough between a couple of sheets of parchment paper and roll out into a half inch thick disc.

Take off the top layer of parchment paper and using a cookie cutter, cut out the cookies and transfer to a baking sheet lined with parchment paper. Bake for twenty minutes, rotating them once halfway through baking.

Place on to racks and allow them to cool. Sift the confectioners’ sugar onto the cooled cookies and serve.

A Christmas ham, baked ham or Yule ham is a traditional Finnish specialty. The tradition of having a baked ham as part of the Christmas meal dates back to when the Germanic peoples used to pay it as a tribute to the god known in Germanic paganism as Freyr, who was associated with boars, harvest and fertility.

Directions
Place the ham in a roasting pan on a wire grid. The ham should be skin side up. Press a roasting thermometer into the ham, at the place where it’s the thickest, ensuring that it does not touch the bone. Put the ham in the oven. When the roasting thermometer reads 170 °F (77°C), it means that the meat is cooked. Take it out of the oven and allow it to stand for a bit. Remove the skin and trim the underlying fat as desired.

For the coating, mix all the ingredients together and apply over the ham. Place it back into the oven at 440 °F (225°C) until it turns golden brown. Add cloves to decorate the surface of the ham.

There is a variation of this recipe in which the meat is covered with a pastry crust that keeps the juices in. You can make the pastry by adding two cups of rye flour into a liter of water. Roll the dough and pat over the ham surface. This should give you a crust of about ½ inch. It’s not required to add salt to the pastry, because if the ham gets too salty, the crust will absorb some of the excess. The juices left behind in the roasting pan can be used to make flavorsome gravy. Many families prepare a gravy with some apple sauce flavor, ground ginger and mustard, which goes well with the warm ham.

Coquito is a coconut-based drink that is traditionally served in Puerto Rico. In fact, it is a Puerto Rican eggnog that is popular during Christmas and New Year’s Eve celebrations. It is an alcoholic beverage made with coconut milk, sweet condensed milk, rum, vanilla, cloves and cinnamon. This rich, creamy drink is usually served along with other holiday specialty dishes and desserts. It is meant to be shared by family and friends and is served cold on Christmas.

Directions
In a bowl or blender, mix the coconut milk, sweetened condensed milk and lightly beaten egg yolks. Blend on high for a couple of minutes until the ingredients combine well. Pour into glass bottles, cover and place in the refrigerator until chilled. To serve, stir or shake the bottles to combine well and pour into small serving glasses. Sprinkle the ground cinnamon and add cinnamon sticks for garnish.

Named after a famous Russian ballet dancer, the recipe actually comes from down under, and is a popular Christmas treat in Australia and New Zealand.

Directions
Preheat the oven to 250 degrees. Take a baking sheet and line with baking parchment paper. Trace a 7 inch circle on the paper and flip it.

Take ¾ cup of the sugar, cornstarch and salt and combine in a mixing bowl. Set aside.

Beat the egg whites and cream of tartar until they form soft peaks. Increase the speed and add the sugar mixture, a tablespoon at a time. Add the vanilla and beat until the mixture turns glossy.

Place the egg and sugar mixture on the parchment paper and spread it within the circle, with a slight dip in the middle.

Turn off the oven and with the door slightly open, cool it inside for an hour.

As it cools, prepare the raspberry sauce by combining 1 cup of the raspberries, the remaining sugar and a tablespoon of water. Place over medium heat. When it comes to a simmer, cook for 3 minutes until the sugar is completely dissolved. Add the remaining raspberries and allow to cool.

Take the pavlova onto a plate and pour the raspberry sauce in the center. The pavlova can be further garnished with mint leaves and whipped cream.

What’s your favourite Christmas recipe? Let us know in the comments!