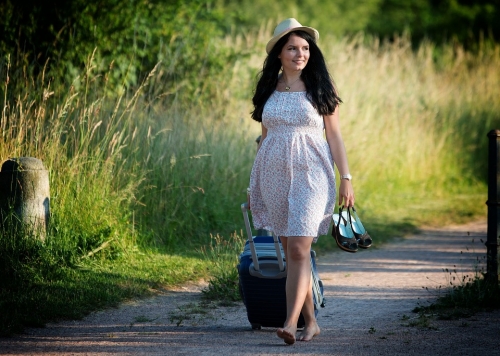 Women make up approximately 50 per cent of the global population and yet do not receive the same percentage of the opportunities. While there is no perfect haven of safety, social and professional equality, and health for women across the globe, there are many countries where women can live and be treated with a large degree of respect.

There are a number of gender-specific criteria to consider while choosing a country to move to as an expat.These criteria may include government mandated maternity leave, a high score on the OECD’s Better Life Index, physical safety, the number of women in governmental positions, and the lack of a glass ceiling in the workplace.

According to the World Economic Forum’s Global Gender Gap report for 2015, the Nordic states of Iceland, Norway, Finland, and Sweden are the four best places for women to live, and have been since the inception of the report.

Iceland has maintained its top ranking for five years in a row and has a score of 0.881 out of a highest possible score of 1 (indicating complete gender equality). This score means that women in Iceland enjoy the most equal access to education and healthcare and have the best chance of being elected to positions of power and responsibility in the government. The Icelandic government has taken the lead in gender initiatives and was one of the first countries in the world to ban strip clubs on feminist principles rather than for religious reasons. In 2010, it was also the first country to have an openly gay female prime minister.

Norway’s score on the Global Gender Gap report is 0.850, and it was the first country in the world to pass a law on gender equality way back in the 1970s! The country has the highest women-to-men earnings ratio in the world at 77 per cent, and has quotas to ensure female representation in government. Additionally, Norway also has some of the best childcare policies globally, and mandates twelve weeks of parental leave and access to the best state-run nurseries for all citizens.

Finland has gender equality written into its constitution and has four separate governmental bodies working to ensure that gender equality is upheld to the best possible levels. 72 per cent of women in Sweden are employed, and Swedish the policy on parental leave for both men and women is very flexible, so that men can be fully involved in the raising of their children.

The fifth Nordic state, Denmark, though not in the top 10 best countries this year, was the only country in 2014 where, on average, women earned more than men.

However, there are other countries apart from the Nordic states that provide women with an environment of equality and access. Here’s a list of some of the best places for a woman to move to.

A 2012 Gallup survey found that Rwanda placed second on a list of countries where women felt safe walking out at night by themselves. This is largely due to the efforts made by the Rwandan government in recent years to ensure women’s rights. Rwanda has a very large number of women in office – perhaps the highest percentage in the world. After the genocide ended in 1994, the population was 70 per cent female and the incumbent government put a number of policies in place to boost women’s roles in public life. The constitution mandates that at least thirty percent of the seats in the parliament and the cabinet should be occupied by women. There is also a good deal of women’s participation on the economic front, and there isn’t very much disparity between male and female incomes. 43 percent of Rwandan firms have female participation in ownership. As far healthcare and educational opportunities are concerned, Rwandan men are still more privileged, but with the rapid strides Rwanda has made in the last 20 years, it seems only a matter of time before this changes too.

In terms of economic growth, Rwanda has made significant strides to stabilize and bring its economy back to pre-1994 levels. Since 2003, the average annual GDP growth has been between 7 and 8 percent, and inflation has been reduced to under 5 percent since 2013. The fiscal policy has focused on eradicating poverty by providing better infrastructure and education to the people. The Rwandan government is also trying to become a regional technological and IT hub, seeking to move beyond its traditional industries of tourism, minerals, tea and coffee. All in all, Rwanda, with its pro-female policies, emerging economy, great weather, fantastic culture and food, is a great place for women to consider moving to.

The same Gallup survey that placed Rwanda in second place in 2012 placed this Asian island nation in third place for women’s safety. The government has taken many measures to ensure that women’s rights are protected. In 2014, Singapore was ranked tenth in a list of countries where women were paid as much as men for doing similar work, and this has improved in 2015. According to 2014 labour force statistics, female employment was the highest it had it ever been – 76 per cent for the prime working ages of 25 to 54. The country now has a greater number of senior officials, technical workers, and managers in the system.

In previous years, political representation was an area in which Singapore needed improvement, but there were a larger number of women legislators in 2015, with women holding important positions in the prime minister’s office. In the 2015 Gender Gap report, it was ranked first in the region for an increase in the economic participation and opportunity score. Incidentally, Singapore is one of the few countries in the world where women did not have to fight for suffrage – they have been able to vote since the inception of democracy in Singapore.

Singapore is a thriving, multicultural hub, with an active nightlife scene, that caters to many different kinds of people. There are a number of expat communities here, and the locals are friendly and inclusive. The quality of healthcare is world-class and all major illnesses can be treated here. As far as education is concerned, there are a number of great public and private schools for one to choose from that provide a global quality education. Additionally, the crime rate on the island is very low (due in no small measure to the initiatives taken by the government and their watchfulness), and activities like drug trafficking have a no-tolerance policy from the government.

For a while now, the Philippines has been the most equal country in Asia for women. This is due in no small measure to the almost fully closed gaps between men and women in terms of education and healthcare. Women have enjoyed a high level of economic participation and have also held important political positions here, including the presidential office. Megawati Sukarnoputri was first vice-president during Abdurrahman Wahid’s presidency, and then served as the president from July 2001 to October 2004. In 2015, the Philippines saw an increase in its economic participation score on the Gender Gap report. The country has many women in positions of authority, and has seen improvements in political empowerment as well, with more female ministers.

There are a number of other reasons why the Philippines is a great place to move to. It is the second-largest archipelago in the world and has great weather year-round. There is a lot of diversity in the culture and the landscape of the country, balancing urban areas with natural beauty. Its capital, Manila, is a thriving centre of commerce and is also the political seat of power, complete with historical landmarks and educational institutions. Manila is also one of busiest seaports in the world, making the Philippines a major import and export hub. The healthcare services in the Philippines are usually of a global standard. Another major plus of living here is the ease with which one can travel around South East Asia.

New Zealand comes from a long and rich tradition of being a great place for women – this was the first country to allow women’s suffrage, as far back as 1893. As a matter of fact, in the year 2000, the five most important positions in the government – the head of state (the Queen), the Governor, the Prime Minister, the Speaker of the Parliament, and the President of the Supreme Court – were all held by women! Women in New Zealand have most of the same healthcare opportunities afforded to men, and the gender gap in the educational sphere has closed completely.

New Zealand has recorded a higher degree of female economic and political participation in the past year. Additionally, in 2013, Economist magazine created an index charting gender equality at work where New Zealand was ranked first. 68 per cent of the women in New Zealand have jobs, and the average wage gap between men and women is only about 5.6 percent. New Zealand also has a high score on the Better Life Index compiled by the OECD. New Zealanders rated their general satisfaction with life at 7.3 out of 10, which was higher than the OECD average rating of 6.6.

Additionally, New Zealand has a wonderful landscape, and it is much easier to enjoy an active outdoor lifestyle here. You can have your pick of the beach, mountains, forests, rivers, and fjords. The climate is temperate, and while there are days when it will be overcast and gloomy, you generally have warm and dry summers with mild winters. Children here have very easy access to quality education and score ahead of similarly-aged children in other developed countries for subjects such as maths and science. It is also worth noting that most of New Zealand’s best schools are state-run and are free. The economy survived the downturn relatively well and good jobs across sectors are quite easily available.

Rising three places to 5th on the Gender Gap report, right behind the Nordic states, Ireland has made significant improvements in the political and economic spheres in recent years. The gap between men and women as far as educational and healthcare access goes is almost fully closed. Life expectancy for women is also much higher than it is for men. Ireland scores very well on the political empowerment index – the country elected a female head of state, Mary Robinson, way back in 1990, and at the end of her term, elected the second female head of state, Mary McAleese.

After the general elections in 2011, 15.1 per cent of the elected members of the parliament were women, and they accounted for a little over a third of the composition of individual state boards. Wage equality is Ireland is improving, as is the estimated earned income. Ireland has also added a number of female professional and technical workers into the system.

Ireland is a country with a lot to offer in terms of a rich culture, gorgeous landscape, and a lively and welcoming local population. Ireland also has great proximity to the rest of Europe and is an ideal gateway for you to explore the continent with your family, allowing you to take advantage of millennia of fascinating cultural history. Ireland also has a great system of annual leave – you are entitled to at least 20 days of leave in the year, regardless of what county you work in. It is also a safe place to bring up your children, and in particular, there is much less gun crime in Ireland than in a country like the US. It is illegal to own a gun in Ireland unless you own a farm. Healthcare is also very accessible in Ireland, with state-funded healthcare for everyone, although you can always choose private healthcare as well.