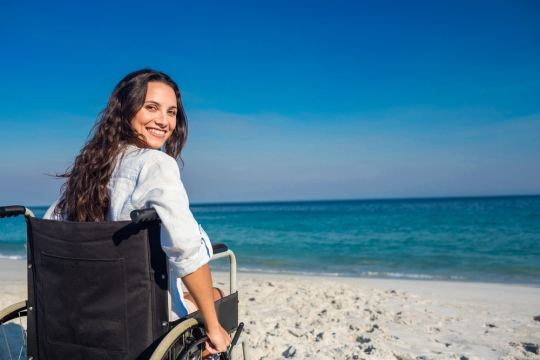 As any wheelchair user will know, planning a trip to a new destination, whether for pleasure or business, requires some research and planning to ensure that getting around and enjoying life in a new country isn’t a logistical nightmare. Dropped curbs, plenty of accessible toilets, a good choice of accessible housing and accommodation, accessible restaurants and venues as well as a transport system designed with wheelchair users in mind are all extremely important factors when planning a move abroad.The experience begins at the airport. International airports aim to offer travellers with reduced mobility a barrier free passage throughout their experience. Travellers can expect assistance from designated staff to give expedited passage through check-in, security and passport control. However, once you’ve left the airport, what can you expect from your destination?

As a general rule of thumb, the more modern and developed the country, the more accessible the larger towns and cities are likely to be. Dubai, Singapore, Tokyo, Berlin, New York and Sydney are all great examples of modern cities where the needs of differently abled residents and visitors have been taken into consideration. However, ancient cities such as Rome and Barcelona have also come a long way in catering for wheelchair users. The recognition that a large proportion of the population has mobility issues encourages cities in their accessible urban development. If there are lots of visitors, then there is a need to cater for the less mobile; the more accessible a city is, the more visitors it will receive!

However, although the larger cities in urban areas in many countries will offer good wheelchair accessibility, this doesn’t necessarily mean that the country as a whole is straightforward to navigate in a wheelchair.

In 2016, the UN released a report on the good practices of accessible urban development and although, as the title suggests, the report is focused on urban areas, it is a good indicator of where countries demonstrate good practice and a commitment to developing barrier-free access for all. The report highlights the economic benefits to a country for improving the infrastructure in order to meet the needs of differently abled residents and visitors. Encouragingly, 165 states committed to improving accessibility for all, and the report gives examples of good practice and developmental projects from countries including Singapore, China, Hong Kong, Malaysia, Mexico, United States, Canada, United Kingdom, Italy, Indonesia, South Africa, Denmark, France, Spain and Ethiopia.

The report predicts that by 2050, some 900 million people with disabilities will be living in urban areas. There are forward thinking countries such as Singapore, where the percentage of accessible government buildings is now almost 100 percent. In addition, up to 90 percent of the buildings along Singapore’s most famous shopping street, Orchard Road, are now more accessible. The entire 48.9km of pedestrian network in Kuala Lumpur, Malaysia has been redeveloped with accessibility in mind.

The EU presents the annual Access City Award. Previous winners include Chester in the UK, Milan in Italy, Borås in Sweden and Berlin in Germany, with many large as well as smaller, lesser-known cities receiving runner up or special mention prizes. The award ‘recognises and celebrates a city’s willingness, capability and efforts to ensure accessibility’.

The best insight into the accessibility of a country comes from people who live there or who have travelled there themselves. There are many blogs written by wheelchair users and people with limited mobility to help travellers understand what to expect when travelling or moving to a new country or city.

It is highly unlikely that you will be the first and only person with a disability to travel to or live in a destination. Other people who have been through the process of researching locations and who have then made the leap to a life in a new country are often happy to share their experiences. Accessibility blog Spin the Globe writes about 11 countries you wouldn’t expect to be wheelchair friendly and gives great examples of how a wide range of destinations including Israel, Morocco, Barbados and Slovenia have been enjoyed by wheelchair users on their travels.

Curb Free with Cory Lee is a regularly updated blog in which the writer shares his view of the world from a wheelchair user’s perspective. There are posts and information about a wide range of countries and destinations in Europe, America, Africa and the Philippines which cover his experiences, both positive and negative.

The Accessible Travel Forum joins travellers from around the world to share their experiences and discuss many of the common questions you may have when considering a move abroad. The same can be said of Trip Advisor’s Travelling with a Disability forums, where there are a huge range of destinations and accessibility-needs discussed.

There is also a lot to be said for having a look on Google Street View when considering a move. Nina, a wheelchair user from the UK, describes how she wanted to check out the hotel location on Street View when planning a trip to Tokyo.

“I clicked on the map and was delighted to see a man in a powered chair in front of the hotel. The Google Street View car had obviously followed him some way down the road, so I was able to see that the curbs were dropped. He was dressed in a business suit and was alone in his powered chair, which showed me it was obviously possible to travel independently in a wheelchair around the city.”

Checking out dropped curbs on Street View is a quick and easy way to give yourself some peace of mind about the accessibility of a town or city. Google Maps has also recently added a wheelchair accessible option to their route finder in some of the major cities of the world.

There is no doubt that considering a move abroad as a wheelchair user brings its own set of challenges and uncertainties. However, there is a global awareness and recognition of the need to provide people with limited mobility with access to accessible transport, accommodation, leisure venues and activities, and for many, most importantly, toilets! The power of the ‘purple pound/euro/dollar’ (the spending power of people with disabilities) is increasingly being recognised for its importance to the economy of a country, and there are global efforts to ensure that differently abled residents and visitors can enjoy a barrier free life in both modern and ancient destinations in countries all around the world.