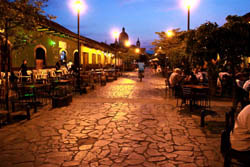 Nicaragua is witnessing an economic recovery in a large part due to increased tourism. Granada, located on the northern shore of Lake Nicaragua, is at the center of that revival.

Founded in 1524, Granada is recognized as the oldest European city in the Americas. It boast the best example of preserved Spanish colonial architecture in Nicaragua, and its proximity to the lake, volcanoes, and wilderness areas attracts tens of thousands of tourists annually.

Calle La Calzada stretches from the central park of Granada to the shore of Lake Nicaragua. It is lined with restaurants, bars, hotels and tour operators. On any given night, one will find the outdoor tables filled with tourists and locals alike.

Sharing the street with these night time revelers are artisans and canasteros- young people selling cigarettes and gum from baskets they carry.As well, street kids wander among the tables begging for money, and prostitutes parade around looking for dates with lonely tourists.

“It’s heartbreaking, but I’m torn. I’ve read tourist books that say not to give them money because it teaches them the wrong lesson.” Jay White has been vacationing in Granada for two months. He says that the street kids are a symptom of a more serious problem. “I’ll give them money, but only if they provide me with a service like shining my shoes or getting me something from the pulperia.”

The canastas [baskets] of cigarettes and gum that Carlos carries costs him 35 cordobas each night. Of what he sells he gets to keep 10%, the rest going to the man that rents him the canasta. 35 cordobas is a lot of money for Carlos, so he splits the cost of the canasta with two others.

Carlos’s parents divorced when he was 12 years old. His mother and sister remained in their home in Managua, while Carlos and his father moved to Granada. They lived in a small one room shack near the lake which doubled as his father’s electronics repair shop. For 6 years they shared the single bed until Carlos’s father found a girlfriend and kicked him out. He’s been on the street since then.

His story is not unique; there are scores of homeless sleeping in parks, in doorways, and in the abandoned buildings of Granada. Most are young people ranging from 13 to 25 years of age. Some are drug users, but the majority are runaways or otherwise abandoned by their families.

Meanwhile, the bars and restaurants stay filled with tourists and residents spending the night out with friends and family, seemingly oblivious to the plight of these young people. With a wave of a hand, they brush aside the constant flow of beggars. Waiters and security people stand ominously along the perimeter of the diners discouraging these desperate people from disturbing their customers.

Tom O’Shea owns one of the most popular bars on La Calzada, O’Shea’s Irish Pub. “Over the last four and a half years that I’ve been here, it has gotten better, but there is a long way to go. It’s a serious problem. I’ve seen mothers sitting on the sideline while their children go and beg for money. It’s a business for them. I have to hire security just to keep them away from my customers.”

Tom went so far as to print an advisory for his customers on the first page of his menu asking that they don’t patronize the beggars that come to the tables. “One day a woman came into the bar asking for change to give to one of the street kids. I asked her if she read the first page of the menu. She told me ‘no’. I showed it to her, she thanked me, and kept her money.”

Tom wants to see more police on the street to keep the street kids away, but in a country where there are only 18 officers for every 10,000 people, that is not likely.

With such a prevalence of extreme poverty, one would think that Nicaragua is a dangerous place to visit. After all, sociologists are always quick to link poverty with crime. But that is not the case in Nicaragua. According to the United Nations and other monitoring organizations, Nicaragua is the SAFEST country for travelers in all of Latin America.

Efforts are being made to alleviate the poverty and assist those living on the street. NGOs provide most of the resources for those on the margins of society. Some provide food and shelter to the ones who have already left their homes; others, like Empowerment International, deal directly with families on the edge to prevent their children from ending up on the streets.

Kathy Adams founded Empowerment International in 1998 while working as an engineer for Intel in Costa Rica. Soon after, it expanded to Nicaragua as well.

EI works with families in the poorest barrios of Granada. Their volunteers make daily home visits to encourage parents to send their children to school. They provide counseling to help them overcome barriers, physical or otherwise, that may prevent their children from attending class, and they train the parents in how to enhance their children’s educational experience.

Most of the families that Empowerment International works with live on less that $2/day. For them education is not a priority. Though most children enter the school system, many leave early to help their families financially. For the families, the long-term benefits of education hold much less value than the short-term financial benefits of children working to add to the family income.
EI has many success stories, but even so, the lure of easy money at the hands of caring tourists keep the kids coming back to La Calzada. “The saddest thing,” says Jay White, “is that they are smart but con artists. They speak English and know how to outsmart the Gringos. It’s a waste of their potential.”

Paul Schlindwein is a freelance photojournalist living in San Juan Del Sur, Nicaragua. He has worked for such news outlets as CNN, NBC, BBC and CBC Canada, and continues to cover news and feature stories for these agencies in Central and South America. Prior to coming to Nicaragua, Paul lived for 6 and ½ years in Buenos Aires, Argentina.