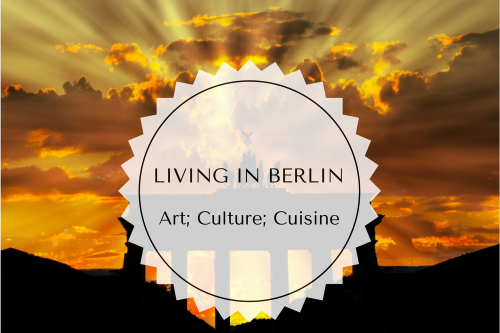 Germany is the geographical, economic and political heart of Europe. With a population of over 81 million, it is the second most populous nation in the region. Its robust economy is the fifth largest in the world. Germany’s influence can be seen in the countries that surround its territory. But the same countries have also impacted Germany in different ways. Berlin is the country’s cosmopolitan capital city.It has a significant expat population, with over a third of its population coming from other parts of the world. For this reason, foreigners find it easy to make the city their home. Since there is much to explore in this exciting city, here’s a newbie’s guide to living in Berlin.

Berlin has over 450 art galleries and is among the world’s largest producers of contemporary art. Its art galleries feature many world-renowned collections. Berlin is on the cutting edge of the global art scene and is home to around 10,000 international artists producing and showcasing their art in the city. The availability of space and the relatively low cost of living in Berlin draws emerging artists from different parts of the world. Some of the big names that can be spotted in its many art galleries include Anselm Kiefer, Nam June Paik and Gerhard Richter. New art spaces are constantly appearing across the city. Berlin’s art galleries are known to challenge and entertain visitors. The following are some of the top art spaces in the city.

The C/O Gallery, in the old royal post office, places the focus on photography. The gallery supports young emerging artists as well as some of the most influential names in the field such as Peter Lindbergh and Annie Leibovitz. It also conducts workshops and events. The C/O Gallery spans an expanse of over 2000 sq. meters, but still retains a warm atmosphere.

Berlinische Galerie is a favorite among artists. Previously a glass warehouse, the gallery features a steady stream of exhibitions. It has also housed an impressive permanent collection of art by local artists since 1870.

The erstwhile main train station harbors the Hamburger Bahnhof, a gallery with wooden floors, white walls and plenty of skylights. Berlin entrepreneur Dr. Erich Marx owns the main collection, which includes art from Lichtenstein and Warhol. There is also a permanent collection at the National Gallery. Also noteworthy is the Marzona collection, which features some great examples of conceptual and minimal art.

The curator of the Pool Gallery is the artist and musician Ruby Anemic. The exhibitions held here are fresh and full of youthful spirit and range from light installations and paintings to graphic design and photography. Artists such as Benjy Russell and Henrik Vibskov have shown their work at this gallery.

There’s an aura of secrecy shrouding the Sammlung Boros Collection. Visitors can enter only on the weekends, and by appointment. Built in a WWII bunker, the gallery features a large contemporary modern art collection. There are currently 159 international artworks on display, ranging from sculpture to video.

The Me Collectors Room showcases the extensive private collection of Thomas Olbricht, an art collector, endocrinologist and chemist, who amassed the pieces over 25 years. The collection is diverse in terms of genres, periods and media. There is also a selection of skulls, taxidermy and tribal pieces.

“A laboratory for communicating and advancing contemporary cultural developments in Germany”, is what the KW Institute for Contemporary Art calls itself. It has a comprehensive artistic program including exhibitions, workshops, screenings and onsite artist studios. The institute launched the Berlin Biennale in 1996, one of the city’s most important art events. There is a lot to explore in this four-storied art space, and visitors can also enjoy a drink afterward.

Galerie Open was created in 2008 and represents up and coming, young contemporary artists mainly from Berlin and New York. It features three levels of a variety of contemporary art pieces that change with each new exhibition. A visit to Galerie Open in summer will enable you to view an interesting selection of emerging artists, as this is when the owner Alexandra Rockelmann passes the gallery space on to a young curator.

A significant art gallery in Berlin, the Carlier Gebauer, was founded in 1991. Featuring established as well as emerging artists, it is located in the gallery district in the Kochstrasse area. With almost 600 sq. meters divided across three ‘white box’ rooms, the gallery can hold three solo exhibits simultaneously.

Johann König serves as a sort of link between Berlin’s gallery district and the Neue Nationalgalerie. A white-walled space, the gallery showcases a range of contemporary media, ranging from sculpture to multimedia installations.

German is the official language in the country and also the most widely spoken native language in the EU. Expats will find that German is actually quite similar to English since English has Germanic roots. Berlin and the whole of Germany have contributed greatly to local as well as global culture. German cuisine is world renowned, and German food such as sausages, desserts and beer are hugely popular across the globe. German culture also holds sports in high regard. The country has been the host of the Olympics thrice. The country’s national sport is soccer, and Germany has become the best national team in the world, having won the most recent World Cup.

Culture buffs will find many places of interest in Berlin. The Brandenburg Gate is one such attraction. It is the most defining monument of the city. Built for King Frederick Wilhelm II in 1791, the monument rises to a height of 26 meters. Located at Pariser Platz in the Mitte district, the sandstone Brandenburg Gate was the first neoclassical structure in Berlin. Highlights of this monument include the four-horse chariot and six large columns on either side. The columns form passageways which are used by traffic. The center passage is reserved for royalty. Some of the notable personalities that have walked through the gate range from Napoleon to John F. Kennedy, and more recently, Barack Obama. In 1999, the gate was the site of a commemoration of the tearing down of the Berlin Wall, when the German Chancellor, Angela Merkel, and then President of the Soviet Union, Mikhail Gorbachev, walked through the gate.

Another significant part of Berlin culture is the iconic Berlin Wall memorial. The Berlin Wall’s history started in 1961 when the eastern part of the city was sealed off to curb the influx of refugees from east to west. The four-meter-high wall extended for 155 kilometers and had 293 observation towers. It was torn down in 1989 and the remnants of the wall have been turned into a memorial, one that serves as a reminder of the hostility that once divided the European region. A highlight of the wall is Checkpoint Charlie, one of the most iconic and perhaps notorious crossing points connecting the two halves of the country during the Cold War. Today, it is an open-air exhibit.

The Museum Island in Berlin is a UNESCO World Heritage Site, one of three such sites. It is the home of the country’s most important museums: the Altes Museum, the Neues Museum, the Alte Nationalgalerie, the Bode Museum and the Pergamon Museum. At the Pergamon Museum, visitors have the opportunity to view the remnants of the Ishtar Gate, a monument that was once one of the Seven Wonders of the World.

Berlin’s multiculturalism is apparent in the Karneval der Kulturen, an annual carnival. The event takes place against the backdrop of the city’s melting pot identity. Berlin has the highest number of foreigners of all the German cities and the Werkstatt der Kulturen, the organizers of the carnival, perceive Berlin as a meeting ground and a place for dialogue for people of varied cultural backgrounds. The Karneval der Kulturen attracts nearly 1.5 million visitors each year.

Another important cultural event that takes place in Berlin is Christopher Street Day, which began in 1979. Held at the end of June annually, it serves as an LGBT celebration and demonstration against discrimination.

Berlin’s nightlife is one of the most vibrant in Europe. Many historic buildings in the former city center of the eastern part of Berlin, Mitte, became a thriving place for underground and counterculture events. Mitte and its surrounding areas are home to a number of nightclubs. Berlin is known for parties that extend for hours into the night and well into the morning since clubs do not have to shut at a fixed time over the weekends.

German cuisine is rich and hearty. Different regions of the country have their own traditional recipes. Pork is an important component of German cuisine and is the most consumed meat. Dishes such as Schweinshaxe (braised pork hock) and Saumagen (pork stomach) are traditional recipes with pork as the main component. Another popular German food is Bratwurst, a type of sausage. Other commonly used ingredients in German cuisine are beets, turnips and cabbage. Potatoes and sauerkraut are also important parts of meals. The most popular alcoholic beverage in Germany is beer. Germany is where many varieties of beer originated, including Pilsner and Alt. The country is also known for its weizenbier or wheat beers. The beers are produced in accordance with the Purity Law or Reinheitsgebot, which states that beer can only be made from barley, hops and water. Other popular alcoholic beverages in Germany include brandy and schnapps.

Berlin has a variety of eateries where you can find traditional eats. Here’s a guide to some of the must-try dishes in the city.

One of the most popular dishes to eat in Berlin is Wiener Schnitzel, a thin crumbed slice of veal. The breaded crust provides a delectable crunch and paves the way to enjoy the succulent meat inside. Pork or turkey may also be used to make Wiener Schnitzel, which is served along with potatoes or salad.

When in Berlin, another treat expats must try is königsberger klopse, a meatball dish made with all sorts of ingredients including ground veal, pork, eggs, onions and flour, and then cooked in broth. It is served with sides of cream sauce and potatoes.

Other Berlin delicacies include Eisbein, or pork knuckles made with boiled or grilled meat and served with potatoes, sauerkraut and peas; currywurst, one of the most popular bratwurst dishes in the country, which is made with pork sausage mixed with curry powder and served with ketchup and fries; and pretzels, which can be found in different varieties such as plain, cheese and even chocolate.

Berlin is also famous for its desserts. Apfelstrudel is made with apples and topped with raisins, breadcrumbs with a sprinkling of cinnamon and icing sugar. It is usually served warm with a vanilla sauce. The dish can be found in cafés and bakeries across the city and can be even enjoyed as an afternoon snack.

Berliner Pfannkuche is a traditional German pastry, similar to a doughnut without the middle hole. It is made from sweet yeast dough and fried in fat or oil. The filling may be of jam or marmalade and it is served with a topping of sugar or icing. Plain pastries are also available. Other varieties of fillings used in Berliner Pfannkuche include chocolate, champagne custard and mocha.

Black Forest gateau is a layered chocolate cake, traditionally made with kirschwasser or ‘cherry water’, which is believed to have originated in the Black Forest region in Germany. The cake is topped with black cherries.

Another classic dessert found in Berlin is Stollen. It is a bread mix with candied orange peel, dried fruit and sprinkled with icing sugar. There are 150 official stolen bakers in Germany, who use the seal of Augustus II the Strong to distinguish their products.