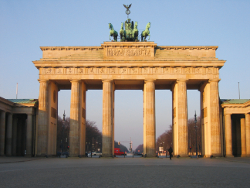 Germany is a good place to invest in property.

House prices here in Germany have been stable for a long time and are beginning to rise, unlike the situation in the UK. I only discovered this some time after I had bought, demolished and rebuilt a small house in a place no-one in Britain has ever heard of. That was in 2004. I can now say definitely that it was the best and most exciting thing I have ever done, and I haven’t exactly led a sheltered life. Hence my website, a dokuwiki, to which I am constantly adding, with the intention of introducing maybe a few English-speakers to something they might want to explore. If anyone would like to contact me there is an email address on the first page of my website.What about something different?

How would you like to live within the walls of a perfect little mediaeval city where once Johann Sebastian Bach was organist, and where the builder of the Brooklyn Bridge, John August Roebling, grew up, to name only two of the famous names connected with this place? My house, for instance, faces an 800-year-old mediaeval hospital across the narrow, paved street. Just round the corner is one of the ancient city gates. Down the street the other way is a splendid Gothic church with the second highest spire in this part of Germany. There are plenty of modern buildings, hospitals, schools, sports facilities, kindergartens, but outside the old centre. The population numbers around 35000.

Well, miles away from the places most English-speakers seem to gravitate to, in the exact geographical centre of Germany in Thuringia, or Thüringen, the area where most of the new solar industries are developing, in the ancient city of Mühlhausen which lies just north of the E40, the European Route connecting Calais with Kazakhstan and here passing through Eisenach and Erfurt in beautiful, high, rolling countryside, fruit and arable farming land mainly, but with plenty of forest. In fact, it has one of the biggest beech forests in Europe and supplies much of the rest of the world with beechwood for furniture.

I’m a retired teacher, I love music of all kinds but especially Bach, I teach English as a hobby rather than a duty, I love unearthing the history of the places I live in, I don’t drive and this city is small so that you can walk to all the places such as doctors, hospitals, theatre, shops etc. you might need, and I find people here have time to be friendly. In fact, I have made more real friends since coming here in 2004 than I ever had in the small town in England where I grew up and latterly worked. There are frequent very good concerts in Mühlhausen and several music schools for all kinds of music. There is a fine swimming pool with wave-machine, flume, several different pools and a restaurant; a fine stadium and outdoor pool; forest in easy walking distance and winter sports at the Olympic site in Oberhof not far south in the Thuringian Forest. I could go on. Am I trying to lure you here? Certainly I am.

It began by being about Germany in general, but as soon as I moved here I wanted to write about how my older son and I discovered Mühlhausen in 1994, about how I built my house and about the City in general. Now I am not known for hasty decisions. In fact I’m a bit too cautious at times. But after finishing my first house I decided to build one more to replace a wreck of a tiny timber-frame building in one of the prettiest little streets. In other words, I wanted to contribute something to a place that had been lacking investment for over fifty years. Why? Because Mühlhausen lies in what used to be the German Democratic Republic, so-called, a state that had bankrupted itself. That second little house of mine is now rented by a couple of young music teachers who have turned it into a school for classical and rock guitar, thereby adding to the music scene in a great many ways and to the life of the City.

The house I built for myself

The old house had been derelict for about twenty years or more and threatened to cave in at the back after a neglected burst water pipe had soaked the timbers and the wattle and daub infill. But it had an intact mediaeval cellar with 13th-century vaulting which I kept. The rest mostly had to be scrapped. In the new building I used as much old material as possible, inside and out. The full story is on my website. It was a fascinating process and I have included a great deal of detail about the individual firms I employed because they were so interesting and such fun to work with.

Needless to say I was merely a spectator during the whole building process, but a fairly active one, clambering around with a camera and involved in every decision. I had an excellent project manager, who explained each stage to me in detail and kept detailed minutes of our weekly site meetings. I have three fat files of architectural drawings, site meeting minutes, tenders, accounts and photos. The firm of engineers whom I employed offered a complete service as is usual here, running the process from design, planning application, tendering, works supervision, managing the accounts, to final acceptance, involving me throughout so that I now know exactly how each part of my house is constructed. I don’t think many house owners in the UK could say the same. It sounds terribly grand, but they were not expensive. From the first drawings to the final acceptance took a year. The engineers charged 5% of the total cost. There are clear guidelines regarding fees which one can check.

As I write this we have winter and temperatures well below freezing. But the house is cosy with underfloor heating and well insulated. What did it cost? Well, I used up part of an inheritance, a sum with which I could not have afforded to build anything comparable in England and where I came from it might just have paid for one small council house. Prices here are still relatively low and if I had the cash I would buy as my next project a small apartment block, of which there are several looking for new owners at very reasonable prices around 70,000-100,000 € or about £63,000-£90,000, or even less if you’re prepared to do some work on them.

Some of you will remember the Fall of the Berlin Wall in 1989. On my website I am currently adding a section about how the people of Mühlhausen stood up to the Communist regime in their own City. Few English people know that the end of the old east German state began well away from Berlin in places like Mühlhausen and long before the media got hold of the pictures. It took great courage and I feel privileged to know some of the local people who risked so much to end an unjust regime. The local Public Record Office has allowed me to do a bit of research on those events and to use some of their photographs. If you are interested you can look at the result on my website.