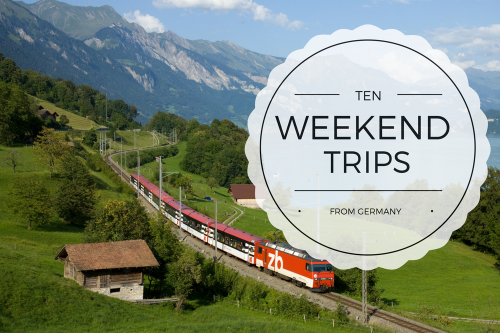 Germany—the land of beer, bratwurst and the bahn! Germany has a huge and well developed network of trains that are not only punctual but also very comfortable and relatively easy on the pocket. Trains are the most-used form of long distance transport within Germany, second only to automobiles.In recent years, with the competition from intercity bus services, the reliance on trains has reduced to an extent but trains still remain one of the best and most efficient ways to travel around Germany and Europe. Additionally, through much of Europe, trains get you from city centre to city centre through a much more picturesque route — in the same time that it would take to fly without the airport issues or bad food. You can treat yourself to a beer or a glass of wine and read a book as the gorgeous countryside rolls past.

There are many different kinds of long-distance trains to Europe from Germany and the most commonly used of these include the following.

– Deutsche Bahn: These cover the Intercity-Express (ICE) high speed trains which run mainly within Germany but to some international destinations in the Netherlands, Belgium, Switzerland, Austria, France and Denmark
– EuroCity: These are cross-border trains within the European intercity train structure and are operated by EU-based railway companies. These trains usually link important European cities and mainly run during the day.
– EuroNight: Like the EuroCity trains, these trains, operated by EU-based railway companies, are also part of the European intercity train system and link important European cities through night journeys. The Deutsche Bahn, the state-owned rail operator, runs these trains as the City Night Line and announced that these services are scheduled to be discontinued from December 2016.
– Thalys: These trains are high-speed services to Belgium and France and are undertaken using modified French TGV trains. This service runs primarily from Cologne.

One of the easiest and comfortable ways to travel across Europe by train is by using a Eurail pass which allows you access to not only a wide train and ferry network across 28 European countries but also allows you to travel at your convenience. For more details, see www.eurail.com.

Tickets for all train travel can be bought online and can either be printed out or posted to your home address. Tickets can be bought from the station on the day of travel as well. Additionally, bookings on Deutsche Bahn open up to 92 days in advance and this varies for other carriers. Fares for most sectors start at approximately 39 EUR. Booking long-distance train tickets is like booking airline tickets—the sooner you book them, the cheaper they’ll be.
Now that you know all the basics of travel in Germany, here’s our list of the ten weekend trips to Europe from Germany that you will love!

You can get to Paris from Munich in about 6 hours, departing Munich Hauptbahnhof at 06.25 a.m. and arriving in Paris 12.35 p.m. The TGV train uses the 199 mph TGV high-speed line. Paris is connected to Frankfurt by a high-speed train which takes merely three hours and forty-five minutes to arrive in Paris and departs from Frankfurt multiple times a day. Departures from Berlin usually have one change at Mannheim and get you to Paris by the middle of the afternoon. You could always make an overnight stop in Cologne and arrive in Paris by a Thalys train a mere three hours and twenty-five minutes later. Trains from Cologne run every couple of hours.

Paris is home to many iconic monuments and museums including the Eiffel Tower, the Arc de Triomphe, Notre Dame and the Louvre. It is also home to outstanding culinary and wine traditions and is every gourmet’s dream vacation! Paris has been an international artists’ hub for years and is a world centre of art, culture and theatre.

The easiest way of travelling to London involves changing a number of times but don’t worry, this is a very simple process! Take an ICE train from any city in Germany to Cologne (the overnight train is best), change to a Thalys train to Brussels (1 hour and 50 minutes), and then take the Eurostar from Brussels to London (1 hour and 55 minutes). Depending on what time of the morning you leave Cologne, you could be in London for lunch or tea!

London is an exciting city that brings together the best of many diverse experiences. It is home to some of the world’s most recognizable sights such as Big Ben, the London Eye, Buckingham Palace, the British Parliament, the red double-decker buses—the list is endless. The city offers accommodation, food and entertainment to suit a very wide variety of budgets. A number of internationally renowned museums and art galleries are open to visitors at no cost.

You could get from Munich to Prague on the Alex train in less than six hours. Leave as early as 04.55 a.m. and be in Prague in time for a late breakfast. From Frankfurt, take a direct train or a sleeper train which will also have you in Prague for breakfast. From Cologne, you’d need a few hours’ stopover in Berlin before boarding an ICE to Prague so it would be best if you got the overnight train to Berlin and took the morning train to Prague. Berlin offers a number of connections with an average journey time of four-and-a-half hours. These trains run along the gorgeous Elbe valley and you can enjoy a sit-down meal in the restaurant car on your way there.

Prague, an incredibly beautiful city, is a city made for lovers. The Charles Bridge, the Prague Castle, and the Old Town Square are some of the must-see monuments and areas in the city. Coming down the cobbled streets leading out of the castle onto the Charles Bridge at sunset is an essential experience in Prague. There are many heritage walks you could take to acquaint yourself with the city, its history, culture and food.

Departing from Berlin, the day train takes the entire day to arrive in Budapest but the night train which leaves Berlin at 6.14 p.m. arrives at about 08.35 a.m. From Cologne, the day trains also take all day and so you can take an evening train to Munich and post dinner, board the sleeper train to Budapest and arrive there at 9.25 a.m. You could also take the overnight train to Vienna and then a Railjet train, which leave every two hours, to Budapest. Direct Railjet trains run from Munich four times a day.

Built on the banks of the Danube, Budapest is an ancient city with a plethora of important sights—the Buda Castle has been declared a UNESCO World Heritage Site. Most of the sights in Budapest are free and the Great Synagogue with its beautiful arches and Holocaust memorial is a must-see. The Great Market Hall, the oldest food market, is spread over three levels and is also another must-see.

As with other cities in Europe, there are many ways to get to Brussels from Germany but perhaps the easiest way is from Cologne. You arrive early on an overnight train from any other city (the day journey from Berlin to Cologne takes just over four hours by an ICE and journeys from other cities are approximately the same length) and then leave for Brussels by the Thalys which will get you there less than two hours later. This route is also a good way to travel to Bruges.

There are many good reasons to visit Brussels but perhaps the best is that Belgium is the city of chocolate. More than 170,000 tons of chocolate are produced annually. More than 400 types of beer are available in Belgium and the most famous of these is produced by the Trappist monks.

Direct sleeper trains depart from Munich (at 9.08 p.m.), getting you to Milan Centrale at 9.12 a.m. You could take the morning trains to Verona and then find an onward journey to Milan on www.italirail.com. If you’re coming from Frankfurt, Berlin and Cologne, take the afternoon train to arrive in Munich in time to take the direct sleeper train to Milan. From Berlin, you can also take an overnight train to Zurich and catch a connecting high-speed train, through the gorgeous Swiss Alps, to Milan.

Arguably the most stylish city in Europe, Milan is Italy’s fashion and design capital. There is more to the city than fashion though—the Duomo, Milan’s gothic cathedral, is the third largest cathedral in Europe. You can also visit one of the most famous paintings in the world—the Last Supper—and many other art galleries and museums with very important collections.

A direct sleeper train from Berlin (6.14 p.m. departure) to Vienna (7.02 a.m. arrival) is the most convenient way to travel. You could also take a day train to Prague and change over to a Railjet train to Vienna. The route through Prague is the most scenic and is the one to use if travelling during the day. The same route can also be undertaken with a night stop in Prague, allowing you to explore Prague for one evening.

There is no dearth of reasons to visit Vienna—the Demel pastry shop, the Schonnbrunn Palace, and the Hofburg Palace among many others. However, any visit to the only metropolis in the world that grows its wine within the city limits is incomplete without going to a heuriger or a wine tavern. These taverns serve fresh wine of the current vintage and are a great place to enjoy Viennese wine, food and music.

There are direct trains from Berlin to Amsterdam running every two hours. These have a running time of six-and-a-half hours. The journey from Frankfurt to Amsterdam takes under four hours and the service runs several times a day. From Munich, you can take a day train with one change at Hanover but this journey takes eight hours. The most efficient way to travel from Munich is the overnight train which arrives in Amsterdam by 9.34 a.m.

Amsterdam is one of the most vibrant and fun cities in the world and its many charms include the Van Gogh Museum, the coffee shops, incredible nightlife, walks and cruises around the canal, and a floating flower market.

You can get to most parts of Italy from Munich via Verona, and from there you can take onward connections to Venice. You can enjoy a meal in the waiter-service restaurant car of the EuroCity train to Verona which runs through the breathtaking Brenner Pass. On the weekend, this service stops at Venice. There is also a direct train to Venice, arriving at the Grand Canal once a day. You can also take the direct sleeper train from Munich to Venice.

The much-touted Grand Canal is not the only reason to visit this beautiful city. Walking through the Dorsoduoro and the San Polo neighbourhoods in Venice will give you an insight into the slow, relaxed Venetian lifestyle and make you fall in love with the city in a new way. Sights you should not miss include St Mark’s Basilica, the Rialto Bridge and the Bridge of Sighs.

You can arrive in Zurich from Munich in under four-and-a-half hours through multiple daily trains. From Berlin, the daytime trains to Basel (from where you can travel to any Swiss city) take a long time and you can break your journey in either Frankfurt (with a travel time to Zurich for approximately four-and-a-half hours) or Munich. There is also a daily sleeper train from Berlin to Zurich.

Zurich has a bustling and historic city centre but includes a lot of natural beauty. Lake Zurich is about 25 miles in length and is one of most scenic spots in Switzerland. You should also take in the Museum of Art and the Zoological Museum while you are there.

Have you taken a European weekend trip? Share your experiences in the comments!