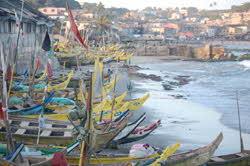 My name is Drew Cosgrove. I “commute” from Atlanta, GA to Accra, Ghana and I have a wife and daughter who still live in the US.

I work in the Petroleum Industry and my company received a new contract for one of its rigs to work in Ghana. I’ve done this for nearly a year starting back in April.

I have not had many challenges as I am a “commuter” but I was the one who was responsible for figuring out what the solutions were for those who did move in. The biggest thing is receiving your household goods. If you do not have an established agent handling the shipment you will be left with lots of fees and a very long “clearance” time.There are several very good internationals schools. There is an American, British, and French school. There are a fair amount of people who home school their children as well (mostly Americans).

Credit cards are generally accepted at most brick and mortar stores. That being said, Visa is the most widely accepted, MasterCards are accepted at a few places but forget about American Express. It is VERY expensive to shop at the nice stores for food. Generally I would go to the local markets. Be sure to give the produce a disinfectant wash (chlorine bleach and water) before consuming.

English is a second language for everyone in Ghana as there are many native tongues and dialects within the native languages. Aa a result, purchasing food and other goods was not that difficult.

Ghana is an emerging West African country but has many conveniences that Americans and Europeans would be used to. There is a very large American, British, and Dutch expat community. The community is very broad-based in terms of industries. Petroleum, Finance, Construction, Government, and Missionary Groups are very prevalent in Ghana because of the politically stable nature of the country.

Property can be found to rent very easily. Be sure and understand the withholding tax that is to be deducted from the rent (you are responsible to pay the withholding tax as a renter). So if you have a rent amount of 2,000 USD per month, you are responsible to withhold a percentage of that amount from the landlord, pay the government the money, and provide a receipt to the landlord for his taxes, showing that you paid it. Generally the company who moves you to Ghana has an entire group of people who do nothing but deal with local tax issues and questions.

The market is very good. There are a lot of new homes available and existing homes are reasonably available.

Employed by a company.

Most definitely. Not as many as, say, Singapore or Hong Kong, but definitely a broad base.

There is never a dull moment!

The biggest problem in Accra is the traffic. Unless you have a driver, I would not attempt to drive yourself. The driver is necessary for dealing with the police (frequent stops) and keeping the car handy due to the lack of street signs (none) and parking spots (complete lack of).