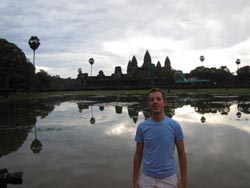 My name is Michael Tatarski. I am a 22 year-old American from New Orleans who is teaching English in Ho Chi Minh City, Vietnam. I attended the University of Pittsburgh, in Pennsylvania, where I studied Political Science and History.

I moved to Ho Chi Minh City, which most people still call Saigon, on September 8th of this year. I moved a few weeks after graduating from the University of Pittsburgh. I wanted to get a job overseas but wasn’t hired by my desired government agencies, so I decided to go into the ESL field and move to Vietnam.What challenges did you face during the move?

My move was actually rather easy. I enrolled in a ESL certification course several months ago, and half of the training took place in Saigon. LanguageCorps, the company which provided the training, arranged a hotel for my first two weeks here, and the staff was very helpful in getting us adjusted to life in Saigon. Obviously I missed my family, but it is easy to make fast friends in the expat community here.

I decided to look for housing with two of the other training participants. One of them found a real estate broker who was advertising houses on Facebook. We contacted him and looked at an amazing 3-bedroom house and signed the lease shortly thereafter. The renting process was fairly straightforward. Some extra paperwork was necessary since we are foreigners, but nothing too complicated. It helps that you broker speaks a good amount of English, although our landlord butchers the language and is somewhat crazy, but she leaves us in peace for the most part and responds to any problems with the house quickly.

Very few, if any. We live in a non-touristy part of the city, District 3, that is mostly inhabited by Vietnamese. The big expat areas are farther outside of the city.

The locals are, for the most part, very friendly. There is an obvious language barrier between me and most of the locals, but we can still communicate if need be. I treat the locals with respect and they reciprocate.

The fact that we don’t live in a heavily touristed area. My neighborhood gives me a much better sense of what Vietnamese culture is like. Living in a high-rise apartment building would just be wrong, in my opinion. There are also many cheap and very good restaurants serving a wide range of Vietnamese cuisine with easy walking distance. The food aspect goes for the whole city as well. Saigon is a gastronomic playground, with almost any kind of food you can think of available somewhere. Overall life here is fairly easy for an expat.

The language barrier can be frustrating at times, but I realize that that is mostly the fault of my poor language skills. Something else, which doesn’t necessarily have to do with being an expat, is the traffic in Saigon This is the most frustrating aspect of life here. The city is a pedestrian’s nightmare. I do drive a motorbike, usually quite well, but rush hour is still an absolute nightmare. Definitely not for the faint of heart. Having to deal with touts can also be annoying. Anyone who is selling something thinks all Westerners are tourists, so if I walk through the main backpacker area I have to wave off numerous cigarettes, book, and sunglass sellers. I sometimes wish I had a t-shirt that said “I’m not a tourist!” in Vietnamese on it.

Come in with an open mind and embrace the local culture. The biggest piece of advice I can give is to eat like the locals do. Vietnamese cuisine is amazingly diverse and flavorful and a joy to explore. Embrace the street food culture!

Understand that life here will be much different from where you came from, unless you’re coming from another part of Southeast Asia. Expect to be surprised. Many people do not realize how modernized Saigon is. Sure, there are still some rough patches, but this is a very cosmopolitan city that is growing explosively, much like the rest of Vietnam.

My plans for the future are still uncertain. I’m returning to the U.S. next fall for a wedding. I will probably try again to find a job related to International Relations or foreign policy while there, but if that doesn’t work out I will most likely continue teaching, either in Vietnam or someplace new.