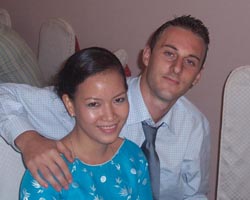 I moved abroad to Korea in 2004 before heading to Vietnam in 2005. I had spent a year travelling Asia and Australasia before that, and the thought of returning to England to embark on a long, mind-numbingly boring career (which seemed the only option) was not too appealing. I preferred the excitement of boarding a plane with a few hundred dollars in my pocket to a far away country. I took a contract to teach English in a small South Korean countryside town and have never looked back.What challenges did you face during the move?

Korea was a culture shock certainly, as was Vietnam, but at the time I was so young that I didn’t really feel like it was a challenge, I just took everything in my stride. One challenge I met during my time here in Vietnam was that of bettering my career chances. I took my wife, who is Vietnamese, back to England for 10 months. During that time I returned to University to get my postgraduate teaching qualification, allowing me to apply for better jobs in Vietnam, and improving my career prospects. My daughter was also born during that time, on English soil.

I came to Vietnam to study in a TEFL course and soon after arriving moved into a shared house with other trainees. After six months they left the country and I moved into a single room in a large house with a Vietnamese family. I had a small balcony and used a shared bathroom. It cost ($50) a month and I lived there for a year and a half until I got married. We then progressed to an apartment in the city which was ($350) per month, and now we live in a nicer suburban area (the first of its kind in Ho Chi Minh City) in a three bedroom apartment where rents are anything from ($700 to $2000+) a month for an apartment or villa.

There are lots of Expats in my area and the city generally, and there are lots of activities to do to keep busy and make friends. The area I live there are a lot of wealthy Vietnamese, Korean expats and then a large smattering of Westerners from all over the world.

Fine! Almost everyone is very friendly, as long as you smile and have the ability to laugh at yourself sometimes, there’s no problem.

What don’t I like should be the question! With my career and my profession I can look forward to a secure future here without the burden of debt that I would need to take on back home to consider property ownership. It’s a fantastic part of the world to be in, with so much development going on, and so many opportunities. It has lots of nice, inexpensive places to travel and it’s also a short hop from the beaches of Thailand and the rest of South East Asia. Then of course there’s the climate. I get a constantly perverse sense of pleasure from spending all my time out of work in flip-flops and shorts. It’s a no-brainer if you ask me…

Of course, Vietnam can be frustrating sometimes – the procedures here are fairly draconian, infrastructure is not so good (but improving) and the grass is ALWAYS greener. The times when I get frustrated or tired, I try to remember that. It doesn’t matter where you are in the world, happiness is inside – so it’s important to find peace with whatever situation you are confronted.

Just go for it. Listen to your heart and not your head. Especially if like me, you’re young and have very little to lose. I’m not the kind of expat who suddenly decided that I ‘needed a change’ after 30 years and sold everything to take a new life somewhere. I guess I didn’t need to go through the 30 years to know it wasn’t for me!

Who knows. My wife and I hope to work in other countries at some point in the future. We have some land in a nice countryside area and we wouldn’t mind attempting some business there when economic development reaches that area, not for a few years yet. I hope to be able to retire from working full time at an early age and pursue my own interests – possibly write a book or start an online business.