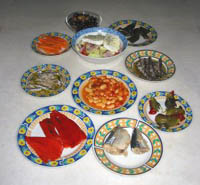 Greek food and wine is popular the world over. The Greek cuisine is mainly Mediterranean and uses a generous amount of olive oil. Within Greece, there are regions that have their local specialties. There are also many recipes that are prepared the same way across the country. Here is a short guide to food and drink in Greece.

Appetizers or mezedes are served before or as accompaniments to the main dishes. Different varieties of mezedes may also be served throughout an evening along with drinks.It is customary to serve them with ouzo or tsipouro, two popular Greek alcoholic drinks. Mezedes constitute an important component of Mediterranean cuisine and some classic mezedes include melitzanosalata (eggplant dip), spanakopitakia (small spinach pies), dolmadakia (stuffed vine leaves), tzatziki (cucumber and yoghurt dip), and feta cheese. Another common appetizer at a typical Greek meal is kalamarakia, a stuffed fried squid recipe served with lemon. For meat lovers, there’s Keftedakia, fried meatballs made with beef, garlic and bread.

Soups are more popular during the winter months. A typical soup menu may feature dishes like fakies (lentil soup); kotossoupa (chicken soup) and kakavia (fish soup). Magiritsa is a soup made with spiced lamp or goat offal that is eaten as an Easter tradition.

Most Greek main dishes are made with meat. Some of the most common dishes are paidakia (grilled lamb chops), moussaka (eggplant and spiced meat casserole), pastitsio (baked pasta with minced beef and béchamel sauce).

Each region in Greece grows a different variety of grapes and therefore has its own special wine. The Santorinian Vinsánto is a world-renowned wine known for its rich sweet taste. Ksinómavro is a red wine from Northern Greece that produces a variety of tastes depending on the period of maturation. Athíri comes from the southern Aegean and Halkidiki islands. It is a white wine with a delicate fruity taste that goes well with many dishes. Muscat or moschato comes from many different regions and is usually served as a dessert wine. Another favorite dessert wine is Mavrodáfni, a naturally sweet red wine.

Greece also has its own beer, although it’s not as popular as the wines. Beer is often served as an accompaniment to a meal.

Greeks love eating out and most restaurants are quite affordable. To get the best Greek food, head to places frequented by the locals. These eateries may not have much of an ambience, but they will provide authentic Greek meals made with fresh ingredients.

The estiatório and the tavern are the two main types of restaurants in Greece. At an estiatório, a variety of dishes are cooked in batches in the morning and placed on steam trays. Customers simply choose point to what they want on the trays. There are many typically Greek dishes on offer such as moussaka, vegetable casseroles cooked in oil called ladherá, lamb stews and oven-baked meat and fish. Tavernas range from the touristy eateries that have a more elaborate menu to the more simple eateries, which serve the standard taverna foods like mezedes, fried or grilled meat and fish, spit-roasted lamb or pork and a few salads. The oven-cooked dishes are generally not served at the smaller tavernas.

Kafenía are coffee houses that serve the traditional Greek or Middle Eastern coffee along with other beverages like tea, juices, soft drinks, brandy, ouzo and beer. They open early in the morning and stay open till late at night. Some of them may shut shop in the afternoon during the siesta hours. There are also the cafeterias, which serve a wider range of coffees like kafés frappe, a chilled and sweetened instant coffee with condensed milk; and other international-style coffees. Cafeterias charge a lot more for their beverages compared to kafenía.

Cake shops in Greece are called zaharoplasteia. They offer a wide variety of chocolates, desserts, cakes and sweets like the Greco-Turkish favorite, baklava; Galaktoboúreko (semolina custard pie); and kataïfi (pastry with nuts and honey). Another traditional specialty at such places is glyká koutalioú or homemade candied fruit. A galaktopolío is a milk bar that serves dairy-based foods like rice puddings (ryzógalo), custards (kréma) and locally prepared yoghurt. Greek families love to frequent zaharoplasteia and galaktopolía.