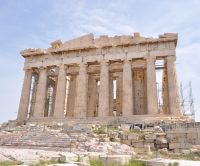 Greece had never featured particularly high on my radar of places I wanted to visit. I found myself there in August 2004 after successfully applying to volunteer at the Athens 2004 Olympic Games. But Greece is the home of interfering gods and the Fates, and they had other plans for me. What was to be a one-off two week trip ended up turning into a much longer relationship.

On my first day as a volunteer, I met my husband who was coordinating the centre where I was based. I returned to the UK and we stayed in touch. Our conversations became longer and more frequent, and the rest is history.

We managed a long-distance relationship for several years until it came to the crunch – who was going to move?With my husband permanently scarred from his experience of British weather while studying for an MBA in the UK, the ball was in my court. And so I decided to take the plunge and move to Athens. Almost everyone thought I was crazy, even the Greeks. But I think secretly we’d all like to challenge ourselves with new horizons.

Having taken a few trips to Greece, I knew my main barrier and biggest irritation was not speaking the language. So in the six months building up to my move, I enrolled in Greek lessons after work to have a base to build upon.

I would be arriving in the middle of the summer when everything shuts down in Athens. There would be no further opportunity to get started with Greek until September so I considered it pragmatic to have even a basic level of understanding.

It’s a common expression in English to say “It’s all Greek to me” when something is beyond our understanding. In Greece, they say “It’s all Chinese to me”. I found my first year and a half of life in Greece utterly bewildering.

The noise, the suicidal traffic and people I didn’t know striking up conversations with me were alien notions after life in the UK. I would observe people who looked like they were about to kill each other one minute chat and laugh the next. “They’re just talking” my husband would explain. Soon, I learnt that he was right. The Greeks wear their hearts on their sleeves – if they are feeling something, they let it be known.

That’s why road rage is pretty uncommon here. None of that British stiff upper lip for the Greeks, if you cross them, they will have it out with you there and then before going their separate ways having had a good scream.

It’s been pretty easy for me to blend in, at least visually. Usually no one realizes I’m not a Greek myself until I make a mistake with the language or my accent slips. The Greeks remain very welcoming and nothing delights them more than a foreigner earnestly trying to navigate their language.

Although I am a foreigner, I don’t consider myself that much a part of the expat scene. Many of the expats in Greece are here on work contracts. This means they have every intention to eventually leaving again and make next to no effort to integrate. Their social circle consists of other expats, and they don’t feel the need to learn the language.

The best advice I got when I moved to Greece was to avoid the expats until I was settled in. The few times I joined expat gatherings, I found them emotionally exhausting. It seemed fair game for them to indulge in endless Greek-bashing since they weren’t going to stick around. For me and other foreigners who have made Greece our home, their attitude is toxic.

Another great outlet was to find a hobby of my own. I took up bellydancing as soon as I arrived here and through that, not only was I forced to practice my Greek but I made friends of my own separate to my husband’s circle.

Life in Greece is heady and exciting, frustrating and infuriating in equal measures. When you’ve lost an entire day in public sector offices trying to chase an elusive blue stamp, the ‘ble sfragida’ that Greek bureaucracy is so in love with, at least you can unwind with a walk on the beach in the summer breeze.

As the financial crisis deepens, my family often calls on me to move back to the UK where both my husband and I could earn substantially more. If it ever came to that, it would be an extremely painful decision. I think I would protest much more loudly than my husband! Greece is my home now and has cast a spell on me. There’s nowhere in the world like it.