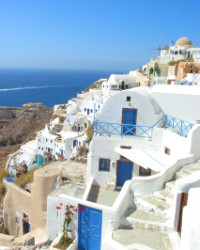 Greece’s economic situation has led to a significant drop in the price of real estate. This is good news for expats who can now buy or rent property at affordable rates. There are variations in property prices from one island to another with factors like weather and accessibility also playing a role. The location and nature of the land also determines how much one pays as property transfer tax. In 2013, the Greek parliament approved a new law that may ease the tax burden for owners of second homes.

Those looking for a piece of Greece to call their own may want to consider the following property hotspots.

CreteCrete is the largest of the Greek islands and a popular destination for retirees. Industry is sparse in the area and therefore the seas are clear. One can find considerable organic produce here and most tourists flock to the island for its scenic beauty. Well connected, with two international airports, Crete has many property buyers especially along the western coast in the cities of Rethymnon and Chania. Rethymnon has a beautiful beach area along with some great restaurants and bars. Those who prefer something quainter may consider buying property in one of the little fishing villages in the area. The main advantage of owning or renting property here is that both international airports are just an hour away. It may also be possible to get a bargain in the region east of Chania where there are numerous small villages. The town of Kolymbari to the west of Chania has recently seen a lot of buying activity. The eastern region of Crete is often bustling with tourists and preferable for those who prefer a livelier environment. Then there are the old stone houses in the inland villages, which you can make your own after some renovation.

The second largest island in Greece, Corfu, has a strong tourism industry and has witnessed considerable development over the years. Corfu enjoys good weather and is more temperate compared to other islands in the south. It is also easily accessible with many charter flights going to and from the island. Corfu is popular among tourists and for this reason many invest in property here, so they can make good rental returns. Some of the property hotspots in Corfu include the northeast and northwest areas. Prices may be lower in the inland region, which is some distance away from Gouvia and quite close to Corfu Town. You will find many high-end villas on the northeastern coast where a great deal of real estate activity takes place. For something more affordable, there are the resort apartments and village properties that are ripe for renovation.

Rhodes has a considerable expat population. A good place to buy property in Rhodes is the northern region of the island. Here you won’t find too many tourists as it is less developed. Village homes can be found near the west coast where the average price for a one-bedroom house with a sea view is below 85,000 euros. Rhodes is a property haven where you can find anything from resort apartments to farmhouses. Since there is stringent control on planning in the region, there are no mass developments. The developmental work here is small-scale and most of it is in the traditional Greek design. The archaeological site, Lindos, on the east coast of Rhodes has higher-priced properties on account of its connectivity to the entire island and high quality of amenities. Most buyers prefer the area just outside Lindos, where the prices are much lower. Here, a villa is likely to cost approximately 220,000 euros while a studio house would be somewhere at 70,000 euros. The village of Genadi, in the south of Rhodes, has recently become popular among buyers. It is largely unspoilt with a large beach area and is well equipped with amenities.

Other property hotspots in Greece include Porto Heli and Kosta along the coastline of the Peloponnes, Spetses island, Patmos in the Dodecanese complex and Halkidiki in the northern part of Greece. Remember that to buy property in ‘border areas’ such as Crete, northern Greece and the Dodecanese islands, non-European Union passport holders need to obtain a special permit.