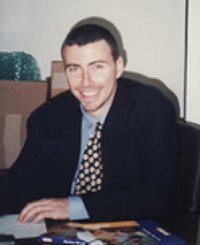 I am part of the management team for a large US based chain of language schools. Recruiting, training, and managing teachers are my main responsibilities. My father worked for IBM, so the family moved around quite a bit. First, from London to upstate New York and finally ending up in Sydney. So, from freezing winters the Family made the adjustment to baking Christmases at the beach with prawns replacing the turkey. Having caught the travel bug from my dad, I left Australia just as soon as I had graduated. I have worked in many countries including China, Japan, and Indonesia.Where, when and why did you move abroad?

I got the chance to travel to Tokyo accompanying my stepfather who was giving master classes in opera there. My mum had just got back from the US giving lectures in Sociology and wanted a bit of down time at home. This was great because it meant that I was able to enjoy all the perks of travelling with a VIP. We had a chauffeur who drove us around all of the historical sites in Kyoto and stayed in a 900 year old Ryokan. He then left and I was staying with a lovely Japanese family and became their fourth child. I had a working holiday visa and started looking for jobs teaching English.

Moving to Hong Kong was pretty easy because my Japanese wife’s company took care of the move. We had a professional moving company and she went on ahead to find us somewhere to live. The company helped her find a three bedroom, two bathroom apartment in Discovery Bay. The biggest challenge was the language (Cantonese is impossible compared with Japanese). But then, most people spoke English. Their brusque manner was a big change after softly spoken Tokyo. Having a maid made us feel uncomfortable in the beginning.

We moved four times during our five years in Hong Kong. Always with an agent who spoke English. Sometimes the agents were young people from the UK. Naturally, they show you all of the worst places in your price range first as they are trying to offload them. Typically, expats work and play hard in Hong Kong and the market for good apartments is very competitive. We found it hard to make time to see apartment after apartment until we wore the agents down who started showing us some of the good stuff. If you are trying to juggle a new job and are desperate to get settled so that you can focus on your new job, this can be quite stressful. There is always a time factor and the agents can sense your desperation. You have to just stick to your guns and eventually you will find a place that suits your needs and your budget.

In Discovery Bay there were lots of expats. And, there a popular expat hangouts in Lan Kwai Fong (above Central) where people are pretty friendly as the expat community is like a very large extended family. If you like rugby and beer, then it is easy to make friends quickly. If you are not a bar or nightclub type of person, then it can take a little longer. In Lam Tin (East Kowloon), there were very few expats, so we felt like we were more immersed in the local scene which was fun after the fairly removed setting of Disco Bay. Finally, we moved to the mid-levels which I have heard described as a ‘gweilo’ (white person) ghetto. Apart from the peak hour traffic, the mid-levels are the place to live. Everything is so handy and getting home is a short taxi ride late at night. Plus, if the traffic is really bad, you can always walk.

The Cantonese are an unusual blend of well meaning and neighbourly people who have a very abrasive manner. It takes getting used to someone shouting at you because they like you and therefore want to show enthusiasm. They are sort of like the uncle who pinches your cheeks, claps you on the back, and bear hugs you till you think your ribs might crack. People sometimes seem rude, but in fact can be very kind and helpful. In turn, when you start to learn a bit of the language and can tell them to ‘forget it’ (complete with an array of colourful expletives) when they try to overcharge you, the shopkeeper will laugh with delight an immediately drop the price. If you good naturedly haggle some more (again insulting the person and their merchandise) they will probably knock off another 20% and throw in something for free.

I am in Jakarta now, but one of the things I loved about living in Hong Kong was the infrastructure. It has one of the best public transportation systems in the world. The food is great. Not just the Cantonese food, but the Szechuan (my personal favourite) and the great European and South East Asian cuisine on offer. Seafood is not really my thing, however I have been assured that it is some of the best in the world. For a lot of female expats in particular, I think the fact that it is so safe is a huge bonus. You can take trains late at night and not even give it a second thought. Of course, for people coming from cooler climes, Hong Kong’s mild climate make it a great place to live. The only time that you might feel cold is in a supermarket or the cinema (always take a sweater). Having a lot of warm weather means being able to take advantage of the beaches. I remember visiting Cheung Sha beach on Lantau Is. right after getting back from Honolulu. It is definitely prettier that Waikiki and has fewer tourists.

People come, but unfortunately they also go. It sometimes seems as though as fast as you make new friends, old ones leave. So, it is very important to remain active socially. Many expat activities revolve around eating and drinking which means you must be vigilant about your health. Expat life has been a lot easier since the internet. Gone are the days when you could feel cut off and miss your friends and family back home. These days, as long as you get the times right, you can just Skpe (for free). And yes, people may stare at you. If you are an insecure person, this can be very disconcerting. I hardly notice it anymore and quite like the attention. Not everyone feels this way, I am afraid. Of course, starting off the language is usually the biggest single barrier. Although, it is amazing how many expats live in a country for years without lifting a finger to learn the simplest and most common phrases. When you are new, you also feel a little helpless, because you do not know how to buy a train ticket or ask for directions. However, if you do your homework before arriving in a place, this will soften your landing.

If you are to enjoy expat life, you need to embrace the local without severing ties with where you are from. Of course you must try new things and keep an open mind. It never fails to amaze me how many expats say ‘well, this isn’t like at home’. No it is not which is completely the point. You have not flown thousands of miles to have the same experiences that you would in your own country. Get to know the locals, learn the language (even if only a few phrases), and embrace the food. In Hong Kong, a great way to start is Yum Cha (literally ‘drink tea’). Make some new friends and invite them out on a Sunday morning for a traditional Cantonese Dim Sum feast. The noise and the bustle are all part of the experience. Chinese dining is traditionally all around a round table meaning that everyone is included in the conversation.

I am debating whether or not to return to Sydney (my parents are 70 and 80) so I can be with my brother and his family, or throw caution to the wind and take a new position somewhere really different like Istanbul or Nairobi. I think, based on the last 25 years that the latter is more likely.