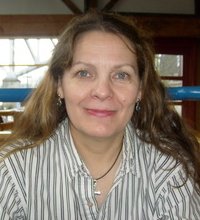 I am a Toronto-born, Canadian Caucasian of British descent, an English teacher, minister of the Gospel, mother of six and grandmother of eleven. My first son was born in the back seat of a car on the Mexico City autobahn.

As each child came along, we just added them to our travel roster. Since 1974, we have been expats in such countries as Mexico, Switzerland, the Netherlands, Belgium, Luxemburg, Turkey, Cyprus, Greece, Thailand, Malaysia and the US. Then, as a single mother, I lived with three of my children in Spain for two years before continuing on to South Africa and Zimbabwe. Later, I travelled alone overland from Malaysia to China. Although Borneo was the one place on earth I feared the most, I actually went to Saba with a group of friends and stayed in the long houses for two weeks. Now, I love Borneo.Where, when and why did you move abroad?

Ever since I left Zimbabwe in January, 2000, I longed to return to Africa. Four years later, I was still in Canada when my son invited me to join him and his family (wife and then three children) to Africa. Of course, I accepted. But, while we were living together and making travel arrangements, the plans suddenly changed.

It seems that, all along Tim had been yearning to return to Malaysia but had compromised with his wife who chose Africa, instead. Until, one morning, she woke up and said, “What the heck. I don’t mind going to Malaysia.”

Recalling the weather conditions in SE Asia, I pondered the idea with a bit of trepidation. The SE Asia I knew back in the 80’s was “unair-conditioned”, “un-infrastructured”, disorganized and a bit smelly.

Still, when Tim came in the door one day and announced, “I got the tickets!” what was I to do? Malaysia was on. It was November when we packed our bags. The day we left our house in Brampton, Canada, there was an early snowfall. Fluffy flakes of snow quietly filled our yard with pure white. What a send off! The children were awe-struck.

We had bought the most inconvenient flight available on the cheap, so our flight itinerary was crazy! From Toronto, we flew South to New York, only to fly North again to Alaska. Then Alaska to Taipai. Taipai to Kuala Lumpur (K.L.) Although the tickets were sold to us as “return trip”, they only appeared on paper that way. That’s a trick that some seasoned and daring ticket agents do to save their customers money. It really slashed the price. That part of the deal was great, but it did add a few hours of airport waiting to our trip. The newborn infant just didn’t take to travel, either, unfortunately. He cried all the way across the ocean. We took turns holding him.

During the flight from New York to Alaska, my granddaughter had fallen asleep on my lap. We disboarded the plane and got into a shuttle while she was still asleep. Suddenly, I felt something warm flow over my legs. She had peed all over me!

“Who forgot to put a diaper on Ana?!”

Travelling with children doesn’t always make for uncomplicated leisure. Not at all. My advice to would-be travelers who want to bring their children along is, “Don’t do it!”

Just kidding. The kids help you to see things you may not otherwise notice and experience the trip through their eyes. It’s wonderful, actually. Kids are so multi-dimensional on so many levels, even though they’re usually a bit high-maintenance…

We landed in K.L. and took a taxi to a reasonably priced hotel. Then, after exploring our area a bit, Tim suggested we go out of the city to a “garden city” called Seremban. The huge taxi only cost 100 RM or so. (Just over $30.00 Canadian.) Once we were there, Tim started house-hunting. He called a real-estate agency and they found us a large, brand new, five bedroom house located just outside of town. It was between 6 and 7RM away by taxi, but you could also take a rickety old bus that cost less than a ringgit.

The house was newly built but pretty raw. There were no counters in the kitchen, no closets in the bedrooms and only two ceiling fans –one in the master bedroom and one in the livingroom. Of course, the rent was pretty cheap by Canadian standards. It was 500RM, which was roughly $170 Canadian at the time. (So cheap, in fact that my son continued to pay rent on the house when he left the country so that he could just move back in when he returned.)

The first thing we did, after moving in was to buy mattresses for everyone. I slept on mine on the livingroom floor. For the first few months, we ate out for every meal. Then, slowly, slowly furniture and a fridge and washer came along…

In Seremban, at least, there’s an abundance of housing available. Our house was one in several blocks of new housing that was being built along the highway. Many of the houses remained empty for years after we moved in.

For us, the empty house next door became a disadvantage.

One night, while we were all sound asleep, we were invaded by thieves! They silently bent the thin, iron bar railings on the inside of our kitchen door, crawled under the railings, crept upstairs into our very bedrooms and took our wallets, purses, laptop, video camera and money.

I woke up the next morning from a deep sleep to find a trail of things scattered from my room all the way down the stairs, so I ran upstairs, shaking and informed Tim that we had been robbed. He opened his eyes, ran downstairs into the kitchen and continued to follow the trail out the back door. Our ID cards were strewn in the gutter and my guitar had been left behind, leaning up against the wall. (How considerate.)

We had heard stories of gypsies from Indonesia who used a sort of sleeping powder on their victims so that they would sleep through the robbery. It seemed to me that there must have been some truth in that because, all of us, even the kids, had slept deeply enough to not hear a thing.

Expats seem to be few and far between. When I joined the international school in Nilai, I met a couple of Ozzies, and there was another Canadian couple in the area, teaching teacher.

We also made friends with a family from Finland and a couple from the U.S.

When we were living in Seremban, we often received invitations from the locals to celebrate their festivals. They have parties at their homes with loads and loads of food and drink. There was a certain Chinese man who was very insistant about having my son and his family to his children’s weddings. A couple of times, he sent a car to load them up and ship them off, like it or not! My son, who is now quite able to carry on a conversation in the local language, has many friends. He also goes hashing and belongs to Hash clubs.

I like that I don’t have to wear winter clothes or boots, spend a fortune to heat my house, shovel snow or freeze while waiting for a bus. I like the all-year growing season, the access to vitamin D3, the humility of my neighbors, the beauty of the trees, the sound of the birds in the morning,…

I love the location of Malaysia. It’s close to Indonesia, Thailand, Cambodia, Singapore and Borneo, etc. You really could go to a different country every week if you wanted to.

Westerners can easily become annoyed by the way some things are done (or not done) in Malaysia. For example: taxi-drivers don’t know how to drive for their passengers; the garbage trucks goes around drizzling stench that stinks horribly for days afterwards; cashiers tend to move very, very slowly, so you must learn patience with that, or you’ll go mad. Anything made in Malaysia has a tendency to wear out quickly or break. The weather is hard on your belongings. You can’t find shoes to fit, unless you go to K.L. Stray dogs are everywhere.

I would suggest that you find a house that’s already furnished. You can usually find that online. If you want to save money, the best way to do that is to ask or pay a local to find a house for you. Then, you can afford to furnish it yourself with the money you’ll save.

Don’t expect first world behavior from third-world people. They’re doing their best with what they have.

What are your plans for the future? At the moment, I’ve started up an English tuition in my home and I hope to grow that to where it pays the bills. I would love to be able to live overseas for the rest of my life!