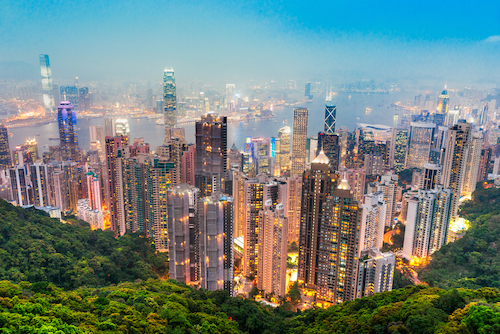 Hong Kong used to be considered a mecca for expats back in the day, but is that still the case? It’s no secret that the cost of living in Hong Kong has been skyrocketing over the years and that the job market changed completely in the late 90s after the city-state was handed back to China.Does this mean that the notions about it being a great place for expats just are hand-me-down sayings from a bygone area? Is Hong Kong still a good relocation choice for migrants, and more importantly, what is life really like for expats living there? In this guide, we cover everything from the cost of living in Hong Kong to the job market, official languages, pensions and any other important questions you may have to help you make your decision.

Some people who have never visited believe that Hong Kong is hot and tropical all year round. However, this is not the case. Hong Kong has a sub-tropical climate, which means that there are four distinct seasons. Unlike many other parts of Asia, which just have rainy and dry seasons, Hong Kong has spring (which is warm and humid), summer (hot and rainy), autumn (sunny and pleasant), and winter (dry and cool).

Hong Kong also experiences a monsoon season over the summer months which, as you might expect, sees many tropical storms and typhoons. However, the city is well prepared for such weather.

Is It Really That Expensive?

A few years ago, Hong Kong was the third most expensive city in the whole of Asia, coming in just behind Shanghai and Beijing. In 2019, Fortune Magazine crowned Hong Kong one of the world’s most expensive cities, sharing the title with Paris and Singapore. Fortune drew this information from the annual Worldwide Cost of Living survey by the Economist Intelligence Unit. New York is in seventh place.

The cost of rent is high, especially for the amount of space you get. If you are looking to relocate to Hong Kong, it’s likely you will have to mentally prepare to downsize considerably. Supermarkets can also be expensive and offer limited choices. Imported items such as Western food can be very costly. However, transport (both public and taxis) is cheap, and hiring domestic help is relatively inexpensive. It is also worth noting that while you have to pay tax in Hong Kong, it is lower than in many other countries.

The monthly rent for a furnished studio apartment (480 sq ft) in a central area of the city would set you back about HK$28,239 which equates to £2,830.96 or USD3,597.79. To put it into perspective, the cost of living in Hong Kong is 22% more expensive than in Dubai and 34% more expensive than in Toronto, according to comparisons from Expatisan.

Is It Easy To Find Work?

The most common industries in Hong Kong for expats to work in are finance, law and property. Teaching is also relatively popular. Those who only speak English may find themselves limited with options as the job market is quite competitive. Employers have to prove that they can’t fill a position with a local employee to be able to offer it to a foreigner; bear in mind that ‘local’ also includes mainland China. This means that in order to find work in Hong Kong, you will need to have experience in your sector and a good CV or high qualifications that make you stand out above the competition.

The average working week in Hong Kong is 44 hours. According to Payscale.com, the average yearly salary in Hong Kong is HK$370,959. This equates to roughly £37,236.86 or $47,262.03 (US dollars). Of course, this entirely depends on your industry, experience and job position. For example, the average wage for a marketing executive would be HK$201,556 but for a marketing manager, it would be around HK$416,874.

Can I Retire In Hong Kong?

If your visa is not subject to a limited stay then yes, you can retire in Hong Kong. If you are already retired and wish to move there, you will need to research visa types.

There isn’t a default retirement age in Hong Kong. Employees and employers usually agree on the age of retirement which, as a general rule of thumb, is around 65 for men and 60 for women.

Have you lived in Hong Kong? Share your thoughts in the comments below, or answer the questions here to be featured in an interview!