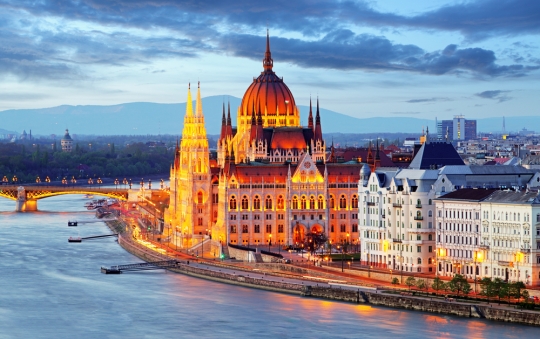 Ever since the early 1990s, Budapest has been experiencing an influx of migrants who choose to make it their home. Due to the fact that English is used the most commonly spoken language for these expats, they are now being catered to in cafes, bar and theatres. Let’s have a look at what you can do in Budapest if you don’t speak the local lingo.

DramaWorks is a professional theatre company in Budapest. It is also a drama school for children and adults alike. In 2018, DramaWorks produced the Pulitzer prize and Tony award winning play Proof in the Spirit Színház (Spirit Theatre). This is an English language play by David Auburn, starring Sloan Thompson, Faye Bradbrook, Scott Alexander Young and Dan Stroiman.

Students of the drama school also put on a number of plays and musicals every year. Even though this is technically amateur dramatics, the staff at DramaWorks are highly trained tutors and directors, meaning the quality is high.

For details of the upcoming performances have a look at the DramaWorks website or Facebook page. If you fancy trying your hand at acting, you can find the details here.

It’s also well worth knowing that a few theatre performances are accompanied by English ‘surtitles.’ Surtitles are like movie subtitles, but they appear on a screen above, below or to the side of the stage during theatre performances for simultaneous interpreting. It is recommended that you double-check if English surtitles will be provided prior booking tickets. Currently the theatres offering surtitles include Katona József Theatre, Madách Theater, the Hungarian State Opera House and the Erkel Theatre. The National Theatre also has quite a few performances with English surtitles. For additional information, click here.

This is the primary fine arts museum in Budapest. Housed in Buda Castle, the collections on display cover Hungarian art in most genres, including the works of many 19th and 20th Century Hungarian artists who were located in Paris and other places in the West. There are guides in English available upon request.

This establishment isn’t what you think; there are no zombies and ghosts jumping out from the dark corners! Instead, this is a former HQ of the communist political police and will take you on a terrifying journey of a different kind. You will be able to see the effects and aftermath of fascism, Soviet occupation, the gulag and persecution.

The House of Terror museum contains a series of prop-filled displays alongside genuine historical artefacts. However, be prepared; this is a pretty popular place and you will have to queue to get in. The museum doors open every 15 minutes in order to let in a handful of visitors at a time.

On a lighter note, if you want to find out all about the history of Hungarian beer, then look no further; this museum is the place for you. The Hungarian version of the saying drinking like a fish is drinking like a pelican. When you find a pub with a sign depicting a pelican drinking from a beer mug, you’ll know you’ve found the right place.

Here you will discover the secrets of the Dreher brewery in addition to old adverts, beer mugs, memorabilia and – naturally – beer itself! A great day out for all you beer aficionados out there. Please be aware that the minimum admission age to this museum is 18.

Although this isn’t strictly an English language space, we have to mention the City Park. You don’t need any language skills to enjoy this place. This is one of the oldest public parks in the world. It is strongly recommended you spend the entire day here wandering around under the shade of the splendid sycamore trees.

You will also find the stunning Vajdahunyad Castle here, which was built in 1896 for the World Exposition. There is a beautiful lake on which you can go for a row in the summer and ice skate in the winter. The outdoor ice-skating rink is the largest in the world and belongs to the national Bandy centre. Here you will also find the Grand Circus, the zoo, the amusement park and the agriculture and the transport museums to name a few attractions – do you see why you need to spend at least a day here?

The original Szécheny baths first appeared in 1880, and were only ever intended to be a temporary attraction. However, their popularity grew, and in 1913 the baths got the permanent building we see today. There is a huge variety of activities and attractions on offer, including but not limited to a natural jacuzzi, swimming pools, thermal baths, Finnish steam rooms and massage rooms.

If you are an avid chess player, you can even enjoy a game whilst you are having a soak! It is widely believed that the natural minerals found in the water here can cure several ailments, especially the likes of arthritis and gastritis.

Have you ever wondered what a former communist information centre looks like? No? Well, if you decide to find out, you should definitely visit the Pantlika Bistro! Aside from the kitsch furniture and décor borrowed from the 60s and 70s era of Soviet Hungary, it’s a great place to come for a drink and a chill with your friends. You can also hire Pantlika for theme parties. Additional details can be found here.

What are your favourite things to do in Budapest? Let us know in the comments below!