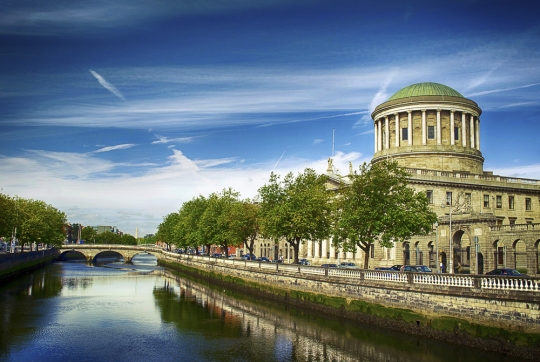 Navigating the school system of a new country can be daunting and put a lot of pressure on expat parents to find the best fit for their child both personally and in terms of getting the best education possible to help those children succeed. For many expat families, the question of where their children will go to school is one of the most important factors to consider in their move.It can be overwhelming trying to get your head around a new school system, researching your options, and trying to make a decision on where to apply. That’s why we’ve created this guide on choosing your child’s school in Dublin. We explain how the school system in Dublin works, what your options are, and give you some highly-rated schools to look into.

The School System In Dublin

The school system in Dublin follows a curriculum outlined by the Irish department of education and science, which is similar to the rest of the UK. Children usually start school at age four to five (depending on their birthday and how this correlates with the cutoff date), but legally do not have to start school until the age of six. Mandatory education in Dublin continues until the age of 16.

The enrolled ages of schools can vary; some may be housed in the same building (such as primary and secondary grades altogether in one building) or in separate buildings. Generally, children will start in primary school (ages four to 11), move on to secondary school (ages 12-16) and then go on to college or higher education (ages 16 to 18) before leaving and either continuing education at university, going into an apprenticeship or a full-time job. Some schools may offer a sixth-form which has the same level of education as college, but some may not, meaning your child will have to apply for a college. Pre-schools for children younger than four do exist, but are not free.

Children will usually be required to study the Irish Gaelic language. However, they can be excused from this if they were educated outside of Ireland up until 11 years of age or if they have a learning difficulty, in which case you will need to apply for an exemption in writing to the school principal.

School times in Dublin usually run from 9am to 1:30 or 2:30pm for younger students at primary school, and 9am to 3pm for secondary school students from Monday to Friday. The school year is broken into three terms, with the main school holidays taking place over Easter, Christmas and summer.

School hours, term times and length of holiday may vary with private and international schools.

Every child in Dublin has the right to a free education up until the age of 18. However, enrolling at public schools in Dublin may be easier said than done, due to the lack of spaces. The majority of public schools accept pupils on a first-come-first-served basis, whilst also looking at catchment areas. This means that if you live within a particular school’s catchment area, you will get higher priority for available spaces than someone who lives outside the catchment area. When a school has reached capacity, children will be put on a waiting list, which is usually prioritised in much the same way.

This can put you at a disadvantage if you are due to arrive in Dublin outside of the usual application times. In order to combat this, it may be a wise idea to research and make a list of schools that you would like to apply for, and contact them well ahead of time. It may also be worth noting that most schools in Dublin are quite openly religious, so you will need to consider whether this aligns with your personal morals and ethics.

Some highly rated public schools in Dublin that you may want to look at are: St Gabriel’s Primary School, St Pats National School and the Guardian Angels National School.

International And Private Schools In Dublin

Dublin has the highest number of private schools in the country, with many offering boarding options. Privately funded schools are not subject to the same rules as public schools, so you are more likely to be accepted in your application regardless of where you will be living and when you apply. However, some private schools may stipulate that your child has to pass an entrance exam to be enrolled.

International and private schools in Dublin tend to be very expensive, and so are not ideal for expat families on a budget. If you are worried about the price implications and whether your child will be on the same level in the curriculum, it would be more cost effective to enroll your child in a public school and look into additional private tutoring.

The difference between private and international schools in Dublin is that the private schools will most likely teach the UK/EU curriculum, whereas enrolling your child in an international school will present the opportunity for your child to study the curriculum and take the appropriate tests that are relevant in their home country, such as the American SATS.

The education for persons with special educational needs act 2004 established an educational framework in Ireland for children with learning difficulties and special needs. Many children with learning difficulties can attend mainstream schools and receive additional support, but if this is not the case for your young person, there are specialised schools in Dublin that meet the specific requirements a child may need.

Some examples of these are: Saplings School, St Mary’s School For The Hearing Impaired and St Declans School.

We hope this guide has given you a detailed overview of how the school system in Dublin works, and what schooling options are available to you and your family. With this information, you should be able to make a decision about which schools to apply for that will best suit your children’s needs and abilities to reach their full potential.

Have you lived in Ireland? Share your thoughts in the comments below, or answer the questions here to be featured in an interview!