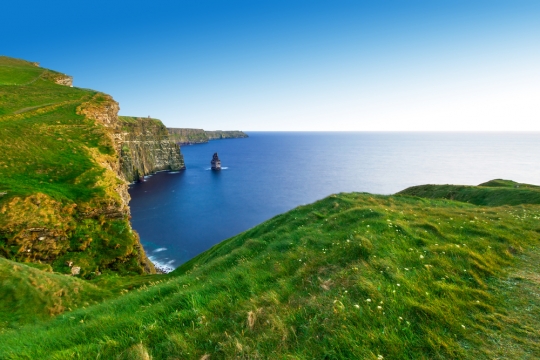 Who hasn’t, over the course of an idyllic holiday, allowed themselves to slip into a fantasy about starting a new life in the beautiful country you are visiting? You drift through the cobbled streets and down to the river, dreamily imagining what it would be like to leave your regular life behind and create a new beginning.However, as we all know, there is a big difference between visiting a place as a holidaymaker and relocating there. What are the different elements that contribute to full time life in Ireland, and is the grass really greener on the Emerald Isle?

Ireland is a country where there are about as many words for rain as Inuit people are rumoured to have for snow, and with good reason. There are, on average, between 150 and 225 days of rainfall per year in our green little country, providing local people with plenty of wet weather conversation topics.

Ireland’s climate can affect life in many ways. The winters are long and dark, with just seven hours of daylight in midwinter. The skies are often overcast and grey, and the weather is very changeable; it is famously said that Ireland often experiences four seasons in one day. For it to rain continuously throughout your holiday is one thing, but it’s important not to underestimate the impact the weather can have over a longer period of time.

Some expats who move to Ireland from sunnier climes find that they experience seasonal depression. The weather can also have an impact on socialising, which mainly happens indoors during the winter months. The clouds have some silver linings though; the countryside really is spectacularly green, and the Irish are great at finding alternative activities inside, with thriving cinema, theatre, music and pub-going scenes.

Visitors are often charmed by the trademark friendliness of Irish people. It’s common to exchange a few friendly words with shop assistants, strangers at bus stops, or people on the street, and it isn’t unusual to have a conversation with a stranger in public. This is all the more true in the small villages, but unusually for a capital city, it is also the case in Dublin.

That said, there are a few things to bear in mind when considering starting a conversation with local people. It is occasionally said that this friendliness can feel somewhat superficial; while it may be easy to strike up conversations with Irish people, it can be hard to establish deeper friendships. However, there is a strong sense of community in many parts of Ireland, and with some time and effort, expats can integrate into their neighbourhood and develop their own connections.

Another social issue is that the Irish are also not known for their directness; it can sometimes be difficult to know whether someone means what they are saying, or if they are merely being polite. For expats from cultures where people tend to be more upfront, these codes can be confusing. Also potentially confusing is Irish people’s tendency to insult their friends. Known as “slagging”, this is actually an affectionate gesture; if an Irish person says something offensive to you, chances are they’re trying to befriend you. If you can laugh it off or make a lighthearted joke of your own, you’ll have struck up a camaraderie.

It is a staple for tourists visiting Ireland to visit a bar. Expats moving to Ireland should be aware that social life revolves around alcohol in a big way. Irish pub culture has many positives, in particular a vibrant tradition of live music. There are a wide range of cultural events to attend in Irish cities. However, in both cities and villages alike, alcohol occupies a central role in much of the socialising, which is something to be aware of if you’re not particularly fond of the pub.

Ireland’s economy took a brutal hit in the global recession of 2008, drastically impacting the job market. However, there has been an upturn in recent years, and at the moment unemployment rates are low. Wages in Ireland are among the highest in Europe, although given the high cost of living, this does not necessarily equate to more disposable income.

Any tourist will tell you that Ireland is an expensive place to visit, and obviously this is more of a consideration when thinking of relocating here. The living wage is considerably higher than the minimum wage currently in place, and one in five Irish workers is earning below this living wage. Working parents should consider that childcare options also tend to be expensive, which affects expats who may not have the support of family living nearby.

When deciding where to move, bear in mind that there is a great disparity between cost of living in the cities – in particular Dublin – and rural Ireland. Dublin’s current housing crisis has led to a highly elevated cost of renting, and the city recently ranked 19th in a list of the world’s most expensive cities to live in, overtaking London.

Prices in the property market are also inflated, having seen a staggering 70 percent increase since the recession-induced low in 2013. Buying property can be a frustratingly slow process in Ireland, often drawing out over months of negotiations. Outside of Dublin, prices are considerably lower, causing an increase in commuter towns springing up in the areas around the capital.

It’s worth remembering that there is not much in the way of local public transport in rural areas, so if planning to move to the country, it’s much easier if you have a car. Health insurance is another cost you will need to factor in to your budget: Ireland has a public health service, but it is recommended to have private insurance as well. In the case of non-EU citizens, private health insurance is a visa requirement for longer stays or residence visas.

Relocating to Ireland means considering these factors that won’t necessarily impact on a holiday but may be more of a challenge over the long term. This should not be a discouragement. As the 12 percent of people living in Ireland who moved there from another country will testify, there are many positives to outweigh these factors. As the saying goes, there is no rainbow without the rain.