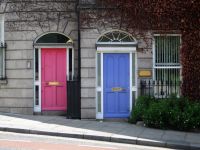 Dublin, the most populous city in Ireland, has attained more and more of an international character as this century has progressed, now being listed as an “Alpha-” city in the prestigious rankings of the Globalization and World Cities Research Network. Though unlikely to ever reach the “Alpha ++” plateau that is lorded over by New York City and London alone, Dublin remains firmly within the top 30 of the world’s most internationally oriented cities (and many who seek out more of a balance between authentic local life and internationalism might argue if an “Alpha ++” ranking is desirable in the first place.)

Over 520,000 citizens now call Dublin home, with another 1.3 million residing in the greater metropolitan area. Dublin and its surrounding counties regularly rank atop the nation in terms of disposable income, and its housing is not necessarily always the most expensive in the nation – locales to the West, like Galway, have been quite competitive in recent years.Temple Bar – fun to visit, but…

Bustling areas like the Temple Bar may have their charms for short-term residents, though individuals with more long-term designs for Dublin might want to carefully weigh the costs of moving there: though there are a few thousand residents of the neighborhood, it is also a heavily-trafficked neighborhood for tourists and various wandering bands of revelers, particularly in and around Temple Bar Square. The neighborhood’s walkability, and its capable hosting of Ireland’s creative industries (see especially the Irish Film Institute and the Temple Bar Gallery + Studios), all provide excellent reasons to make it a weekend destination, though its charm as a place of residency may be lost on professionals aged beyond their mid-20s. A diversity of local businesses, from the City Vinyl record shop to the Eliza Lodge bed & breakfast, all make it a worthwhile area to spend time in, nonetheless.

Thankfully, the Dublin metro area provides plenty of alternatives in which an active social life can still be had without sacrificing peace of mind, or without having to move to one of the more exclusively residential enclaves like Shandon. Although this is not to speak ill of the latter location, which is populated by numerous Edwardian homes resting on the Royal Canal and is the go-to spot for Dubliners wanting access to an 18-hole golf course (Shandon is the site of the Shandon Pitch and Putt Club.)

The Ranelagh suburb, not far from the city center, has a strongly residential character with a good amount of parks / green space (in which you can encounter numerous morning exercise classes being held), and enough of an assortment of highly rated (and often high-end) pubs and restaurants to cater to the tastes of numerous other nationalities. Celebrated local spots include Russell’s, Indian cuisine specialist Kinara’s Kitchen, and The Butcher’s Grill. This neighborhood is also characterized by the Ranelagh Craft Market (operative from Thursday-Sunday), which features a full spectrum of handmade goods and organic foods along with the usual selection of cast-off and handed-down items.

Portobello or An Cuan Aoibhinn is another non-central region to the south (in the Dublin 8 postal district) that has much to offer, and is considered by the locals as having a certain degree of “hipness”. Traditionally the heart of Dublin’s Jewish community – being known as ‘Little Jerusalem’ as a result – the area hosts a number of local businesses as well as the “Golden Mile” of pubs and live music venues that leads back towards the center of the city. The neighborhood has seen many degrees of renovation from the 1960s-1990s, particularly the Grand Canal region. Favorite attractions nearby range from the fairly obvious (the Guinness Storehouse) to spots for the more culturally seasoned, like the Lighthouse Cinema.

Development in the Docklands

Prior to the banking / financial crisis that reared its ugly head in 2008, Dublin was the centerpiece of Ireland’s construction boom. This inspired some truly grandiose projects that, owing to the economic retreat, are unlikely to be seen through: U2 fans will be sad to know that the proposed “U2 Tower,” which would have been the tallest standing structure in Dublin, will not be standing anytime soon as a nightly glowing tribute to the works of Bono and friends.

However, there are areas of the city that are still seeing rapid development and renovation. It might be worth checking into the Dublin Docklands, Ceantar Dugaí Átha Cliath, where some of the boldest urban regeneration projects in Ireland’s history are now underway. For those wishing to settle in completely new digs, with waterfront access to boot, it may be well worth looking into this area.