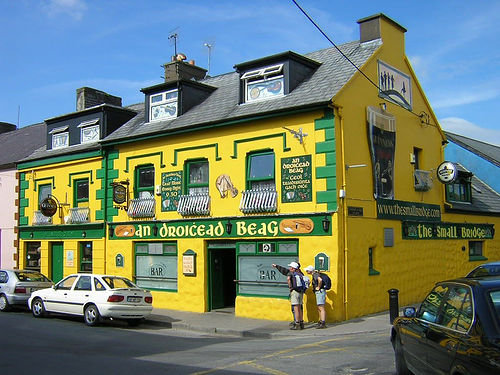 Mention Ireland, and the associations that come to mind will almost certainly be positive – Irish music, both modern and traditional, Irish whiskey, Guinness, the Gaelic language, the Irish accent, Irish literature, and plenty more. Even the more unpleasant associations tend to be filtered through the lens of cinema or nostalgia.

Fortunately, it turns out that the reality lives up to these associations. The recent World Happiness Report published by the UN ranked Ireland 18th in its list of the happiest countries in the world.Ireland is definitely not perfect, but clearly the country is doing something right if so many of its citizens rate their levels of happiness so highly. The great news for expats is that living in Ireland can give them a share of this happiness too. There are of course always the downsides of living away from family and old friends, dealing with a whole new way of doing things, and the change in climate, but for the most part, expats in Ireland find themselves extremely happy with their new lives.

Here are a few reasons why moving to Ireland will probably make you happier.

Especially in the Irish countryside, there’s a great deal of lush greenery, and it all has a certain wildness to it, without being forbidding. The cities of course aren’t as green, but they’re certainly not all concrete and smoke – even Dublin is surprisingly clean.

The quality of life is great.

Ireland ranks highly on many international reports and studies – these include a UN report on children’s well-being across the industrialized world, in which Ireland placed 10th, and others that have looked at factors such as life expectancy and education. Ireland also has the second-highest minimum wage in Europe, the public healthcare system is reasonably good, and private healthcare is mostly quite affordable.

Although it is sometimes reported to be an expensive place to live, this applies mainly to Dublin. In the rest of the country, it’s possible to live fairly cheaply without isolating yourself.

The locals are a great reason to be happy about living in Ireland.They’re warm and welcoming, and almost always cheerful and easy-going, no matter what their circumstances. There’s also a great deal of importance given to family and friends. For expats, this may not matter much in the first year or two, and it may even be a disadvantage – it may take a while to form deep friendships with the locals, and in the meanwhile you can feel a bit left out. However, with time, patience and effort, you definitely will make friends, and they’ll be friends for life.

Alcohol is an integral part of life in Ireland.

There are pubs absolutely everywhere, and alcohol is deeply woven into the social fabric. If you’re a teetotaler, this might be a bit of a problem, but most people love it. The fact that Irish whiskey and Irish beer are as delicious as they are only adds to the happiness.

Crime is low in Ireland

Gun-related violence in particular is almost negligible. There are of course dangerous areas, and crime can suddenly strike even the safest parts of the world, so it’s important not to get careless – but for the most part, it’s possible to live a fairly carefree life in Ireland.

If you love to travel, Ireland is one of the best places to live. The United Kingdom, France, Italy, Spain, Germany – there are few places in Europe that are more than a couple of hours away. (Of course, it’s also important that you have the time to travel, and Ireland can definitely give you that too – almost everyone gets 20 days of annual leave, and if you can negotiate a better deal or stick with the same organization for a few years, you could get even more.)

Have you moved to Ireland? What are your favourite parts about living there? Share your thoughts in the comments.