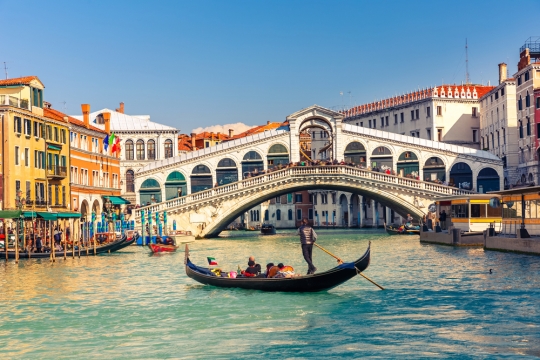 "A different language is a different vision of life." —Federico Fellini

Italian, a romance language originally descended from Latin, is believed to have spread across Europe in the 14th century, following the popularity of Dante’s Divine Comedy. Today, there are about 67 million Italian speakers in the world—a large portion of whom are living within the borders of Italy and Switzerland. Often referred to as the language of love, Italian is amongst the most popular second languages of study in the world. That is a pretty remarkable statistic when you consider that there are only a handful of countries where Italian is spoken as the official language.For expats living in Italy, learning Italian is more than a hobby; it is a necessity. There are a myriad of factors that combine to bring learners to fluency. Some of those elements include confidence, motivation, good study habits, memory, and constant repetition. So, given all of that, how much time does it take to become fluent in Italian?

The answer: it depends.

Before we think about how long it will take you to learn Italian fluently, we have to understand the term ‘fluency’ a little better. The dictionary defines fluency as “the ability to speak or write a particular foreign language easily and accurately.” In other words, a fluent speaker can understand everything they hear and read, as well being able to form arguments coherently, express themselves spontaneously, and be capable of grasping the subtlest meanings in even the most complex situations. That is a lot of skills to master.

On the other hand, ‘proficiency’ is defined as “a high degree of skill; expertise.” It is often used interchangeably with the label ‘basic fluency’, which only adds to the confusion. Let’s say, for the sake of argument, that proficiency in Italian means you have a strong grasp of what is going on, you are able to have conversations at the dinner table, and get the general gist of what is happening on the TV news. You may speak with an accent and not always use correct grammar, but you are able to communicate effectively and form friendships with local people you meet. You may want to ask yourself if that level of Italian is sufficient enough for you, because in truth, it is much easier to achieve.

Factors That Impede Or Advance Your Success

There are several factors that come into play when learning a foreign language. Remember, there is no one-size-fits-all solution to learning Italian, but there are variables that may impede or advance your quest to speak Italian fluently. Here are a few of the major ones.

The Age Of The Learner

Conventional wisdom has it that, if you want to achieve the grammatical fluency of a native speaker, the best time to start learning a second language is by age five. This was thought to be due to changes in our brains in our teens and early 20s.

As of late, however, there have been numerous studies (albeit controversial ones) which challenge the notion that you have to start young to learn a second language. The newest of these theories assert that native-like mastery can be obtained at a much older age (18) than originally thought. None of this means that we cannot learn a second language as an adult, it just means that fluency could take a little longer to achieve as we grow older. However, it is certainly not impossible, so don’t be put off.

Native people learn languages naturally from birth. When we immerse ourselves in a foreign language, we are attempting to mimic this organic process somewhat, creating a greater chance of getting to the level of a native speaker. If we were to combine immersion learning with formal grammar studies, the rate at which we improve grows exponentially. It only makes sense, doesn’t it, that the more exposure we have to Italian, the faster we will learn? Does that mean that you should go out and find yourself an Italian spouse? Well, it couldn’t hurt!

The old adage “you only get out what you put in” was never truer than when it comes to learning a foreign language. It you don’t give Italian your full and undivided attention, you may never reach the level of language you desire. It takes a lot of work to learn a second language, but the rewards make it worth the effort.

Speak as much and as often as you can. This may mean you feel a little foolish on a daily basis, but if you can push through the embarrassment and are willing to make mistakes, you will reap the rewards – speaking Italian like a champ. Note that Italian people can be extremely gracious and appreciative when you show a desire to learn their beautiful language. Go on, parla!

Saturate your brain by using the ‘osmosis method’ of learning Italian. This means watching weird Italian TV, reading the local newspaper every day, listening to the radio in the car, and even telling a joke in Italian. The more you bombard your senses with the Italian language, the faster you will get to fluency.

Soak it in. Don’t only associate with people who speak your native language; this is counterproductive and will keep you from developing deep and lasting relationships with Italian people. Living abroad is a wonderful opportunity to evolve and expand your horizons; don’t waste it by insulating yourself from Italy’s rich culture and heritage.

As we have seen, fluency and proficiency can mean different things to different people. Reaching them can also occur at different rates, depending on the individual. Case in point: expat Toni is an American writer living in a hill town in Umbria. She moved to Italy six years ago and is still struggling with the language.

"Before moving here, I was under the assumption, as many people are, that once I was living in Italy, I would be able to speak Italian fluently in less than a year. The reality is not that cut and dry."

We asked Toni how she feels about not having reached the level of Italian she had hoped for at the onset. “Honestly,” says Toni, “it’s not optimal, but I can speak well enough to converse with some confidence, and I do feel a part of my community. That, in a nutshell,” she explains, “is what it’s really all about.”