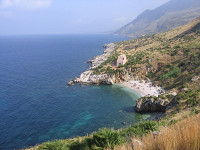 Many famous locations on the globe have been, for better or worse, reduced in the public mind to a single defining feature or concept. If we were to play a simple word association game with famous global destinations, we might get, say, simple reductions like “beach” for Miami, “cowboy” for Texas, or “mafia” for Sicily. Ever since novelist Mario Puzo got the ball rolling in the late 1960s, Sicily – and the U.S. delegation of the mafia to come from there – has been practically fused in the public imagination to the image of sharply dressed, quick-tempered, ruthless underworld operatives who either greet you with a ‘kiss of death’ or by leaving a severed horse’s head in your bed. It’s a captivating image, to be sure, but is it relevant at all for the present day?

Who is Really the Most Dangerous Group in Italy?

The mafia has been historically most active in both rural and urban portions of western Sicily, also hosting a kind of coordinating committee in and around the Palermo region (significantly, this ‘belly of the beast’ has also been the center of anti-mafia activism).If nothing else, the organization has been highly resilient, surviving suppression by the Mussolini regime in the 20th century – their resistance to irrelevancy or extermination has been astutely noted by Raimondo Catanzaro as the result of “a specific combination of ancient and modern, a mixture of private violence and the legitimate violence of the state, of competition for economic resources in the market and the absence of regulatory standards for economic activities other than violence.”

However, we can wonder if organized crime in Italy presents as much of a threat to travelers and expats as unorganized crime. If travel warnings from the U.S. State Department are any indication of things, visitors to Italy from abroad face more of a threat from innovative petty thieves in Rome (who may impersonate police officers or lace your drink with soporific drugs after “befriending” you at a train station), or from carjackers in the Sicilian town of Catania, than from the local mafiosi.

U.S. residents might also be interested to know that the Sicilian mafia are the largest such crime family operating in the U.S., with around 2,500 affiliates in the country, but are only assumed to be the second most powerful organization in Italy proper, playing this second fiddle to the Neapolitan Camorra organization. Drug trafficking, the Cosa Nostra's stock-in-trade, has also become more widely associated in the modern era with another rival syndicate, the ‘Ndrangheta of Calabria (in local geography, the “toe” of the Italian “boot”).

The latter group now claims a membership that is perhaps 1,000-2,000 recruits larger than the Sicilian mafia, with the Guardian reporting a few years back that its turnover of “$35bn (£24bn) a year… surpasses that of the entire annual output of Calabria’s legal economy.” So, if anything, Calabria may be more of an area in which to exercise caution than Sicily.

The mafia in Sicily “officially” renounced its murderous tactics in the 1990s: when the leadership torch was passed to Bernardo Provenanzo, he initiated a campaign of eerie silence known as the pax mafiosa and nixed the policy of murdering informants and mafia-critical government officials. So, though it is unwise to make any long-term predictions here, the Sicilian crime families’ worst years are, for the moment, behind them. Some locals take a cynical view of this, believing the lack of recent violence owes itself more to the fact that the Cosa Nostra is not fighting a civil war than a full renunciation of their criminal enterprises: in fact it is estimated that the majority of Sicilian businesses do pay pizzo (protection money) to the mafia. The nature of the mafia’s extortionist activities is such that travelers, vacationing part-time residents and the like run far less of a risk of encountering them than would local business owners and vendors.

Having said all this, expat residents and visitors to West Sicily are strongly encouraged to curb any problems they have with boorish or discourteous public behavior before making the trip. Though mafia hatchet men may not be waiting at every corner to harass you, the organization’s commitment to honor (and resolutely avenging perceived slights) is something that truly does exist outside of the movies.

Not only will getting in some sort of easily avoided, and possibly intoxicated confrontation with the ‘wrong person’ likely result in serious damage to your person or property, it will also make local police forces less eager to provide assistance. Speaking of intoxicants, the price of maintaining a narcotic habit in Sicily may also be a more intimate relationship with the local mafia, and therefore provide many more opportunities for trouble.

One final word about stereotypes: while it seems disingenuous to finish this overview with a movie recommendation, the 2008 Matteo Garrone film Gomorrah provides a far more up-to-date and realistic image of what a typical mafioso may look like these days. Hint: they look more ‘typical’ than you might expect, down to the flip-flops and basketball jerseys, so the above warnings about common courtesy bear extra weight.