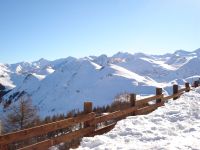 Ski slopes and fresh powder are probably not the first things that spring to mind when thinking about about a getaway to Italy. However, the distribution of winter resorts throughout the country is impressive enough to shock those who base their idea of Italy’s terrain upon repeat viewings of Sergio Leone’s ‘spaghetti Westerns.’ It may not have the reputation of the French Alps, yet the considerable landmass of Italy – 116,347 square miles all told – is able to support over 100 ski areas and resorts.

At least 40% of Italy’s terrain is mountainous, with topographic maps showing the massive Apennine range extending to almost the full length of the Italian peninsula. Winter sports enthusiasts are therefore spoiled for choice here whether they reside in the north of Italy or in Sicily, and should have no trouble finding outlets for skiing, snowboarding, and other activities requiring the aid of snowfall and cold temperatures. As such, it should come as less of a surprise that Italy fields a national men’s ice hockey team with a number of respectable finishes (in spite of their regularly having to contend with the impassable forces of Eastern and Northern Europe.)Of course, being ‘spoiled for choice’ can also mean never being able to make up your mind, especially if you are not tethered to one particular region of Italy and are free to roam. Hopefully this introductory list can present some valuable starting points en route to your eventually conquering the slopes of Italy.

One of the more internationally known skiing strongholds, Ski Piemonte is located in the northwestern Piemonte region of the country, and comprises over 50 resorts. It owes much of its fame to its selection as a venue for hosting the 2006 Winter Olympic Games. The region is often advertised as being suitable for skiers of all skill levels and as having attractions that go beyond the scope of athletics (such as the locally prepared cuisine), so those who want to be exclusively in the company of ‘hardcore’ skiers might want to look elsewhere.

Those who just want an all-around more “exclusive” experience should set their sights on the Cortina d’Ampezzo winter sports complex nestled in the southern portion of the Dolomites shared with South Tyrol (by the way, many of the peaks in this area will allow for year-round skiing.) The Cortina d’Ampezzo has also achieved some international fame as being the backdrop of a typically over-the-top action sequence in a James Bond caper (For Your Eyes Only), and, again, as the host of a Winter Olympics in 1956. It is a popular destination for the European gentry, but well-heeled sports enthusiasts will find much here to enjoy besides the socializing opportunities: events such as the Dolomites Gold Cup automobile race [Coppa d’Oro delle Dolomiti] bring sporting events to the region that extend beyond the usual skiing fare. Ice hockey is also represented here by SG Cortina, who play in the Italian elite ‘Serie A1’ division.

Further east in the Dolomites is Val Gardena or Gherdëina, which has hosted at least one FIS skiing championship (1970), and is also home to the storied Saslong downhill course. Followers of professional skiing will already recognize the course as a stop on the World Cup circuit, hosting both downhill and super-G [giant slalom] events. As the prestige and challenge level of these events might suggest, this spot should weed out all but the gutsiest beginners – the rapid succession of “camel bump” ski jumps will be particularly tough on novices. Meanwhile, the surrounding area features a distinctive folk culture based in the speaking of Ladin (not a typo – it is a minority language distinct from Latin and spoken in 54 Italian municipalities.) It is also home to a rich tradition of carving wooden toys.

Courmayeur, resting at the foot of the formidable Mont Blanc, is an area not far from Piemonte. This location presents its own opportunities for outdoor fitness, particularly mountain hiking. Though maybe not having the same professional skiing profile as Gherdëina, the lure of skiing or mountaineering along the highest peak in the European Union may be irresistible to those with an adventurous spirit (Mont Blanc is shared with the French region of Chamonix on its opposite side.) Plenty of après ski activity is advertised for Courmayeur, as well as a generously stocked shopping zone complete with ice-skating facilities – so tourism may be more important in this area more than sporting competition.