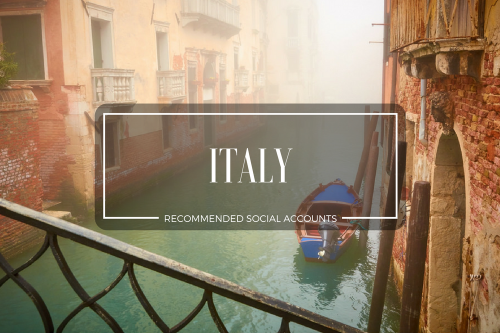 At Expat Focus, we like to be on the lookout for resources around the web that could help prospective expats adjust to their new countries. Today, we’re taking a look at Italy and some of the social media accounts you should be following if you’re thinking of moving there.Expat In Italy
Facebook Page

Swapping fresh Florida Oranges for freshly made mozzarella, the authors of this Facebook page share their lives, decisions and challenges far from their original home. Visiting their son who was stationed near Naples in 2000, the beautiful countryside cast a spell over them, causing them to pack up their lives for a life more continental. Written with a wry tone, the articles are of interest to anyone looking to make their own move to Italy.

An English news source, specifically curated and written for expats based in Italy, The Local is a collection of engaging and timely articles about important issues. With topics ranging from natural events to guidance on settling into the cultural expectations of Italian life, this is definitely a source of information to bookmark and keep following – perhaps with a gelato in hand.

Leaving behind a corporate style 9-5 role that evoked no satisfation, the handsome author of this Facebook Page decided to live ‘the dream’ in Italy while earning a living entirely online. This online presence is his effort to answer the question “How do you do it?” This is a newly launched platform that holds much promise in the next few months.

Making her home in Firenze, Toscana, this fashionista is cutting a swathe through Italian streets both with her adventures and her wrangling of the written word. This former finance PR reached a burnout point resulting in a move to the more languid pace of Italian life, and now she shares tips, truths and hard tested recommendations through her blog The Blonde Citizen. Originally a passion project, this move has taken her in a stylish new direction that should definitely be followed.

Setting up camp in the ancient home of Romulus and Remus is an adventure for anyone, and this suite of social media platforms is a great tool to link up expats, diplomats and locals alike. Fun-loving professionals meet up in person every Tuesday night to make new friends and connections, but their online presence is a welcoming society of advice, a chance to practice mother-tongues and generally just have a good time.

Australians in Italy – Australiani in Italia is a closed Facebook Group that takes the claim of first Ozzie Facebook Group specifically set up for expats living in Italy. They launched it for every Aussie who has moved to or lives in Italy to stay in touch or just natter about the latest goings on in Neighbours, the classic soap drama. For more laid-back jokes and wistful recollections of a particular yeasty toast spread than anyone thought possible, join now.

Jaime claims to ‘just be a girl who fell in love abroad’, but she also created the blog A Bite Of Culture, an endless source of travel inspiration, a boundless passion for culture and a soupcon of gourmet wanderings that tantalize the taste buds. Her social media accounts are a pantheon of adventure all over Italy and throughout Europe, alongside escapades further afield, not to mention a few realities of living as an expatriate. Warning: reading may cause hunger.

As the social media section of a personal lifestyle blog, this medley of social media platforms showcases the passions of Zuzi, a blogger, photographer and witness to the Italian Dolce Vita. Friendly, helpful and sweet, the adventures of this globetrotting expat are ones to delve into. But, be prepared for envy that only the slaking of wanderlust could possibly assuage.

Proudly flying the Union Jack alongside il Tricolore, this tea-adoring and friendly association of expats organise pinky-raising gatherings, share interesting events and disseminate helpful articles on life under the Tuscan sun. Founded in May 2010, the objective of the Association of British Expats in Italy has always been to provide a focal point for British citizens residing in Italy, for those who are thinking of re-locating to Italy and to also promote British interests in the country.

This beautifully curated Facebook Page may just convince unsure expats about making the plunge to la dolce vita in style. Specifically set up for as a network for English speaking expats living in Monferrato, Piemonte the articles are warm, welcoming and always accompanied by breathtaking images taken by the author.

We’re always on the lookout for more accounts to feature – if you write about living in Italy on social media, leave us a link in the comments and we’ll take a look!