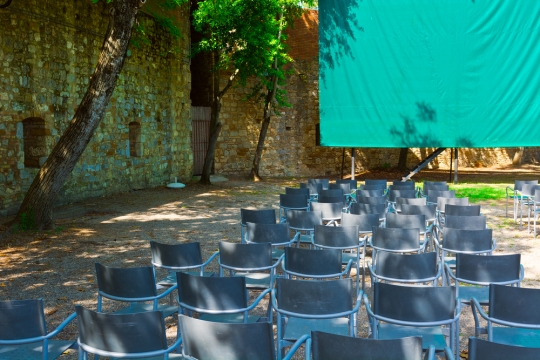 On balmy summer evenings, Rome’s Piazza San Cosimato is positively buzzing with activity and excitement. As the sun sets on the quintessentially Roman neighbourhood of Trastevere, the main square is where residents and visitors alike gather to partake in one of the most highly anticipated events of the season: Rome’s open-air cinema.Fortunately, San Cosimato isn’t the only venue in town. In fact, all over the eternal city you’ll find pop-up outdoor movie theatres, presenting a unique and wide array of Italian and international films, most of which are shown in their original language with Italian subtitles. Running from early summer through to early autumn, this is your chance to see works by the likes of Fellini, Tarantino, De Sica and Disney. Many of the festivals’ screenings include live discussions with filmmakers, screenwriters, directors and cast members. Italian cinema is a significant part of Rome’s cultural heritage and, in the summertime, is the hottest ticket in town.

Here is a list of Roman outdoor cinemas where you can be mesmerized by film under the stars, all’aperto.

After being shut down for several years over a legal dispute with the city, this rather ambitious project in Piazza San Cosimato has come back stronger than ever. Expanding to include three other locations – John F. Kennedy high school (Trastevere), Porto Turistico di Roma Marina (Ostia), and Casale della Cervelletta (Tor Sapienza) – Il Cinema in Piazza’s San Cosimato site features a fenced-in playground, allowing parents to enjoy vintage or contemporary films while their little ones squeal and scamper about with their playmates.

It’s a win-win for everyone. The festival lasts from June to September, projecting more than 190 films onto giant 12×8 metre screens for everyone’s viewing pleasure. For more information and a full programme go to Il Cinema in Piazza's website or email info@piccoloamerica.it. Admission is free.

The location is, without a doubt, one of the most spectacular places to watch a film in the Italian capital. Why not make it dinner and a movie; in the summer, the island is transformed into a temporary village with gourmet pizzerias, chic bars and English-style pubs. For a complete calendar of all the upcoming events go to Isola del Cinema, call (+39) 0658 333113 or email segreteria@isoladelcinema.com. Admission is between five and seven euros.

Founded in 2001, this year Casa del Cinema hosts a film festival called Caleidoscopi. Featuring an international line up that pays homage to such great Italian filmmakers such as actress Anna Magnani as well as directors Roberto Rossellini and Franco Zeffirelli, the breezy outdoor setting under Rome’s iconic umbrella pines in Villa Borghese park (Largo Marcello Mastroianni 1) alone is worth a visit.

Since 2017, the organizers of Live Cinema have been on a mission to awaken the cinema lover in all of us. As part of that quest, they wanted to find a unique location in which to share their beloved celluloid with the viewing public.

Cinemagoers have an outstanding opportunity to chill out on sofas and comfy armchairs while sipping cocktails and munching on snacks. Expect special guests and cool workshops. Go to Live Cinema's Facebook page to learn more. Free admission.

Now in its 20th year, Notti di Cinema a Piazza Vittorio transforms the area around Piazza Vittorio – a neighbourhood known for its diversity and exotic restaurants – into two huge arenas that seat nearly a thousand people at a time.

Equipped with jumbo screens, D-Cinema 2K projectors and Dolby Digital Surround 7.1, the piazza also has a happening food village and a dedicated playground zone for kids. Notti di Cinema has all the makings for a lovely, laid-back night out on the town. Go to Notti di Cinema a Piazza Vittorio for more information. Admission is six euros.

Capturing the enchantment of cinema and providing an escape beyond the fourth wall, Fabrique du Cinéma screens movies in the stunning, romantic summer setting of Parterre (Farnesina Social Garden).

Each Wednesday in the months of June, July and August, Ponte Milvio’s Parterre garden provides an outstanding spot from which to appreciate the best of Italian cinematography. Check out Fabrique du Cinéma's website for a complete programme and to see what they have to offer throughout the year.

Famously known as ‘Hollywood on the Tiber’, Cinecittà is the largest film studio in Europe. Constructed during the Mussolini era, it became a bastion for the Italian neorealism movement after WWII, creating such classics as Roman Holiday (1953), Ben-Hur (1959), Federico Fellini’s La Dolce Vita (1960), Cleopatra (1963), and Zeffirelli’s Romeo and Juliet (1968).

The free festival is organized and managed by Cinecittà Bene Comune in collaboration with Cinecittà Studios. The Cinecittà Film Festival, which returns for its fifth year, happens in mid-July. Find them on Facebook.

Check out these venues for more places for cinema al fresco in Rome.

"Talking about dreams is like talking about movies, since the cinema uses the language of dreams; years can pass in a second, and you can hop from one place to another. It's a language made of image. And in the real cinema, every object and every light means something, as in a dream." – Federico Fellini

Have you lived in Rome? Share your local tips in the comments below, or answer the questions here to be featured in an interview!