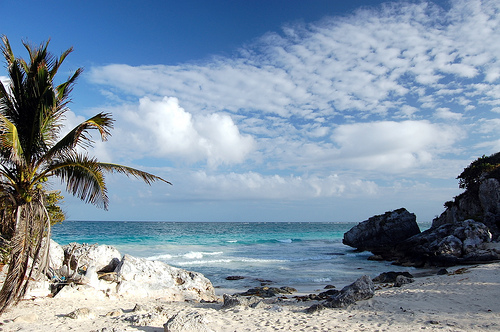 Jamaica is one of the most well-known and popular countries in the Caribbean, a small island not far from Cuba and the Dominican Republic. For most people, Jamaica seems like a picture postcard: beaches, sunsets, tropical summer, rum, and reggae. This image of Jamaica is cliched but truthful – everything we just mentioned does exist there. But of course, there’s always more to a country than the picture postcard; some of it is great, and some of it isn’t.Here are five things expats love about living in Jamaica, and five things they hate.

The food: Jamaican food uses a generous amount of herbs and spices, and for some foreigners, it can take a bit of getting used to. However, those who can get past the initial intensity of the flavors begin to really relish their uniqueness and complexity. Classics like Jamaican jerk chicken and the national dish of ackee and saltfish are the most popular, but Jamaican cuisine is vast and varied, and there’s plenty to explore.

The language: Jamaica’s official language is English, but what most Jamaicans speak (and what most people across the world have some familiarity with due to the influence of Jamaican music) is Jamaican patois, a mix of English and some amount of African and Native American languages, with a unique grammar and syntax of its own. It’s a delightful language with a lilt and swing; some things just sound better in patois.

The people: The charm and warmth of the Jamaican people are often part of the picture postcard vision of Jamaica, and while the other elements of that vision are often taken at face value, foreigners are sometimes skeptical about the Jamaicans themselves. After all, doesn’t Jamaica have a crime problem? But it’s true – in the experience of most expats, the people here are warm, friendly, helpful, cheerful, and hardworking but easygoing.

The music: Reggae music is of course Jamaican and is known the world over, but there are several other styles, including ska, rocksteady, and raga, that all originated on this little island and can still be heard almost everywhere you go. It isn’t hard to find a live local band in Jamaica, and nothing beats listening to live Jamaican music in Jamaica.

The natural beauty: Jamaica’s beaches are its most famous asset, and deservedly so, but there’s plenty more natural beauty on the island, including other coastal attractions such as the bays and fishing villages, as well as the mountains, rivers, and waterfalls further inland.

The driving: Driving in Jamaica can be stressful, painful, and dangerous. The quality of the roads is quite poor, although in recent years, at least some of them seem to have improved. Driving etiquette isn’t great, whether you’re talking about annoyances like high beam headlights or truly dangerous behavior like drunk driving.

The crime: Crime is a major problem in Jamaica, ranging from petty crime and scams to serious violence. Some areas are of course better than others, but even in areas that are typically described as safe, burglaries are sometimes known to occur.

The poverty: Desperate, abject poverty is not as common in Jamaica as it is in some other countries. However, poverty and inequality are still quite severe and widespread, and many people have to struggle to earn a living. This of course is partly what drives the crime and violence, and it also drives begging and various street scams.

The customer service: Jamaicans are generally friendly and helpful, but the standard of customer service in the country is rather poor. This is due to a combination of factors including poor pay, the easygoing Jamaican attitude, bureaucracy, and badly organized systems.

The corruption: To get something done in Jamaica, you will often need to bribe someone. Moreover, there is widespread corruption even in the police force – you will sometimes need to pay a bribe just to get the cops to act on a complaint, and the traffic police are notorious for expecting bribes.