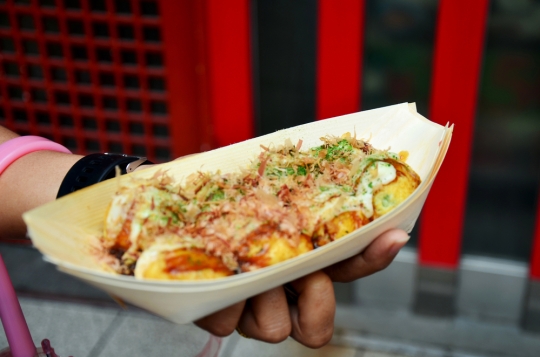 Japan’s geographical location sits in the middle of four bodies of water. In addition, it has a temperate climate, sufficient rainfall and fertile soil for agricultural farming and fishing, all of which provide a wealth of food sources for the country. A world-leading commercial fishing industry means seafood constitutes the base for dishes eaten by local people, alongside regionally grown rice, soybeans and vegetables. A meal often consists of steamed white rice, miso soup and a few side dishes (okazu) such as pickled vegetables. This balance of food types represents the traditional cuisine of the country (washoku).Whilst the core ingredients of the average Japanese meal have remained unchanged for centuries, European, Indian and Chinese influences have become woven into the food identity of the nation. Imports such as tea, ramen and curry are now commonplace on Japanese menus, side by side with local staples and delicacies. With forty-seven prefectures set across a series of diverse islands, Japan’s cuisine presents a multitude of both regional and internationally-influenced dishes that offer more than just sushi.

Hokkaido (北海道) is the northernmost part of Japan, the second largest island in the country and is known as the ‘kingdom of food’. This island boasts a plethora of unique dishes which have satisfied local palettes for many centuries, also exciting visitors who travel there to sample its delights.

Ishikari Nabe (石狩鍋レシピ 作り方) is a fish-based dish originating from Hokkaido. This salmon hot pot has a deep flavour drawn from seasonal vegetables stewed in a miso soup base and a seaweed broth. Local salmon straight from the Ishikari River is the centerpiece, with other key ingredients including tofu and sake.

In the northeastern part of Honshu (本州), Japan’s main island, lies the Tohoku region (東北地), famous for its harsh and snowy winters as well as its rugged mountainous terrain. This region has a broad range of seafood as well as farmed fruit, vegetables and grains in its regional dishes. Typical dishes from this area are warm and comforting, often with a soup or broth base which help combat the cold winters.

Ichigoni (農林水産省), translated as ‘boiled strawberries’ is not, as one might think, a dessert. Instead, this is an abalone (marine snail) and sea urchin soup flavored with soy sauce and salt. The name refers to the appearance of the sea urchins in the opaque broth of the soup, said to be like wild strawberries in the morning dew. Ichigoni is also available to purchase from convenience stores and supermarkets in canned form.

The Kantō region (関東地方) is located in the centre of eastern Honshu. This region includes the Greater Tokyo Area. Whilst this area is highly developed, industrialised and urbanised, the food is still steeped in tradition, with humble fishermen’s dishes lasting the test of time alongside more modern interpretations found in the cities.

Namerō (なめろう) is both a method of preparing fish and a dish itself, passed down from the fisherman of the Boso-hanto Peninsula. Ingredients include flying fish, sardines and horse mackerel with pacific saury. Miso is added to the diced fish along with ginger, green basil and leeks. The mixture is ground down until a paste is formed. The dish can be cooked in many ways, from dry roasting to steaming. It can also be treated using non-heat methods such as pickling, curing or fermenting.

The Chūbu region (中部地方) is situated in the heart of Honshū island and reaches from coast to coast. Its diverse terrain includes the Japanese Alps and Mount Fuji, the highest mountain in Japan. The Japanese Alps divide the country, with the snowy winters on the north side and sunny winters on the south. From stewed grasshoppers to pumpkin and miso broths, this region also offers drier meat, rice and raw fish dishes, as well as dumplings.

Oyaki Dumplings (おやき) originate from the Nagano prefecture and consist of fermented buckwheat flour dough stuffed with sweet bean paste and seasonal vegetables. The vegetables are stir fried in soy sauce and miso, then folded within the dumpling, which is pan-fried and steamed. These dumplings are frequently eaten with tea or for lunch and offer a cheap and filling meal for locals, who also make them at home. The fillings can vary from shimeji mushrooms and Japanese pumpkins to leeks or a host of other ingredients.

In the southern central area of Honshū is the Kansai region (関西, かんさい), home to the cities Osaka, Napa and Kyoto. Regional food in this area is famed for its soy sauce and flavoursome dashi stocks. Osaka is a city particularly known for its insatiable passion for food, with local people eating out as often as they can afford.

Takoyaki (たこ焼き / たこやき) are grilled octopus balls eaten as a snack. These grilled puff balls are classified as dumplings. They consist of a centre of diced octopus combined with tempura scraps, green onion and pickled ginger. The filing is then coated with a wheat flour batter. They are cooked in a molded pan specifically designed for this dish. The snack is finished off with a brushing of Takoyaki sauce, Japanese mayonnaise and a seasoning of dried bonito and aonori.

Chikuwa (竹輪) is a hollow, tube-shaped fish cake eaten as a snack and made by combining a fish paste blend (surimi) with bass or other white fish. Once combined, the paste is spread out and rolled around a metal stick or bamboo, then broiled or steamed to finish. A popular vegetarian variant is known as Tofu Chikuwa.

Shikoku (四国) is the smallest of the four principle islands of Japan. Essentially a rural island with a mild climate, the four provinces which make up Shikoku have their own unique, traditional food culture due to the mountains that separate them.

Katsuo no Tataki (鰹のタタキ) is a famous fish dish from the Kochi prefecture in Shikoku. Katsuo is also called skipjack tuna or bonito, and is a fish of great renown in Japan. To make this dish, a fillet of katsuo is seared over a straw fire so that the centre remains rare and the outside turns a golden colour. After being carefully sliced, the fish is served with accompaniments such as shiso leaves, garlic, spring onions, leek and a dressing of soy sauce and citrus.

Kyushu (九州) is the most southwesterly island in Japan, and the third largest island. Previously a main trading port in Japan, the area enjoys an intriguing combination of regional and international dishes. The locally grown food products are soy, sweet potatoes and rice due to the temperate and subtropical climate.

Karashi renkon (辛子蓮根の作り方) is a specialty dish from the city of Kumamoto. It is composed mainly of lotus root, covered in a mixture of miso, honey, dry roasted unohana and Japanese chilli before being deep fried. To serve, the lotus root is sliced and eaten toasted or with Japanese mayonnaise or soy sauce. It usually comes with plain white rice and sake, which help combat the spicy kick that can come as a surprise for visitors.

Whilst Okinawa Island (沖縄) is a prefecture of southern Kyushu and not a separate part of Japan, it deserves a mention due to a remarkable dish which is highly nutritious and packed with vitamins and fatty acids.

Umi Budo (Caulerpa lentillifera) translates as ‘sea grapes’, and is a green algae found in Indo-Pacific coastal regions, in particular Okinawa. Also known as green caviar, this form of seaweed looks like shiny green pearls. Umi Budo is washed lightly then soaked in water at room temperature for just a few minutes. It is eaten raw and accompanied by dips such as ponzu, adding a tanginess complementary to the salty taste of the grapes.

To say that Japan can only be defined by its internationally recognised dishes is to limit the full range of food on offer in this fascinating country. Whilst sushi, ramen and Japanese curry are all national dishes, they are just the surface of the complex array of dishes influenced by history, tradition and rituals still practiced in the country today.